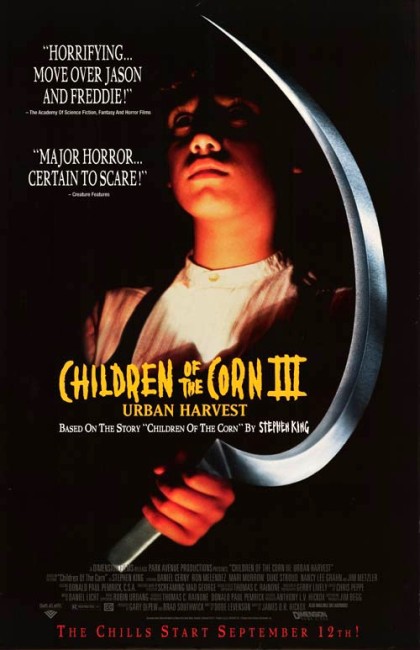 Two brothers from Gatlin, Eli and Joshua, are fostered out to commodities trader William Porter and his wife Alice in Chicago. Eli brings a suitcase full of corn with him and plants it in the abandoned factory next door where it grows at a remarkable rate. William finds the corn and wants to market it. Eli wields an increasingly malign influence over the children at school and he and the corn kill all that threaten them. Joshua begins to dig into the past concerning the Gatlin Massacre and realizes that the power behind the corn comes from a Satanic Bible buried in the Gatlin cornfields and that destroying it is the only way of eliminating the evil.

However, this third film is astonishingly awful. It was directed by James D.R. Hickox who is the younger brother of Anthony Hickox, who has etched out a position in the genre directing makeup effects-heavy sequels to other people’s films – Hellraiser III: Hell on Earth (1992), Warlock: The Armageddon (1993), as well as Waxwork (1988) and sequel, which homage classic horror – and who serves as Executive Producer here. The father of both is Douglas Hickox, who made the camp classic Theater of Blood (1973).

The only originality that Children of the Corn III: Urban Harvest adds to the series is to transplant the basic premise to an urban setting but once there creativity appears to have run to an end. The rest of the film gives the appearance of having been made up as it was going along – demonic patches of super corn, a possessed kid, Satanism, murders every few minutes, business conspiracies, some nonsense about a Satanic Bible being the source of the demon’s power. Trying to make sense of it is a waste of time – on a plot level, the film collapses into incoherent silliness.

Like most of the films that Screaming Mad George’s makeup effects are attached to, Children of the Corn III: Urban Harvest is best appreciated on the level of surreal shock effect. However, some of these effects are extraordinarily daft. Yvette Freeman for no apparent reason stops while being pursued by possessed kid Daniel Cerny to light a cigarette, only to accidentally set her head on fire; Nancy Lee Grahn flees from the corn patch only to trip and impale her head on an exposed pipe, whereupon the pipe starts spurting blood up out through her forehead.

The affair gets progressively sillier – likes the scenes being pursued by the boys’ father turned into a scarecrow with piercing blue eyes. Or the scene where Jon Clair is attacked by corn tendrils and has his neck stretched up into the air nearly his entire body length before it pops off and produces a ten-foot long spinal column; or where Daniel Cerny and Mari Morrow feed the evil super-corn to her parents whereupon they start spitting up insects and their heads split open to reveal they are filled with bugs. The film saves its most ridiculous set-piece for the climax, featuring the manifestation of He Who Walks Behind the Rows, which looks like nothing less than a giant Lovecraftian puppy dog.

In this interesting trivia stakes, the film features the first screen performance from an uncredited Charlize Theron as one of Daniel Cerny’s followers.

James D.R. Hickox has subsequently gone onto helm several other horror films including The Gardener (1998), Blood Surf (2000), Sabretooth (2002), Girls Gone Psycho (2006) and Detention (2010), all of which have attracted astoundingly bad reviews.