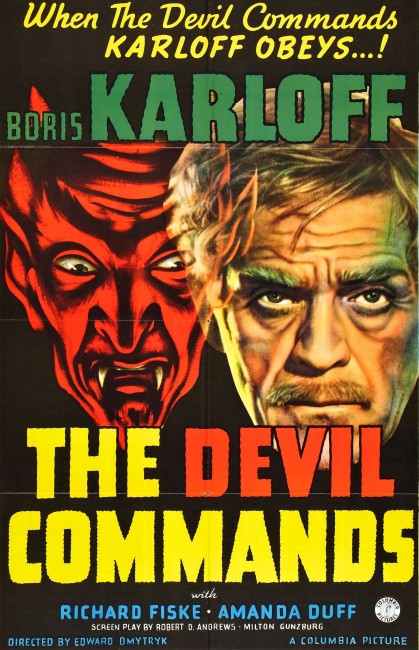 Dr Julian Blair demonstrates his invention – an apparatus that is capable of recording human brainwaves – to a group of fellow scientists. Shortly after, Blair’s wife Helen is killed in a car accident. Distraught, Blair returns to the laboratory and is startled when the apparatus starts displaying Helen’s brain pattern. He realises that this means her spirit is still alive. Blair’s assistant Karl drags him to a seance held by Blanche Walters. Blair exposes her as a fake but also realises that Blanche has great power as an electrical receiver. Bringing her to his laboratory and trying to get her to channel Helen, he accidently electrocutes Karl, leaving him reduced to a dim-witted imbecile. Mrs Walters conspires with him and they relocate to Barsham Harbor in Maine where they rent a big old house and set up experiments anew. There however, the disappearance of bodies from the local cemetery causes the locals to mutter fearfully and demand to know what is going on inside the house.

The Devil Commands was one of the numerous mad scientist films made throughout the 1930s and 40s. Bela Lugosi became the undoubted star of these in a great many efforts made at various poverty row studios. Boris Karloff, Lugosi’s rival for the era’s No 1 horror star throughout this era, also made a number of these, although his were generally better budgeted. At contrast to Lugosi who was always calculatingly evil, Karloff’s scientists tended to be more sympathetic – here, for example, it is his female companion (Anne Revere) who urges far more extreme actions than he does.

The Devil Commands – a title that bears little to do with anything that happens in the film – is one of the mad scientist films of the era that has gained a good reputation, largely due to it being featured in William K. Everson’s Classics of the Horror Film (1974), a fine and influential book that was nevertheless heavily biased towards films of the 1930s and 40s. Looking back now, The Devil Commands seems an interesting effort, better made than most, although far from a standout classic.

The mad science is accompanied by familiar lines – “There are things human beings have no right to know”, “We don’t know what evil might be lurking behind that veil”, “What if you let loose on humanity something far worse than any fear that haunts us now?” If you consider that this is a group of Karloff’s scientist peers discussing his plan to use an EEG machine and his certain belief that a set of alien patterns are coming from his dead wife, you might understand just what a fearful and backward-looking manner it was in which mad science cinema viewed the process of scientific enquiry.

Elsewhere, when Karloff sets up base in a small Maine town, the locals fearfully mutter and demand access to his lab for no other reason than that he is a scientist conducting experiments in a big old house. Invariably, a local lynch mob bursts into the house at the same time as the experiment goes awry and brings the entire laboratory crashing down on top of Karloff. It is hard to think of any other mad science film of the era that embodied the fear of science at such an hysteric level.

This is also the oddity of a mad science film that creates all the usual fear and anxiety about a device that had actually been built in the real world at the time the film was made – namely the EEG, which was first constructed in 1924. Rather more amusingly in contrast to today’s routine devices, the one built in the film takes up an entire room with a bank of electrical equipment that fills one whole wall, the subject bound in a full body suit with something like an oblate diving helmet covering their head, while the recordings are created by a giant stylus arm writing the wave patterns on a rolling slate that takes up another wall.

The Devil Commands is a better budgeted mad scientist film than the ones being churned out by Monogram and PRC but, at contrast to Everson, I would argue that director Edward Dmytryk does nothing terribly remarkable with it for the most part. The one scene he does something eerie is where maid Dorothy Adams sneaks into the laboratory and comes across a circle of bodies each covered in tarpaulins, where she then inadvertently activates the switches and starts electricity coursing through the bodies before she is accidentally electrocuted. The climactic experiment is something eerie with the covered bodies around a table, lit up by electricity flowing through them, and with Anne Revere sitting at the head of the table connected to all of them via a diving helmet with two giant diodes poking out the side.