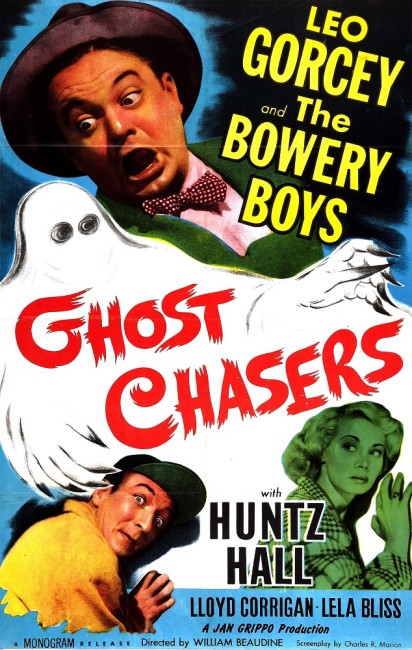 Skip Mahoney finds his friend Whitey has started a fake medium scam operating out the back of Louis Dumbrowsky’s diner. Skip then finds his neighbour Mrs Parelli is being dragged into a medium’s scam by to contact her dead son. He sets out to bust the scam. To do so, he sets up a medium racket of his own up to trick Louis out of $100. Busting the scam leads to the celebrity medium Margo. As Skip and friends set Louis up to expose Margo, Sach Jones is contacted by the ghost of the pilgrim Edgar Smith who invisibly comes to their aid throughout the caper.

The East Side Kids, also known as The Dead End Kids and The Bowery Boys, were a comedy team who enjoyed popular appeal throughout the 1940s and 1950s. The complement of the gang changed considerably through their various incarnations, although the most famous of the faces were Huntz Hall and the gang’s leader Leo Gorcey. The East Side Kids actually started as a serious attempt to portray juvenile delinquency in Sidney Kingsley’s play Dead End (1935) and this was filmed in 1937, after which various of the actors went on to play similar characters in various dramas, most notably alongside James Cagney in Angels With Dirty Faces (1938) and Humphrey Bogart in Crime School (1938), and even in several serials Junior G-Men (1940), Sea Raiders (1941) and Junior G-Men of the Air (1942). Low-budget producer Sam Katzman relaunched the Dead End Kids as The East End Kids in 22 no-budgeters at the poverty row studio Monogram, beginning with East Side Kids (1940), where their adventures were played for comedy. Lead player Leo Gorcey took control of the series in 1946 and rechristened them The Bowery Boys for a further 48 pictures over at Allied Artists, churning out an average of four films a year. The series ended with In the Money (1958), although Gorcey had departed six films earlier.

Ghost Chasers was the 22nd of the Bowery Boys films. By this point, the Bowery Boys films had become Leo Gorcey vehicles and he gets the lion’s share of the screen time here. Huntz Hall runs a second place but the other actors barely get a glance in. That said, Gorcey has his act polished to perfection by now. The opening scene with he talking to waitress Jan Kayne in a lightning fast series of malapropisms is one of the most polished comedy scenes in any of the East Side Kids/Bowery Boys films.

The Bowery Boys/East Side Kids delved into the Old Dark House genre a number of times with several films with interchangeable-seeming titles – Spooks Run Wild (1941), Ghosts on the Loose (1943), Spook Busters (1946) and Spook Chasers (1957). In all of these, any actual ghosts were revealed to be mundane in nature. Ghost Chasers proves the one exception where the ghost of a pilgrim (Lloyd Corrigan) appears as an Invisible Companions that only Huntz Hall can see and comes to their aid several times. The ghostly pilgrim also has the strange novelty of Breaking the Fourth Wall and addressing the audience directly to introduce himself.

I enjoyed Ghost Chasers more than the other East Side Kids/Bowery Boys comedies I had seen. They have their comedy to a fast-paced, knockabout routine that proves perfectly likeable for the most part. The plot doesn’t bear close inspection – Leo Gorcey is outraged at his neighbour Argentina Brunetti being taken in by a fake medium racket and sets out to expose fake mediums. An absurdly contorted contrivation then involves him conducting his own medium scam to rip off cafe owner Bernard Gorcey (Leo’s father) for the $100 so that Argentina Brunetti can get the money to pay for her medium session. Despite regarding Bernard as a mark, Leo then pushes him to seek a session with ringleader Margo the Medium (Lela Bliss) so that he can bust her. The latter quarter of the film becomes much slapstick running around Margo’s mansion.

Director William Beaudine had a prolific career that lasted from the 1910s until his death in the 1970s. He was mostly known as a director who could shoot fastly and cheaply. He made some 350+ films, although this figure is misleading as many of these were silent films and not feature length. Beaudine did make a number of other genre films, including the Old Dark House film The Living Ghost (1942), the comedy Lucky Ghost (1942), the mad scientist film The Ape Man (1943), the East Side Kids Old Dark House comedy Ghosts on the Loose (1943), the mad scientist film Voodoo Man (1944), the mad scientist film The Face of Marble (1946), the East Side Kids/Bowery Boys Old Dark House comedy Spook Busters (1946), the mad scientist comedy Bela Lugosi Meets a Brooklyn Gorilla (1952), the Bowery Boys film Jalopy (1953), the Bowery Boys film Paris Playboys (1954), the Bowery Boys film Up in Smoke (1957), the notorious Z-budget films Billy the Kid Versus Dracula (1966) and Jesse James Meets Frankenstein’s Daughter (1966), and The Green Hornet (1974), a compilation of episodes of the superhero tv series.