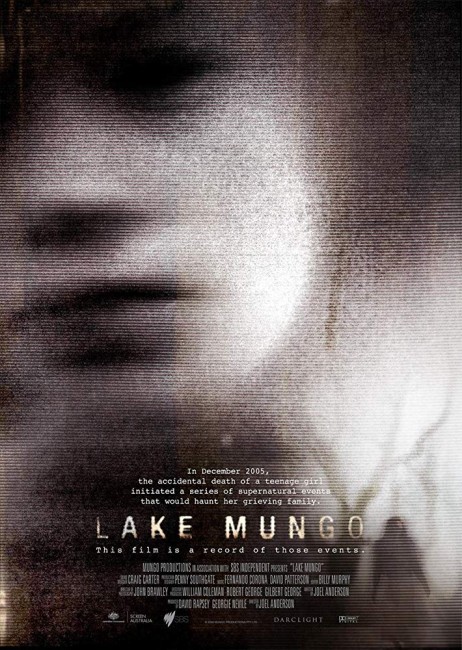 In December 2005 in the town of Ararat, Victoria, the Palmer family is shattered after the teenage daughter Alice goes missing and her body is subsequently recovered having drowned at Lake Mungo. In the aftermath, the mother June becomes certain that Alice’s ghost is haunting the house. A local then takes a photo near the lake that has what appears to be Alice’s figure in the background. The teenage son Mathew places video cameras around the house and records what seems to be Alice’s figure. They bring in radio psychic Ray Kemeny and discover further evidence of Alice’s ghost on cameras they set up. However, as they dig deeper and uncover a series of secrets about Alice, things are not what they appear to be.

Lake Mungo is an interesting Australian entry in the Found Footage genre. It was made just after Oren Peli had made the very similar Paranormal Activity (2007), although was released before Paranormal Activity became a massive hit in theatrical release in 2009.

It is interesting to see a treatment of like material made before the Found Footage cliches set in as a result of Paranormal Activity. Most noticeably, there is a lack of the continuous camera viewpoint a la the security cameras in Paranormal Activity or the handheld video cameras in the midst of action used by other Found Footage films. Here the film harkens back to the earlier mockumentary form and intersperses its video footage with mock interviews with the family members and other witnesses.

Lake Mungo is interesting, although it is somewhat disappointing seeing it after watching much of the body of post-Paranormal Activity films and sequels. The film generates some okay spooky atmosphere with the appearances of spectral figures within the photographs and video images. The director and actors do an excellent job in portraying a group of everyday characters and capturing their perfectly normal reactions.

However, just when we think we are watching a Found Footage ghost story, the plot takes a series of strange doglegs that keep turning everything on its head. It becomes fascinating when we get to the first revelation about what is going on where [PLOT SPOILERS] what we think has been a ghost story for some part of the way in is revealed as the son (Martin Sharpe) having (somewhat improbably) faked things. This becomes decidedly interesting, however the film keeps putting spins on the set-up – the discovery of the neighbour recorded on the videotape and of the dead daughter’s secret life in sex tapes; the prior connection with the psychic; the revelation about the buried cellphone and the discovery of what she recorded on it.

[PLOT SPOILERS CONTINUE] Each twist becomes so successively improbable that by the end you are having difficulty believing the film – when it comes to the revelation of real haunted images within the faked haunted images on the videotape and photos, you become unsure whether you are meant to be taking the twists seriously or whether the filmmakers are trying to pull your leg. The film does arrive at a supernatural ending that ties the two hypnotism sessions together with haunting effect.