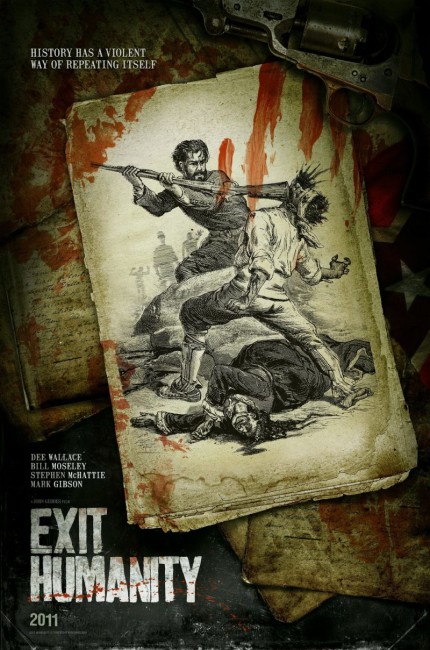 Malcolm Young reads the journal written by his ancestor Edward Young in Tennessee in 1865. Edward writes of the scourge of the walking dead that started to move across the countryside, devouring the flesh of the living. Edward returned from fighting in the Civil War to find that his wife had become one of the dead. He buried his son but was forced to place a bullet in his son’s head when the corpse came back to life. Numbed by the horror of this, Edward walked across the countryside. He fell into the company of Isaac who persuaded Edward to join him in rescuing back his sister Emma from the militia of General Williams. During the course of this, they discovered that Emma had a natural immunity to zombie infection. However, the rescue also brought Williams and his army against them, seeking revenge.

The zombie film has become legion during the late half of the 00s following successes that have revived the genre such as Resident Evil (2002), 28 Days Later (2002), Dawn of the Dead (2004) and Shaun of the Dead (2004). Most of these have been low-budget and gore-drenched or increasingly more commonly involve a gonzo title concept or plant tongue in cheek and play with a wacky sense of humour. Almost every conceptual collusion imaginable has been offered up – either straight or in parody form – during this fad. See Zombie Films.

The Civil War zombie film is not a new idea. We have had Civil War zombies resurrected in the present-day before with The Supernaturals (1986) and The Curse of the Cannibal Confederates (1982), the latter being possibly the worst zombie ever made. The only one of these to ever actually be set during the Civil War (as opposed to showing Civil War dead being resurrected in the present-day) was George Hickenlooper’s modestly effective The Killing Box/Ghost Brigade (1993).

John Geddes approaches Exit Humanity as a serious zombie film (something that has become an increasingly dying breed). He immediately gives the film something that makes it different to most of the other gore-drenched zombie films. (Not that Exit Humanity stints in this department either). The film is construed as far more of an internalised work about one man’s desolation and emptiness and the journey of the soul he gradually undergoes rather than it is ever a work about someone at siege from the dead.

What we have feels less like a zombie film than something akin to what I Am Legend (2007) should have been or The Quiet Earth (1985) was – a study in a man’s progressive isolation and madness in the face of the apocalyptic. This is also one zombie film that goes back to the genre’s origins in voodoo and gives an origin story about Dee Wallace using spells to resurrect her unjustly condemned and executed sister.

The film is clearly operating on a low budget but musters sufficient resources to bring in mildly well-known names such as Bill Moseley and Dee Wallace, as well as Brian Cox as narrator and the fine Canadian actor Stephen McHattie as a doctor. Bill Moseley and Dee Wallace in particular give fine and understated performances, while the unknown Mark Gibson holds up perfectly capably in the lead role.

A scrupulous effort has been made to obtain a convincing period setting to such extent that the film gives thanks to the contributions from no less than eight Civil War re-enactment groups from four different US states. The only thing that one felt did not work was the use of animation in lieu of several of the zombie despatches and action scenes – it seems to jar with the well established internal mood, not to mention signals that the film is too cheap to afford proper makeup effects.