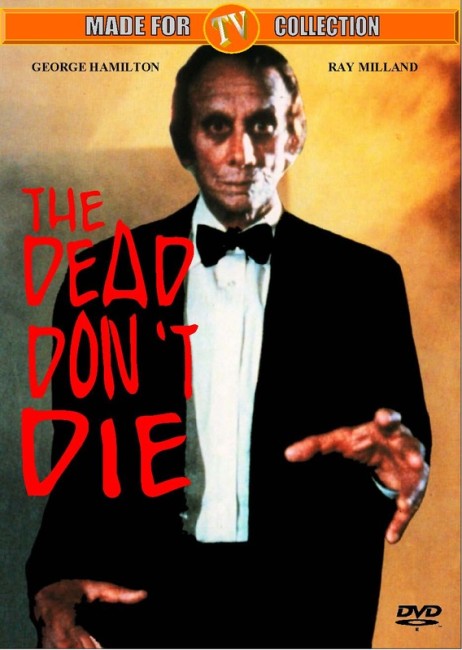 In 1934, naval officer Donald Drake visits his brother Ralph who is about to be executed. Ralph insists that he did not murder his wife Frances but no evidence has been found to exonerate him. Before he goes to the electric chair, Ralph gives Don a letter. A few years later, Don follows the letter to Chicago to collect Ralph’s earnings from Jim Moss who runs a series of dance marathon competitions. Don’s investigation into what happened to Ralph throws him into a series of mysteries where he encounters people that are dead one moment and not the next. Behind all of this is the mysterious Verek who has the ability to raise the dead with voodoo and control them to do his bidding.

The Dead Don’t Die – not to be confused with the subsequent Jim Jarmusch zombie comedy The Dead Don’t Die (2019) – is a largely forgotten tv movie. It did attract some names that make for fascinating watching. These include director Curtis Harrington who made a series of psycho-thrillers throughout the late 60s/early 70s beginning with Games (1967) that often featured former name actresses who had fallen beyond their peak years (see below for Curtis Harrington’s other films); an original script from Robert Bloch, the author of the novel upon which Psycho (1960) was based (see below for Robert Bloch’s other works); playboy/actor George Hamilton in the lead role; horror regular Ray Milland in support. Curtis Harrington also does his thing and resurrects famous actresses of yore, including Joan Blondell who has been a starlet of the 1930s and had appeared alongside James Cagney in The Public Enemy (1931), as the woman who runs Reggie Nalder’s shop, and Yvette Vickers of Attack of the 50 Foot Woman (1958) and Attack of the Giant Leeches (1959) fame in a small role as an applicant for one of Ray Milland’s dances.

The combination of Robert Bloch on script and Curtis Harrington’s love for filmic yesteryear merges in fascinating ways. Bloch gives us all the film noir tropes – the man in a fedora on a mission to find the truth, the femme fatale, mysterious dead bodies, the uncovering of a conspiracy among the powers of the city. In this case, the conspiracy uncovered turns out to be one involving a powerful voodoo figure – although you are left uncertain if Verek is a mortal sorcerer or else one of the loa of voodoo. The film does feature substantial use of zombies, although these are very different from the stumbling flesh-eating zombies of George Romero and are fully cognisant figures able to pass for the living but for the fact they have been resurrected from the dead and their actions are being controlled.

The film creates a weirdly creepy atmosphere. We have scenes in which people are killed in front of George Hamilton and then turn up alive again later, and of corpses climbing up out of the coffin after him. Or of femme fatales luring George Hamilton to them and then revealing they are dead. Curtis Harrington is operating with a limited budget and this cuts off what could have been a much better film. As it, given a better budget and more opportunity to open up, you suspect that The Dead Don’t Die had the potential to be something akin to another Angel Heart (1987).