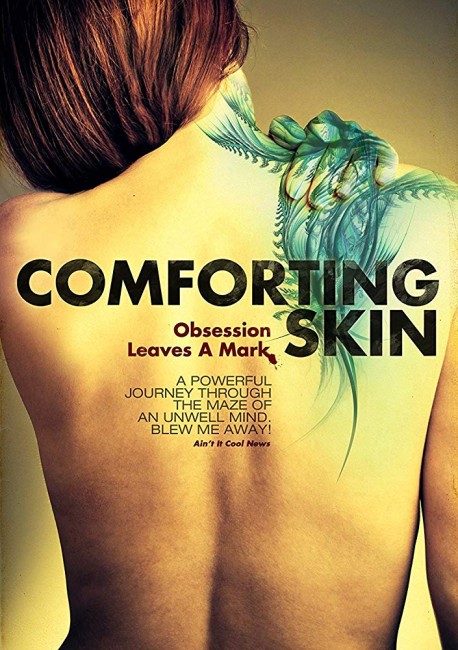 Koffee feels unhappy with her mixed-up life, where no guy ever seems to want her and her past mental history is off-putting to others. On inspiration one evening, she gets a tattoo on her right shoulder blade. She becomes enchanted with the tattoo but is then disturbed when it appears to start talking to her and moving around her body. As it does so, the tattoo turns Koffee on to the point of orgasm. She realises that she has finally found someone that loves her. However, while this gives her a newfound confidence, her relationship with the tattoo takes her down into dark and obsessive places.

Comforting Skin was a debut feature for Canadian Derek Franson, previously a director of commercials and music videos. Much of Franson’s work has involved visual effects and animation. It is the only feature film he has made to date,

The idea of the tattoo that gains a life of its own is one that has played out in several other films. In comic-book based films such as Ninja Scroll (1993) and Elektra (2005), characters being able to bring their tattoos to life is treated as a superpower, while the heroine in The Rage: Carrie 2 (1999) is able to make her tattoos move when she uses her psychic powers. There have been a number of films dealing with the dark fascination surrounding tattoos such as the erotic psycho-thriller Tattoo (1981), the German Tattoo (2002) about the killing of people for their tattoos and Perfect Skin (2018) where a woman is imprisoned and her skin used as a canvas by a tattoo artist. There was also the uniqueness of the narrative frame in The Illustrated Man (1969) where Rod Steiger’s tattoos come to life to tell stories.

Comforting Skin lies more in the company of works that use the idea for horror purposes such as the New Zealand film The Tattooist (2007) where a character gets a tattoo that starts to infect and kill others and, closest to this, The X Files episode Never Again (1997), which had Rodney Rowland possessed and driven to kill by a tattoo of Betty Boop (voiced by none other than Jodie Foster).

Comforting Skin has an undeniable familiarity to its set-up coming after one has seen The Tattooist and Never Again. Nevertheless, Derek Franson manages to give the film a number of spins that make it sufficiently interesting. One of these is to play the tattoo’s existence as something that could well be subjective and merely taking place inside the imagination of a mentally ill girl to turn Comforting Skin into a Repulsion (1965) of sorts – again, not dissimilar to Never Again.

There are times that Comforting Skin teeters between risibility and conviction – some of the lines that Victoria Bidewell gets like where she announces that she is in love with her tattoo and it is the perfect lover have a certain silliness to them. One scene where she writhes around her bed as the tattoo moves all over her naked body making love to her starts in with a similar kind of silliness but eventually comes out with a fascinated conviction. It is in these scenes that Comforting Skin starts to discover itself.

The performances also give a great deal of life to the film. Victoria Bidewell is extremely convincing as a girl who looks so frumpy and ordinary that you can believe her when she feels that nobody wants her – she looks the part, not like a glamorous actress pretending to dress down where her self-realisation amounts to no more than taking a pair of glasses off. She gives an enormous conviction to Koffee’s transformation and mental fracturing. There are some marvellous scenes with her attraction to Tygh Runyan, her falling to pieces and an especially side-splitting scene where the tattoo starts turning her on while she is in an elevator. Tygh Runyan plays equally well opposite her with a seemingly natural ability at improvising wittily off-the-cuff dialogue.