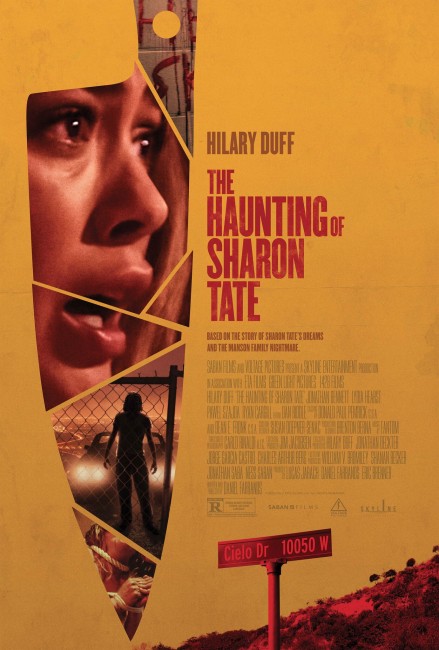 August 6, 1969. Actress Sharon Tate returns to the Hollywood home she shares with her husband, director Roman Polanski. He is presently away in London and Sharon is eight months pregnant. Friends Abigail Folger and Wojciech Frykowski have been staying in the house but Sharon is not happy with the way they have rearranged things. She is disturbed by strange people knocking at the door asking for the previous owner and finding numerous packages containing music tapes sent by someone named Charlie. She is especially unsettled when the tape machine starts spontaneously playing the tapes at night and to find that they are recorded with backmasked messages. Amidst this, she has disturbing dreams about how all of them are going to be killed.

Sharon Tate (1943-69) is a tragic figure. Tate was an actress on the rise in the late 1960s. She only appeared in a handful of films – Don’t Make Waves (1967), Eye of the Devil (1967), The Fearless Vampire Killers (1967), Valley of the Dolls (1967), The Wrecking Crew (1969) and the posthumously released The Thirteen Chairs (1969). On the set of Fearless Vampire Killers, she became involved with director/her co-star Roman Polanski and the two subsequently married. Tate was eight months pregnant to Polanski with her first child. On August 9, 1969, she, along with Jay Sebring, Polanski’s friend Wojciech Frykowski and his girlfriend Abigail Folger were at home in Tate and Polanski’s home at 10050 Cielo Drive in the Hollywood Hills when four members of Charles Manson’s Family broke in and variously shot, stabbed and hung the people in the house. Tate was stabbed sixteen times. Along with the subsequent murder at the home of grocery store owner Lino La Bianca and his wife, Manson and several followers were sentenced to life imprisonment.

The Haunting of Sharon Tate comes from Daniel Farrands who has a reasonable genre history. One of his first jobs was the screenplay for Halloween: The Curse of Michael Myers (1995) and he was written the scripts for other horror films such as The Tooth Fairy (2006), The Girl Next Door (2007) and Havenhurst (2016), as well as produced The Id (2015) and Amityville: The Awakening (2017). Farrands directed and wrote several episodes of the History Channel series History’s Mysteries (1998-2011) dealing with the supposed Amityville hauntings. Throughout the 2000s, Farrands has directed a number of documentaries about horror films with His Name Was Jason: 30 Years of Friday the 13th (2009), The Crystal Lake Massacres Revisited (2009), Never Sleep Again: The Elm Street Legacy (2010), Scream: The Inside Story (2011) and Crystal Lake Memories: The Complete History of Friday the 13th (2013). Farrands began directing films based on true crimes with The Amityville Murders (2018) about the Ronald DeFeo killings that preceded the Amityville Horror story and is next due to return to true crime with The Murder of Nicole Brown Simpson (2019).

The Haunting of Sharon Tate comes out on the fiftieth anniversary of the Manson killings, a period that also saw several other Manson films with Charlie Says (2018) featuring Matt Smith as Manson, The Last of the Manson Girls (2018), the cheap The Manson Family Massacre (2019) and Quentin Tarantino’s Once Upon a Time in Hollywood (2019), while Manson also made an appearance in an episode of Mindhunter (2017- ). It was condemned as exploitative by Tate’s family members before it even opened. Not that that precludes the possibility of it being an interesting film. One expected something along the lines of one of The Asylum’s films such as Gacy House (2010) and 100 Ghost Street: The Return of Richard Speck (2012), which try to convince us they are taking place in the modern day equivalent of famous crime scenes.

Farrands’ screenplay touches base with most of the details of the Sharon Tate case. All of the principal players are there. The one missing from the equation is the still-alive Roman Polanski whose name is dropped several times and we see in a brief video clip from his and Tate’s wedding. There are the visits from Manson’s people (and a Manson lookalike who is kept in the shadows) looking for record producer Terry Melcher, the former owner of the home who Manson believed would help him break into the music industry. Quite whether Manson sent dozens of tapes his own music to the house – some of his music has actually been recorded for the film – I unable to ascertain. The film however does get into a very leery position when it claims that Manson’s music had also been recorded with backmasked Satanic messages.

On the other hand, there is rather dubious aspect of the title. This is erroneous – the film should more accurately have been called The Precognitive Dream of Sharon Tate and does not concern any haunting in the traditional sense ie. features any ghosts. It is misleading in that it expects you to believe one type of film and delivers a different one altogether. The clairvoyant dreams have a scanty basis in fact. Tate supposedly mentioned that she had had a dream of something bad happening in an interview some time earlier and Farrands has expanded on this to have her plagued by a series of dreams that predict the murders in full detail on the days leading up to August 9th.

The most bizarre sections of the film come during the latter third. Here we see Sharon and the people in the house fighting off and killing the members of The Family. One is wondering WTF is going on before comes the realisation that this is Sharon having another of her dreams. Unfortunately, Daniel Farrands’ direction is tepid and uninspired and neither the restagings of the crime nor the fight back seem anything other than by-the-numbers home invasion thriller sequences when what they should have been is a series of raw, brutal sequences that left us shocked. Things become even more bizarre as the film ends on a deathdream with Hilary Duff’s Sharon exiting the house to join the others and it left uncertain whether the bodies in the driveway are theirs or the members of the Family they killed, all with some banal voiceover narration about whether events in life are fated or we can change the course of them. (Oddly enough the other major Manson film to come out during this period Charles Says, also ends with fantasy of alternate outcomes)