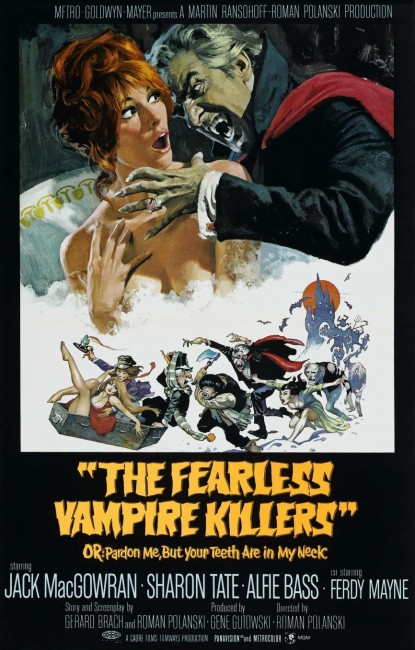 aka Dance of the Vampires; The Fearless Vampire Killers or Pardon Me But Your Teeth Are in My Neck

The vampire hunter Professor Abronsius and his bumbling assistant Alfred arrive in a small village in search of vampires. Alfred falls for the innkeeper’s beautiful daughter Sarah but she is snatched by a vampire. Alfred and the professor head to the nearby castle in search of Sarah where they welcomed by the urbane Count Von Krolock and his son Herbert who develops an interest in Alfred.

The Fearless Vampire Killers is the one weak link in the otherwise considerable brilliance of Roman Polanski’s genre oeuvre. Polanski has produced some great classics, including Repulsion (1965), Cul de Sac (1966), Rosemary’s Baby (1968), MacBeth (1971), Chinatown (1974), Tess (1980) and especially his below-listed genre works. Polanski’s output from the 1980s onwards has been more variable – although he has made a number of fine films during this time including Death and the Maiden (1994), The Pianist (2002), Oliver Twist (2005) and Carnage (2012).

If the truth be told, the film could have been cut even further. Even the cut version feels long and padded and one has doubts that Polanski’s full-length version would make it a better film. Roman Polanski is far too meticulous a director to work in the genre of knockabout slapstick that the film aims for. The film seems to consist mostly of clonks over the head, stumblings, inane gibberings, kicks in the ass, or in having the vampire hunters stake barrels of wine or tripping over coffin lids by accident. The middle of the film is taken up by at least a half-hour of running around the castle that seems to go on forever. It leaves one with sympathies with the distributor’s decision to cut the film. The Fearless Vampire Killers has a body of supporters but mostly it seems a work whose virtues are argued in isolated pieces rather than as a whole.

Certainly, there are one or two moments of imagination in the unenlivening silliness – the scene where the dance wheels around in front of a mirror and the three live people are the only ones reflected. The film is better when it comes to its puncturing of the cliches of the vampire genre, in particular the ones created by Hammer Films – the masque is a direct spoof of Kiss of the Vampire (1962), for instance.

This film’s Van Helsing equivalent (an amusing hopped-up performance from Jack MacGowran) is seen as a bumbling idiot who, far from succeeding, instead ends up transporting vampirism to the rest of the world. Or the handsome blonde vampire of the piece, modelled after David Peel in Hammer’s The Brides of Dracula (1960), who has more of an interest in the hero than the heroine.

The production values for the film are excellent – rather than the painted backdrop that would stand in for the standard Hammer castle, the castle is built with impressive three-dimensional detail over an entire soundstage. There is also a fine score from Polish composer Christopher (Krzysztof) Komeda.

The other thing the film is noted for is Polanski’s becoming involved with his leading lady and co-star Sharon Tate. The two subsequently married and were expecting a child before Tate was murdered by members of Charles Manson’s family in August 1969.

Roman Polanski’s other films of genre interest are:– Repulsion (1965), a subjective film set inside the paranoid fantasy of a woman whose sanity was crumbling; the classic and highly influential Satanic impregnation film Rosemary’s Baby (1968); the paranoid identity exchange drama The Tenant (1976); and the occult film The Ninth Gate (1999).