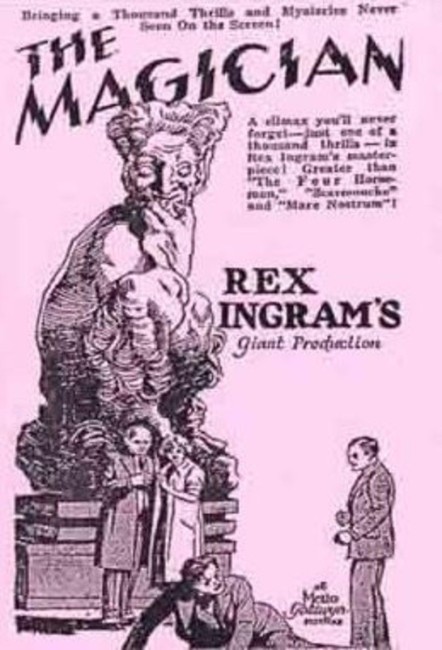 In Paris, artist Margaret Dauncey is critically injured when a statue falls on top of her. Her life is saved by surgeon Arthur Burdon. The operation is viewed by the magician Oliver Haddo who needs the blood of a maiden to complete an occult spell. Afterwards, Margaret and Arthur strike up a romance and announce their engagement. However, Haddo has developed an obsession with Margaret and hypnotises her. Haddo steals her away to Monte Carlo, announcing to Arthur that they have married. Arthur instead traces them to Haddo’s laboratory in the tiny village of LaTourette and determines to rescue Margaret from Haddo’s clutches.

W. Somerset Maugham (1874-1965) was one of the most celebrated novelists and playwrights of his era, producing works such as Of Human Bondage (1915), The Moon and Sixpence (1919) and The Razor’s Edge (1944), among others. These have undergone multiple film adaptations, although none of the others enter into genre territory. Maugham wrote the novel The Magician (1908) loosely based on the life of Aleister Crowley. (Crowley later wrote a damning review of the book, accusing Maugham of plagiarism from other occult works).

Aleister Crowley (1875-1947) is a fascinating figure in British 20th Century culture. Raised in a Plymouth Brethren family, Crowley rebelled and strayed into drug-taking and sexual experimentation. He eventually became notorious for his libertine lifestyle and was called ‘the wickedest man in England.’ Crowley developed a fascination with magic and the occult (although was not, as he is commonly misidentified, ever a practicing Satanist). On a visit to Egypt in 1904, Crowley claimed that he had been contacted by a spirit named Aiwass who provided him with the text of a book he published as The Book of the Law (1904). This became the basis of a religion that Crowley named Thelema, which laid down a series of rituals and a code of morality – the most common phrase that everyone remembers was the precept “Do what thou want shall be the whole of the law.” Crowley has also been depicted on screen before in episodes of the tv series Strange Angel (2018-9) and as reincarnated in the film Chemical Wedding (2008).

The film version of Maugham’s The Magician was made by director Rex Ingram (1892-1950). Ingram was born in Ireland but emigrated to the USA in the 1910s. He began directing with The Symphony of Souls (1914) and made a number of classic works of the silent era including The Four Horsemen of the Apocalypse (1921), The Conquering Power (1922), The Prisoner of Zenda (1922), Scaramouche (1923) and The Garden of Allah (1927). Ingram had earlier married Alice Terry who plays the innocent heroine in the film. During the 1920s, Ingram left Hollywood and set up a studio in Nice, France (where The Magician was filmed). Ingram is often confused with the Caribbean-born actor Rex Ingram who was also active in this same era (the IMDB listing for the director of The Magician, for instance, linked to actor Ingram rather than the director).

The Magician was considered lost for many years until a version showed up in the 1990s and was released to dvd in 2011. I had read about the film in works like Carlos Clarens’ Horror Movies: An Illustrated Survey (1967) and especially William K. Everson’s Classics of the Horror Film (1974). These had elevated the film to the status of a classic even though both authors were writing at a time when audiences were unable to view any copies of the film. They praised taboo qualities like the drug hallucinations, the occult theme and ravishment of the heroine. This has led The Magician to be regarded in the minds of many cinephiles and especially genre fans (like this author) as a lost masterpiece. The upshot of such was that when one eventually comes around the watching The Magician in 2020, it seems a pale shadow of the work that people had built it up into being. It is not uninteresting – but for reasons that are quite different to the ones that gained it a reputation.

Rex Ingram creates an interesting atmosphere. There is the location in what the title card announces as the ‘Latin Quarter’ of Paris, which must have had the suggestion of something very bohemian back in its day. In an artist’s studio there, Alice Terry and Gladys Harner work on their mutual artworks. Alice’s is a giant statue some twelve feet tall that resembles the deity Baphomet, while Gladys struggles to perfect a modernist sketch of the canal. As they work, the statue appears to come to life before it falls on top of Terry. This is followed by the operation scenes that take place in a room with a viewing balcony all around from where the bullish figure of Paul Wegener’s Haddo sets his glare upon Alice Terry.

This is all promising and directed with some visual command that sets the stage well. Thereafter though, the film falls into being a standard drama of the silent era. There is a very by-the-book romance between Alice Terry and Ivan Petrovich, while Paul Wegener glowers from the sidelines like a typical villain of the era. Certainly in being cast with Paul Wegener, a German actor who came to fame in The Golem (1914) and later co-directed/starred in its sequel The Golem (1920), the role has a great deal of presence. Wegener has a big build and physically dominates scenes. He doesn’t need to engage in any cliched movie villainy, he simply commands the film with his bulk and demeanour of haughty superiority.

The sets are amazing particularly during the climactic scenes. Haddo conducts his ceremony on a clifftop laboratory tower. There is an amazingly lit series of stairs that ascend the interior of the tower at a steep gradient. Inside the laboratory, the bowl of a giant alchemist’s alembic sits in the forefront of the frame. Haddo is also accompanied by a dwarf lab assistant – this must be the very first example of the mad scientist in his architecturally distorted laboratory with a physically deformed assistant. Much of what appears here would seem to have influenced James Whale when it came to Frankenstein (1931) five years later,

Of the abovelisted horror purveyors, one must also remember that Clarens was writing in 1967 when Rosemary’s Baby (1968) and The Exorcist (1973) hadn’t been released. Everson was writing a few years later and includes a single photo mention of the latter film but focuses on films of the 1930s and 40s – you get the impression that he hadn’t seen much of the 70s occult cycle and was only including a brief overview of contemporary works for the sake of inclusiveness. The whole shock value and Satanic orgies that came after Rosemary’s Baby and The Exorcist either weren’t around or hadn’t made their impact felt at the time either writer was writing. Thus the relatively tame and slightly suggestive scene that we do get must have seemed far more than audiences raised on 1930s-40s films were used to.

Even aside from that, the film is based in notions of women that are to say the least quaintly old-fashioned. The first of these is the notion of sexual innocence as something highly prized that belongs to the rightful person like a husband to whom a virgin bride is prized above all else. Like Dracula, Oliver Haddo is represents a carnal influence – he is a seducer, a plunderer of virtue who tempts with what is clearly identified as sexuality. (Yet for all his being associated with carnality, Haddo seems to have no real interest in having his way with Alice himself, rather his interest only appears to be for the occult ceremony he is preparing).