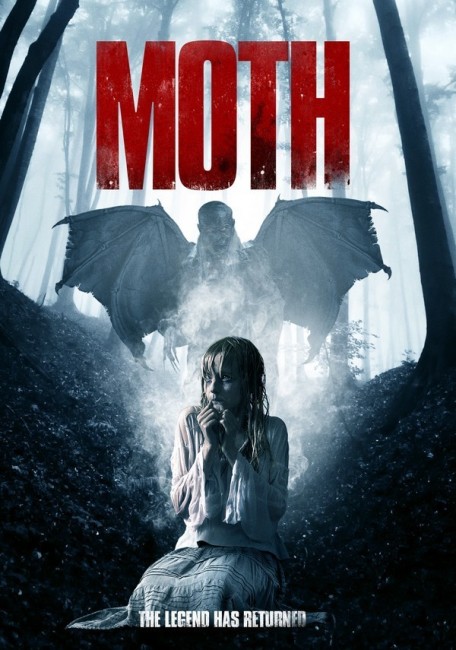 In London, Thora Nichols, an expatriate Ukrainian lecturer on world mythology, announces that she is going on an expedition to Hungary in search of reports of the Mothman. She asks for volunteers to accompany her and Adam Larsson, an expat Swedish student, signs on. The two travel into the Hungarian countryside, filming everything along the way. They become lost in their directions and end up at an old abandoned building. There however the car disappears and they find the woods filled with dead bodies.

Moth is a Found Footage film from a duo of Hungarian filmmakers Georgo Elekes and Joszef Gallai. The two have made several films together with Quiet Change (2012), Interview (2013), Bodom (2014) and with Gallai solo directing A Guidebook to Killing Your Ex (2016) with all but the first existing in the horror/psycho genres. Jozsef Gallai also plays the Adam, the Swedish student who is one half of the duo at the centre of the film here.

Moth is a Found Footage film (in all but the opening scenes). The title seems to refer to the Mothman of The Mothman Prophecies (2002) fame, although in truth there is only a very brief mention about the Mothman in the first few scenes (where its significance is never made very clear) and thereafter it is forgotten about. Indeed, one of the criticisms you can make of the film is that the duo set off on a standard expedition into the woods where it is never at all clearly sketched out what it is they are trying to find/document.

The film soon falls into the Found Footage genre cliches. The plot follows all the tropes of The Blair Witch Project (1999) – people on an expedition in search of rumours of something supernatural get lost in the woods, encounter mysterious happenings and something that appears to be screwing with them. It is all familiar stuff except for the fact that it is very tediously played out – nearly the first half of the film consists of a long car journey in which nothing at all happens. And once the couple do get lost, the assorted Blair Witch copyings are not terribly interesting either.

The one moment of interest is the ending [PLOT SPOILERS] where everything is thrown on its head and it revealed there is no haunting, that it is all a set-up to make a film where the plans then proceeds to go awry.