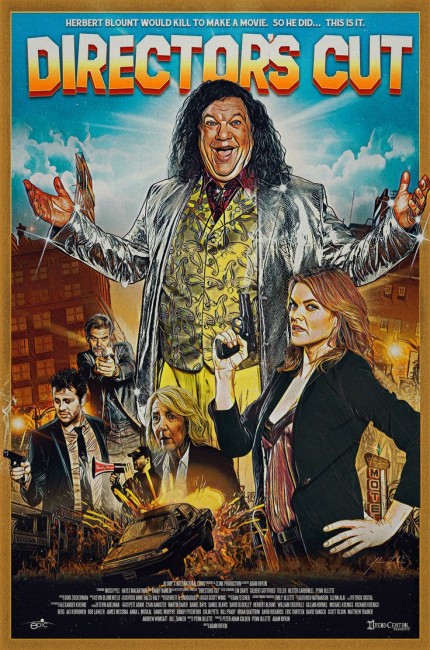 Actress Missi Pyle is appearing in the crime thriller Knocked Off where she plays an FBI agent aiding police detective Godfrey Winters (played by Harry Hamlin) and his partner in their efforts to catch a serial killer who is recreating the set-ups of famous killers. Herbert Blount is a huge fan of Missi and has purchased a position on the film as part of a crowdfunding package. He is determined to shoot his own film where Missi is the real star. To this extent, he follows Missi, places hidden cameras in her hotel room and obtains a rough cut of the film and starts to edit his footage into it. He then abducts and imprisons Missi so that he can shoot insert scenes for the film in which he is the hero.

Penn Jillette is best known as one half of the celebrity magician act Penn & Teller – he’s the tall one who talks. The duo first appeared together in 1975, became a celebrity magic duo in Las Vegas and have since have spread their fame into various media incarnations with Penn and sometimes Teller making acting appearances on a number of tv shows ranging from Babylon 5 (1992-8), Sabrina the Teenage Witch (1996-2000) and Black Mirror (2011- ) and in films from Fantasia 2000 (1999) to Sharknado 3! Oh Hell No (2015). Their most famous televised venture was the show Penn & Teller: Bullshit! (2003-10) where they debunked popular beliefs and misconceptions. Penn has developed a number of other projects, including writing several books, but Director’s Cut was his first original screenplay.

It rapidly becomes apparently soon in that Director’s Cut is a work of Meta-Fiction. The film opens with a series of regular credits but over the top of these come Penn Jillette’s voiceover tossing off disparaging comments about various of the cast and crew, citing random pieces of trivia and where we see that names have been crossed out and his inserted in their place. As the actual film starts, we appear to be in the midst of a regular Serial Killer Thriller as detectives Harry Hamlin and Hayes MacArthur are joined by FBI agent Missi Pyle to track someone responsible for a series of killings that seem to be homaging famous murder scenes.

The effect is initially a bewildering one. As we watch what on the face of it seems to be a regular Police Procedural, Penn’s voiceover constantly intrudes pointing out pieces of information like product placements in a scene, gaffes and errors, cynically deflating the real world improbabilities of such happening, or pointing out the crowdfunders appearing as extras in a scene. Not to mention where the camera pulls back to show behind-the-scenes footage (all with Penn Jillette inserting himself on the set as a crowdfunder shooting a video and stalking Missi) and even outtakes. Or else scenes where Penn’s character has edited in camcorder footage and even footage from a camera hidden in Missi’s hotel room to tell an entirely different narrative to the one going on in the detective story.

This gets positively manic during the latter half when Penn Jillette kidnaps Missi Pyle and insists on editing himself into the film in some deliberately crappy homemade digital inserts. These include scenes where we have car crashes shot with toy cars or a city establishing shot taken from a video library that still has the watermark on it. These scenes vie with footage where the police investigate and Harry Hamlin playing himself is called in to be questioned, only for his real-life wife Lisa Rinna to turn up along with a film crew from her real-life reality tv show The Real Housewives of Beverly Hills (2010- ).

There is also a good deal of playful nerdiness to Jillette’s script – comparing shots to Orson Welles’ Touch of Evil (1958), talking about director/musician combos like John Carpenter and Clint Eastwood, the pointlessness of the Total Recall (1990) remake Total Recall (2012), mentioning the lameness of the Lost (2004-10) finale when Nestor Carbonell’s name comes up (even though Carbonell only briefly turns up in a single scene – the end credits also include a number of other actors who have clearly been cut from the finished film).

It all gets a little silly towards the end and in danger of wearing out its principal gag, nevertheless it winds up effectively and well. The last few minutes of the film consist of Penn Jillette and his band the No God Band singing a song about Jeffrey Dahmer.

Director Adam Rifkin first appeared with a couple of minor comedies, directed the trashy The Invisible Maniac (1990) under a pseudonym and then made the very strange, almost culty The Dark Backward (1991) under his own name. Rifkin subsequently went onto make a variety of mainly comedies, as well as the odd genre item like Psycho Cop Returns (1993), Homo Erectus (2007) and the Wadzilla segment of Chillerama (2011). His most notable directorial works was the modestly successful Detroit Rock City (1999). He has also made the bizarrely funny mockumentary Welcome to Hollywood (1998) in which he tries to turn an unknown actor into a star and an even stranger documentary Giuseppe Makes a Movie (2014) about an underground filmmaker and Burt Reynold’s last film The Last Movie Star (2017). Rifkin’s greatest successes however are as a screenwriter with Mousehunt (1997), Small Soldiers (1998), Zoom: Academy for Superheroes (2006), Underdog (2007) and Knucklehead (2010), while he has also produced Willy’s Wonderland (2021).

(Nominee for Best Original Screenplay at this site’s Best of 2016 Awards).