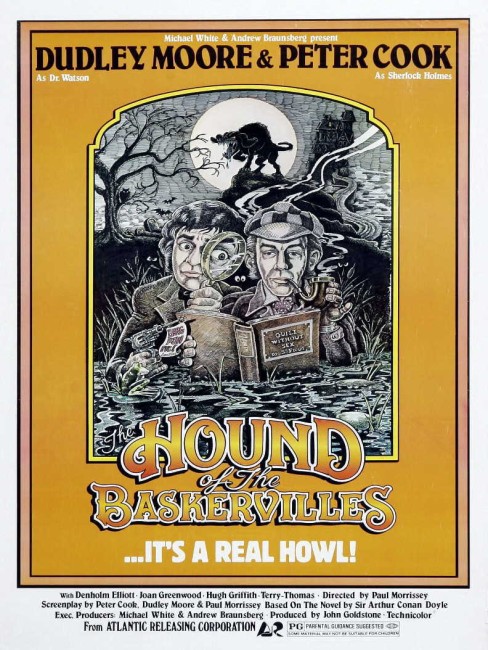 Sherlock Holmes is approached by Dr Mortimer who wishes to procure his services to protect Sir Henry Baskerville. Following the death of Sir Charles Baskerville, Sir Henry is now heir of the Baskerville estate. The Baskerville line is supposed to be cursed by a fearsome supernatural hound that appears to kill all members of the family and Mortimer believes that the hound killed Sir Charles. Holmes considers the case beneath him and sends Dr Watson to accompany Sir Henry to the decaying Baskerville estate on the moors while he takes a health cure. There Watson comes to believe sinister activities are indeed afoot.

This is an adaptation of Arthur Conan Doyle’s novel-length Sherlock Holmes mystery The Hound of the Baskervilles (1902) – around the fifteenth version of the story by this author’s estimation. (See bottom of the page for other adaptations of The Hound of the Baskervilles). The oddity about this version is that it is a comedy treatment. It was made as a vehicle for British comedy duo Peter Cook and Dudley Moore who adapted the script themselves. This version is largely forgotten – it did zero business at the box-office when it came out, attracted only terrible reviews and has never been rediscovered and championed by British comedy fans as many other works from the era have been.

Peter Cook and Dudley Moore began working together in stage revue, before appearing on the tv series Not Only … But Also (1965-70), which enjoyed some success although has been lost today. It was here that Cook and Moore created the comic personas of Pete and Dud. The partnership spilled out into several films – The Wrong Box (1966), most famously with Bedazzled (1967), while the two also appear along with an ensemble of British comic talent in The Bed Sitting Room (1969). Their work is charted in Derek and Clive Get the Horn (1979), a documentary of their recording a comedy album together, which pushed the envelope so much that the film was banned in England. The duo parted ways shortly after that with Dudley Moore going onto Hollywood stardom in films like Foul Play (1978), 10 (1979) and Arthur (1980).

The Hound of the Baskervilles came during a decade (the 1970s) where film depictions of Sherlock Holmes were undergoing some rather strange permutations. These included films that delved into Holmes’s character – The Private Life of Sherlock Holmes (1970); meetings with historical figures such as Sigmund Freud in The Seven Per Cent Solution (1976) or solving the Jack the Ripper case in Murder By Decree (1979); original adventures like Sherlock Holmes in New York (1976); and complete oddities like They Might Be Giants (1971) in which George C. Scott imagines he is Holmes. There had were other comic efforts around the same time like the Gene Wilder film The Adventures of Sherlock Holmes’ Smarter Brother (1975) and the modernised oddity The Strange Case of the End of Civilization As We Know It (1977) starring John Cleese.

One of the surprises about the film is that it manages to be surprisingly faithful to the Arthur Conan Doyle novel and follows it on most of the plot points at the same time as twisting most of them towards comedic purpose. The book is unusual in that for a substantial section of it Sherlock Holmes is off stage (in fact under disguise on the moors). Here this is amusingly rewritten to have Peter Cook’s Holmes consider the case to be beneath him and assign Watson to go to the Baskerville estate while he goes for a rest cure. One of the amusements to anyone who has read the book is that the script has various others making all the deductions that the story does but these then being dismissed by Holmes and Watson. This version also widely differs from Conan Doyle’s ending in that the Baskerville will is read where it was discovered that Sir Charles left the entire estate to the hound and that every character in the film is revealed to be engaged in a scheme to get Sir Henry to kill the hound.

The Hound of the Baskervilles is an embarrassing oddity for Pete and Dud. Throughout Dudley Moore maintains a bizarre accent as Dr Watson. On the other hand, Peter Cook plays Sherlock Holmes as a bored aristocratic fop – he minces through the film with a minatory nastiness, pouncing on things at random. (There is a lot of gay/crossdressing humour to the film – aside from Kenneth Williams’ camp performance, Holmes flounces around in a bathrobe and a corset, while a meeting with his mother has Dudley Moore giving a bizarre speech about dressing him as a girl). It is fairly clear that Cook, who was to all accounts having a number of problems with alcohol around the time and was jealous of Moore’s growing Hollywood career, was bored with the role. As in the Arthur Conan Doyle book, Watson is the major character in the film and Holmes more of an offsider. Dudley Moore plays two other roles in the film – as Holmes’s mother who is a medium and a one-legged man who applies for a job as assistant detective, while Moore is also seen playing the piano both before the film starts and at the very end.

Despite Peter Cook and Dudley Moore’s reputations as comics, the humour in the film often comes out as interminable. There is a scene with a one-legged applicant for a job as a runner that just goes on and on in a belaboured way. There is an equally lame sequence that also drags on where Dudley Moore encounters Denholm Elliott on the moors who carries a chihuahua that urinates all over Moore as they stand about having a conversation. There is also an unfunny spoof of The Exorcist (1973) with Joan Geenwood causing the bed to levitate, propelling Dudley Moore in and out of the window, as well as a later dinnertable scene where she projectile vomits over the entire table. It’s all rather tiresome.

The worst performance in the film comes from the perpetually awful Kenneth Williams (of Carry On movies fame) as Sir Henry who plays everything with an excruciating loud campy playing to the gallery delivered through a voice that sounds like nails on a blackboard. There’s quite a number of cameos from various other members of the British comedy fraternity, including Spike Milligan as a policeman on the moors, Penelope Keith as a receptionist at a brothel and Prunella Scales as a woman who has a very silly bit about speaking in code when Dudley Moore visits the post office. There’s an extremely silly wild man performance from Hugh Griffith as Frankland, although the lovely Dana Gillespie does turn up as his daughter.

The Hound of the Baskervilles was directed by former Andy Warhol associate Paul Morrissey who directed a number of Warhol’s films such as Flesh (1968), Lonesome Cowboys (1969), Trash (1970) and Heat (1972), and two gore-drenched horror films with Warhol’s name above the title in Andy Warhol’s Frankenstein (1973) and Andy Warhol’s Dracula (1973).