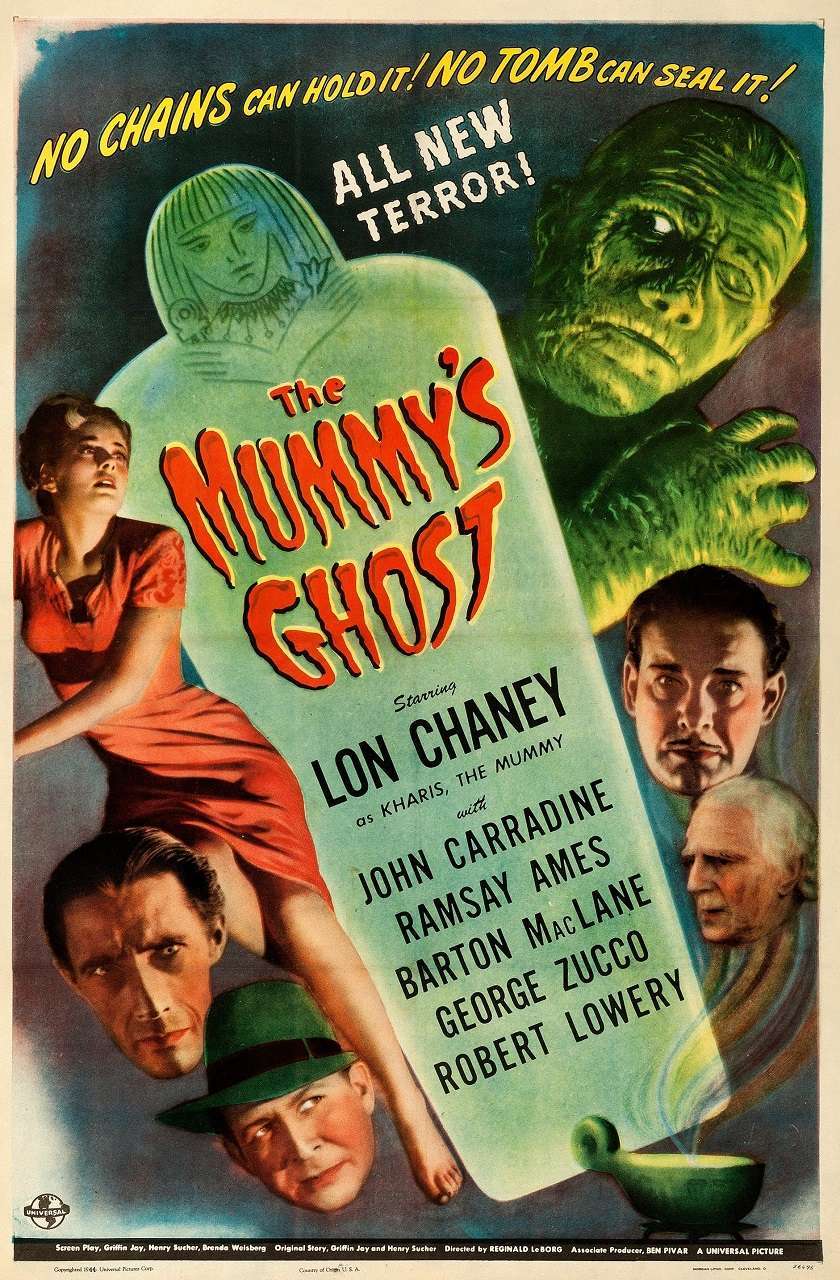 Yousef Bay, an acolyte of the cult of Akran, is sent to the USA to bring back the mummy of Kharis’s beloved Princess Ananka. In Mapleton, Egyptologist Professor Matthew Norman succeeds in reviving Kharis with the burning of tana leaves but is then killed by him. As the police begin a manhunt to stop Kharis, Yousef Bay and Kharis break into the museum and conduct a ceremony to raise Ananka. This causes Ananka’s spirit to inhabit the body of Amina Mansori. They now set out to kidnap Amina and taken her back to Egypt.

The Mummy’s Ghost was the fourth and second to last of Universal’s Mummy films. (See below for other titles). Throughout the 1940s, Universal put all the famous monsters they had created throughout the last decade – Frankenstein’s Monster, Dracula, the Wolf Man, the Invisible Man and the Mummy – through sequels, team-ups and eventually meetings with Abbott and Costello. All of these sequels are routine and formulaic.

By the time of The Mummy’s Ghost, the Mummy series had been reduced to a series of limited plot devices – Egyptian cults, tana leaves, Kharis revived, Princess Ananka’s resurrection/reincarnation, Kharis killing all in his way. The Mummy’s Ghost does nothing except shuffle these around like a well-worn deck of cards. It is routinely handled on all levels. As the high priest, John Carradine has an effectively sinister and swarthy presence. The ending with Kharis and Ananka sinking into the bayou quicksands has a certain tragic sadness to it.

Director Reginald Le Borg was an Austrian immigrant who worked as a B-budget director in Hollywood between the 1920s to the 1970s, mostly being known for a number of the entries in the Joe Palooka series. His other genre films include:- the Inner Sanctum thrillers Calling Dr Death (1944) and Dead Man’s Eyes (1944); the clairvoyance film Destiny (1944); Jungle Woman (1944), the second in Universal’s series starring Acquanetta as a were-ape woman; Weird Woman (1944) about witchcraft in academic circles; the mad scientist film The Black Sleep (1956); Voodoo Island (1957); The Flight That Disappeared (1961), an anti-nuclear film about a planeload of people being abducted in mid-flight; the possession film Diary of a Madman (1963); the psychic thriller The Eyes of Annie Jones (1964); and the psycho-thriller So Evil, My Sister (1974).