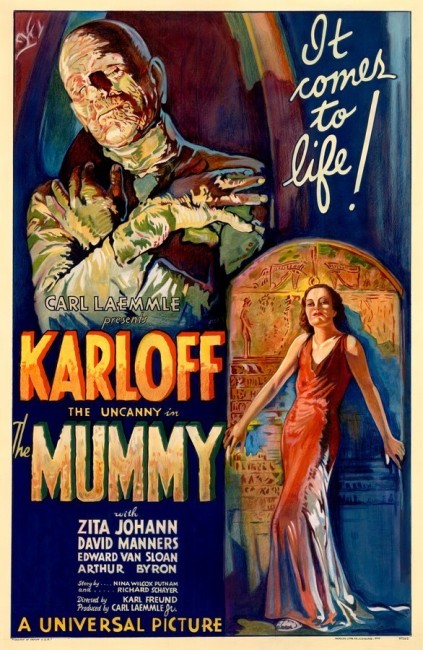 In 1921, a British Museum expedition to Egypt headed by Sir Joseph Whemple uncovers a mummy. They find that it has been buried in non-traditional ways and a curse placed on the casket. On his own, an eager young assistant breaks open the casket but this causes the mummy to awaken. The rest of the expedition return to find that the mummy has vanished and the assistant in a state of catatonic fear. Eleven years later, the British Museum sends another expedition headed by Sir Joseph’s son Frank. They receive a visit from the sinister Ardath Bey who directs them to find the tomb of the Princess Anck-es-en-amon. In actuality, Bey is the reincarnation of the cursed High Priest Im-ho-tep, whose mummy it was that went missing in 1921. Bey sneaks into the Cairo Museum and steals Anck-es-en-amon’s mummy. He then sets out to conduct a ritual that will reincarnate Anck-es-en-amon’s spirit in the body of the British governor’s daughter Helen Grosvenor.

The Mummy is one of the genuine classics from the so-called Golden Age of Horror (which took place principally at Universal Studios between 1931 and 1941). Indeed, The Mummy soon became one of the key figures in the pantheon of Famous Monsters, alongside Dracula, the Frankenstein Monster, The Wolf Man and Dr Jekyll/Mr Hyde.

For all that, The Mummy (the film) is very different from the Mummy that became the cliche figure of Famous Monsters hagiography and even kitset models. The image we usually have of the Mummy is a figure wrapped in bandages, slowly shuffling across the screen like a severe arthritic sufferer. There is little of that in The Mummy. There is a bandage-enwrapped mummy in one scene at the very start but that is all that we see of it. Certainly, during this scene, the work of makeup artist Jack Pierce – who also made up the face of the Boris Karloff’s monster in Universal’s Frankenstein (1931) – in creating the look of the mummy’s face is expert. However, it was not until the various sequels – see bottom of the page – that The Mummy became remembered as the shuffling figure it is today.

The plot seems to be consciously rehashing elements of the Bela Lugosi Dracula (1931) that had been a huge hit the previous year and for which The Mummy‘s director Karl Freund was the cinematographer. The Dracula influence is noticeable in the plot here involving a courtly foreign villain with hypnotic powers, his possession of the heroine’s mind, the image of Isis being used to hold back the mummy instead of a crucifix, and most notably in the casting of David Manners and Edward Van Sloan who filled near-identical roles in Dracula (as Jonathan Harker and Van Helsing respectively). One gets the impression that after the successes of Dracula and the Karloff Frankenstein, Universal were seeking to create more of the same and came up with a thinly disguised version of Dracula that played on the fascination with Egyptian mummies and the stories of a reputed curse after Howard Carter’s party befell mysterious fates (at least according to the popular press) following their opening of the tomb of Tutankhamun in 1922.

While dated in some areas, The Mummy still holds up well today. The surprise to be found here, especially in comparison to the slowly shuffling caricature that the Mummy became in the sequels, is that The Mummy works as a slower and much more psychological film. There is little in the way of shocks and visceral impact. Instead it is a film with an atmosphere of slowly accumulating mood. A constant menace of Egyptian esotericism looms in the background.

Boris Karloff, using the dull, grating tombstone voice that he perfected in the Frankenstein sequels, is at his most cadaverous. Director Karl Freund, a former cinematographer, frames Karloff’s sinisterly glowing eyes in somewhat overwrought closeups, to add a palpable aura of evil. The scene with the mummy slowly opening its eyes at the very start is a classic. One scene with Karloff chanting over the scroll in a flickering, candle-lit museum is genuinely eerie. The scenes with Zita Johann fighting against Karloff’s distant mesmeric influence, using all manner of persuasion in trying to get people to let her out of bed are excellent.

There are the odd minus points. Sometimes Karl Freund lacks interest in scenes and abruptly curtails them. There is a certain silliness at times in the images of Zita Johann parading about in traditional Egyptian head-dress and ridiculous curled bangs or David Manners rambling about falling in love with corpses. There are some odd vagueries to the plot, which cannot decide what type of role it wants Zita Johann to play – throughout she seems to waver between a social sophisticate, a seductive vampishness and the end scenes where she is reduced to a typical 1930s open-tonsilled wallflower in distress.

Director Karl Freund was a cinematographer in his native Germany and fled to the US after the Nazis came to power. In Germany, Freund had worked on classics like Fritz Lang’s The Spiders (1919), The Golem (1920), F.W. Murnau’s The Last Laugh (1924) and Lang’s Metropolis (1927). In the US, Freund had made barely a handful of films as cinematographer, including Dracula, before being snapped up to make his directorial debut with The Mummy. Freund would only go on to make a half-dozen other films – the most notable among these being the demented possessed hands/mad surgeon film Mad Love (1935). He later returned to cinematography, working on American classics such as Camille (1936), The Good Earth (1937), Green Hell (1940), Pride and Prejudice (1940) and A Guy Named Joe (1943).

There were three remakes in Hammer’s The Mummy (1959) with Christopher Lee as the mummy, which essentially wrote its own story unrelated to this; and Stephen Sommers’ The Mummy (1999) with Arnold Vosloo as the mummy, which reconstructs the basics as an adventure film and has the mummy accompanied by an arsenal of CGI effects; and The Mummy (2017) starring Tom Cruise, another adventure film where the mummy is a woman (Sofia Boutella). The Summers film also produced two sequels with The Mummy Returns (2001) and The Mummy: Tomb of the Dragon Emperor (2008).

The Mummy has also made appearances in monster bashes like Mad Monster Party? (1967), Transylvania 6-5000 (1985) and The Monster Squad (1987). One intriguing project was the 60-minute film Kreating Karloff (2006), a mix of documentary and biopic where actor Connor Trimmis restages scenes from Frankenstein and The Mummy with he playing Boris Karloff and takes us behind the making of either film.