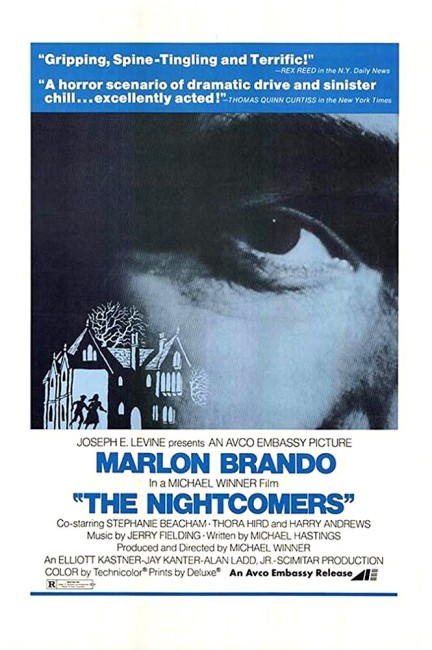 The Master of Blye Estate receives custody of young Miles and Flora Tyrrell after the death of their parents. Disinterested in their care, he places them under the governess Miss Jessel and leaves for London. The children befriend the gardener Peter Quint and witness the sadomasochistic sexual games he engages in with Miss Jessel. Soon though, the children begin to imitate the games they see the adults playing.

Henry James’s oft-filmed The Turn of the Screw (1898) is perhaps the most famous literary ghost story ever written and has been filmed a number of times (see below). The Nightcomers purports to be a prequel to the events that led up to The Turn of the Screw. There is a feeling of pointlessness to the exercise – the entire point of The Turn of the Screw was its very ambiguity about what was happening, whether the children were seeing ghosts or whether these were merely in the imagination of the governess. The Nightcomers takes up the happenings in a horribly literalistic way, one that entirely lacks the psychological ambiguity of the Henry James story.

The Nightcomers is ploddingly dreary and unatmospheric in tone – technically, it is not even a horror story at all. The responsibility for this can largely be placed at the hands of Michael Winner, the director responsible for such aesthetically refined works as Death Wish (1974), Death Wish II (1981), The Sentinel (1977), The Wicked Lady (1983), Scream for Help (1984) and Dirty Weekend (1992). Instead of Henry James’s psychological subtleties, Michael Winner substitutes a lurid fascination. Certainly, some of the sadomasochistic scenes, like where Marlon Brando ties Stephanie Beacham up and starts whipping her with a rope before having sex her and when the children start imitating this are mildly disturbing.

The Nightcomers is noticeably made as a prequel not so much to The Turn of the Screw as it is to The Innocents (1961), which was the first film adaptation of The Turn of the Screw. Michael Winner imitates the images of The Innocents – the cutaways to insects, worms crawling across lettuces and maggots in people’s hair – although fails to understand the point of the effects and fails to evoke the feeling of horror these had in the original. Marlon Brando plays Quint with a badly contrived Irish accent but at least he has a certain fascination when on screen, something that Stephanie Beacham’s wooden Miss Jessel fails to do.