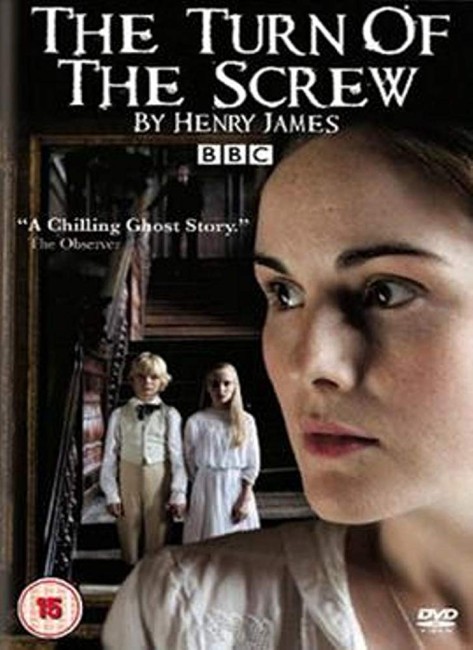 In 1925, Dr Fisher interviews Ann, a patient in the asylum where he works. He persuades her to open up and tell her story. A few years ago, she, aged twenty, applied for the position and was accepted as governess of two children on the large Bly Estate. She was charmed by the master, although he was disinterested in the day-to-day running of the estate or care of his wards. Ann arrived at Bly House, which was tended by women after all the men had been drafted for the War. She minded young Flora and not long after they were joined by her brother Miles after he was expelled from boarding school. Ann became certain that Flora and Miles’ often wicked and adult ways were due to their being haunted by the ghosts of Peter Quint, the brutish former groundsman, and his mistress, the previous governess Miss Jessel. Others present were less sure about the reality of ghosts, even as Ann tried to force the children to acknowledge their existence.

Henry James’s The Turn of the Screw (1898) is a literary classic. It is a story that hovers in a delicate state of ambiguity about whether its ghosts are real or whether the governess is projecting her own repressed imaginings onto the children’s actions. Much debate has centred around whether it can be read as a ghost story or as a mundane tale of psychological repression. James neither confirms or denies one way or the other. There have been a number of film adaptations (see below). This ambiguity of approach between whether events are supernatural or mundane in explanation was highly influential and served as inspiration to producer Val Lewton, who made a series of horror films beginning with Cat People (1942) that similarly hover between mundane explanations and the supernatural.

This film version makes a number of changes to the story. One of the more striking is that there is much more of a sexual element to the story where it is now seen that Quint would sexually abuse the womenfolk of the house. There is also an element of attraction between the governess and the master (who is later seen as a womanising lecher, although this could be simple one of the unreliable stories that are recounted throughout), while she longs for his return. The other touch is the introduction of the psychologist (Dan Stevens) in the wraparound segments. The Turn of the Screw is a psychological ghost story and this is an addition that serves the function of highlighting the psychological elements and analysing Ann’s motives and actions.

As with most adaptations of The Turn of the Screw, this version is stuck with certain problems due to simply coming via the filmed medium. Because everything we see is relayed via the image rather than the ambiguity of the printed word, the film slides over into being a more overt ghost story and is thus less ambiguous. The Innocents (1961), the best of the film versions, is still the only one that truly grasps the subtle and haunting effect of the story.

Certainly, Tim Fywell, a regular British tv director, does a fair job of suggesting this – although he gives us far more in the way of ghostly appearances than Henry James ever did. He does an especially good job when it comes to depicting what Michelle Dockery is projecting, especially a scene where she insists on seeing something sexual in the scenes of the children rolling around in the grass.

This version even takes the ambiguity of approach so far as to offer up two differing accounts of what happened in the past with Quint. The film also ends on a coda with the next governess approaching and the sense that the entire scenario is going to repeat itself over again – something that definitely comes down on the side of the supernatural.

Michelle Dockery, who was just an emerging actress at the time, is an unusual choice as Miss Giddens, here named simply Ann. She has glossy skin that makes her look like a mannequin, while her hair is pulled back into a severe bun that gives the impression it has caused her face to be frozen in a perpetual expression of surprise. The children are well cast, especially good being Josef Lindsay who is all smiling blonde good looks – he is one of the few others in the part of Miles to suggest the grown-up sophistication and toying manneredness that Martin Stephens did in The Innocents.

This version updates the Henry James original from the 1890s to the mid-1920s. The film’s exact timeframe is somewhat confusing as it takes place when all the menfolk of the house have gone off to the War, although we see from the gravestone that Quint and Miss Jessel died in 1920, which would mean that their deaths, which take place before the timeframe of the story begins, occurred after World War I, which ended in 1918.