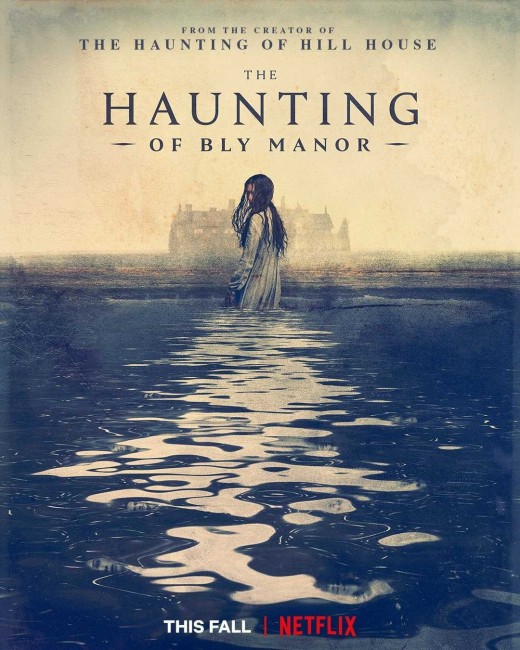 The night before a wedding, one of the attendees tells the assembled guests a ghost story. In 1987, American Dani Clayton, a former teacher, was in England and applied to lawyer Henry Wingrave for an au pair job tending his young niece and nephew Miles and Flora. She was hired and moved to Bly Manor in the countryside, alongside the housekeeper Hannah Grosse, the gardener Jamie and cook Owen. Dani began to see a sinister figure around the estate and came to realise this may be Peter Quint, Henry’s driver who disappeared after stealing money. She came to learn the backstory of the relationship between Quint and her predecessor Rebecca Jessel, which ended with Miss Jessel drowning herself in the lake. She realised that the ghosts of Quint and Miss Jessel were present on the estate. Behind this was a complex backstory that has affected Henry, the children and their parents and going back to the seventeenth century when two sisters inhabited the house.

The Haunting of Hill House (2018) was a Netflix mini-series that aired in ten episodes of around one hour apiece. It was directed by Mike Flanagan, the rising genre director behind other works of recent years such as Absentia (2011), Oculus (2013), Before I Wake (2016), Hush (2016), Ouija: Origin of Evil (2016), Gerald’s Game (2017) and Doctor Sleep (2019). Flanagan built Shirley Jackson’s novel The Haunting of Hill House (1959) out into a complex family saga following a group of characters in the present and as children and the way in which the title house had affected them. The show proved to be a huge hit.

The popularity of The Haunting of Hill House led to pressure on Flanagan to create a follow-up. The Haunting of Hill House is not exactly a story that lends itself to a sequel and so Flanagan and co turn to another ghost story, The Turn of the Screw (1898) by Henry James. This is regarded as one of the classic of the genre, even though it is a work that remains subtly ambiguous, leaving you uncertain whether the ghosts are real or are in the governess’s imagination. The story has been multiply filmed (see below) – indeed, a more regular version of the story came out earlier the same year with the widely panned The Turning (2020).

This time, Flanagan steps back from the director’s seat after the first episode – he is present throughout as Executive Producer and gets a ‘Created for Television by’ credit. Flanagan likes to recycle actors from film to film. Various actors from The Haunting of Hill House make return appearances in different roles – Victoria Pedretti who was the ill-fated Eleanor takes the lead as the governess Dani, while Oliver Jackson-Cohen who was the drug-addicted brother Luke plays Quint; Kate Siegel (Mrs Mike Flanagan) who played the memorable Theo in Hill House now plays Viola, the 17th Century sister who becomes a ghost; and Henry Thomas who played the young Timothy Hutton becomes the children’s uncle, while Carla Gugino who was the children’s mother in Hill House acts as the narrator in the first and last segments here.

The directorial chores have been inherited by an assortment of directors, none of whom get any more than two episodes apiece. These include Irish director Ciaran Foy, who made the eerie Citadel (2012) followed by Sinister 2 (2015) and Eli (2019); the Australian duo Ben Howling and Yolanda Ramke who previously only made the zombie film Cargo (2017); Belgian director Axelle Carolyn who previously made Soulmate (2013) and one of the segments of the anthology Tales from Halloween (2015); Irish/Welsh director Liam Gavin who previously made A Dark Song (2016); and American director E.L. Katz, also an executive producer on the show, who previously directed Cheap Thrills (2013). Each of the episodes comes from a different writer.

The problem with adapting The Turn of the Screw to a mini-series of nine one-hour episodes is that the original story is a novella that runs to just over 100 pages. There is barely anything there for Flanagan and co to build out into the cross-generational saga they did with The Haunting of Hill House. For example, there are only really three characters in the original story – the new governess who doesn’t even get a name (here she is named Dani Clayton possibly in tribute to Jack Clayton, the director of The Innocents (1961), the first film adaptation of The Turn of the Screw) and the children Miles and Flora. The housekeeper Miss Grosse and the children’s disinterested uncle are present but are peripheral characters. There is also the previous governess Miss Jessel and the groundsman Peter Quint who are believed by the governess to be haunting the children and are discussed but do not appear in the story’s present frame. That’s it.

That The Haunting of Bly Manor has made considerable changes to The Turn of the Screw is probably an understatement. In having to fill nine episodes and create another cross-era story, the mini-series builds out every single nuance of the original story into a major story arc. Henry James never asked why the governess was so emotionally repressed, why the uncle was disinterested in the children or the estate, how the children ended up orphans, or what Miles did to get expelled from boarding school. Indeed, James never concerned himself with what Quint and Miss Jessel actually got up to – Quint is usually portrayed as a character who was brutish in his passions but no more than that. In the mini-series, all of these questions are built out into multi-episode story arcs. There are new characters added to the mix from the gardener Jamie, the cook Owen and the children’s parents, going all the way back to the original ghost that haunts the estate in the 17th Century.

The Turn of the Screw has been modernised from its late 19th Century setting – part of the reason for this could well be that the film’s central love story would have had more difficulty working in the Victorian period. It has also gone from a psychological ghost story to an overt ghost story where there is no doubt about the ghosts being real. To be fair, there are some scenes where we see Victoria Pedretti haunted by the ghosts of her imagination – it’s just that the ghost in question is not Quint or Miss Jessel.

The one thing that kept jolting me out of suspension of disbelief in the series was its setting and some of its casting. Despite the show being set in England, the mini-series was shot in British Columbia, Canada as opposed to England – the street scenes supposedly representing London are visibly ones of downtown Vancouver (my current home – I am not sure why they couldn’t have gone on location for these scenes). More so than that, some of the accents seem off to anybody who has spent time around a sufficient number of British people and/or been to England. While the mini-series does cast a number of British actors – T’Nia Miller, Rahul Kohli, Amelia Eve, Tahirah Sharif, Amelie Bea Smith, Benjamin Evan Ainsworth, Matthew Holness – there are those that are not such as Carla Gugino, Kate Siegel and Alex Essoe. The difference is most notable when it comes to Henry Thomas’s attempts to affect a posh British accent. (I had assumed that Oliver Jackson-Cohen’s Scottish accent was fake but can give him a pass in that he is British-born).

Not to mention that the conception of the show often seems American rather than British – the boarding school scenes are conceived in terms of an American public school and clearly not written or directed by somebody who is familiar with the British boarding school system. And then there is the odd pronunciation – the insistence on referring to a parapet as ‘parra-PETT’ rather than ‘parra-pit’, or the character known as ‘Per-ditta’ rather than ‘Per-deeta’ as an English person would say.

Mike Flanagan starts the series off well with a strong first episode that follows the general set-up of The Turn of the Screw. Flanagan expectedly handles it like the pro he is with eerie almost subliminal scenes where Victoria Perdetti is haunted by the shadowy figures with big glowing eyes and several unexpected jumps. The surprise is that despite the show coming from several diverse directorial hands and every episode being written by a different writer that is all comes together as a single seamless mood that feels as though (if you didn’t know otherwise) it could have been made by a single director and as a grand narrative with themes and elements woven throughout.

As in The Haunting of Hell House, Flanagan and co build the original story out into a complex backstory crossing multiple generations (and even centuries). It is a show at its heart about how people deal with traumatic events, of how the past is allowed to maintain its hold and eventually of the healing power of love. From Episode 5, things start to get exceedingly strange with characters seemingly trapped inside memories and then characters within the memories breaking the narrative to talk to them. The next couple of episodes weave a complicated labyrinth of nested memory flips where characters move in and out of each other’s memories – something the series refers to as ‘dream hopping’ or ‘being tucked away’ (which offers a unique explanation for possession that takes the point-of-view of the possessed), although for a couple of episodes at least this does leave you confused as to what is going on.

Where The Haunting of Bly Manor comes into its own and starts to become a particularly strong show is about the point that it abandons Henry James altogether in the last four episodes. One of the finest pieces about these episodes is some of the writing and metaphors woven – between Jamie’s talk of her father as a miner dealing with lifeless organic matter that had been crushed into coal underground to the joy she finds in dealing with living organic things aboveground to the talk of the gravity of wrath and self-willed determination that imprisons the dead within its grasp.

Throughout the 2000s-10s, the ghost story feels like it is a genre that has become trapped inside its own repetitive tropes but Bly Manor does extraordinary things in turning it inside out. The story where we see Rebecca being tricked into joining Quint is particularly strong. The series is at its strongest when it comes to the story of Viola and the way she has affected all the others, while the final episode becomes a long coda that travels through to the present-day and brings everything to a beautiful and emotional conclusion and a surprisingly uplifting love story.