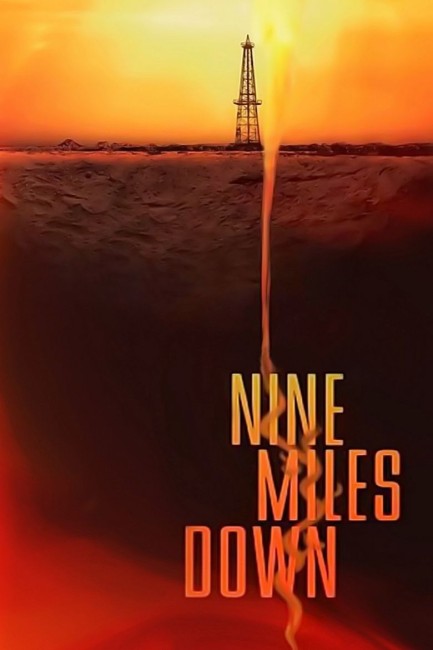 Thomas ‘Jack’ Jackman, a security operative for an oil company in the Sahara desert, is sent out to the remote Jebel Afra drilling site to find what happened to the personnel. The site has been leased to a team of geologists led by Professor Borman who were seeking to drill nine miles down, deeper than any drilling that had been conducted before, in search of samples. Jack finds the base deserted where the personnel appear to have gone crazy, even having conducted animal sacrifices. He encounters a sole survivor Jennie Christianson who urges him to leave at once. However, after he finds the bodies of the other scientists, Jack receives orders to stay. He questions Jennie about what happened. She plays back tape recordings from the drill head and when Jack filters them out, he hears screams coming from the pit and believes that the team have physically drilled down to Hell. When homebase reports that there were no women members of the research team, Jack begins to believe that Jennie is a female devil. Haunted by visions of his dead wife, Jack cannot be sure if Jennie is sent from hell to tempt him to surrender his soul or if, as she claims, he is suffering from hallucinations because he is being mentally affected by a toxin released from the pit.

Nine Miles Down was the fourth film from British director Anthony Waller. Waller first appeared with the snuff movie thriller Mute Witness (1995). This immediately signalled him as a director of great promise, although this has never quite been fulfilled with Waller’s next films An American Werewolf in Paris (1997) and the thriller The Guilty (2000). For most of the 00s, Anthony Waller circled around the perpetually announced Nine Miles Down and the artificial intelligence quasi-documentary The Singularity is Near: A True Story About the Future (2010), with both being released towards the end of the decade but failing to achieve wide distribution.

Finally sitting down to watch Nine Miles Down, I expected from the film’s synopsis something reminiscent of Larry Fessenden’s The Last Winter (2006), a film similarly set at an Alaskan drilling base where the crew disturbed something buried in the ground with their drilling that then starts killing/affecting the people at the base. Both Nine Miles Down and The Last Winter in turn owe much to The Thing from Another World (1951) and its remake The Thing (1982), which created the quintessential plot of the crew isolated at a remote base being attacked by a creature. These and other imitators of The Thing are essentially stripped-back isolation dramas – Nine Miles Down takes this to the extent that the bulk of the film (some 95% of the running time) is occupied by only two characters, Adrian Paul and Kate Nauta (with infrequent cuts back to base and appearances of Meredith Ostrom as Adrian Paul’s dead wife).

Once events start to kick in, Nine Miles Down reveals a plot that comes with a head-scratchingly left field corniness. When Adrian Paul starts exploring the deserted base and we gets hints in video clips and books left open that he is dealing with something demonic, I had the immediate sinking feeling that we were in for a ground-based version of Event Horizon (1997) – a film about a spaceship that returned after having physically passed through Hell. (Perhaps even closer than this was Sometimes They Come Back … For More (1998), another clearly Thing-influenced film featuring a team investigating satanic forces loose in a polar base). This is confirmed not long after as Adrian Paul starts hearing the voices of damned souls in the sounds coming up from the pit and then thinks that survivor Kate Nauta might be in league with or a manifestation of the Devil. These revelations kick in with a clunky laughability – the discovery of a physical Hell was an absurdly corny plot device in Event Horizon and is just as much here.

To his credit, you cannot deny that Anthony Waller creates an exceedingly haunted atmosphere throughout – noises and bangings, sudden jumps provided by voices on video recordings, Adrian Paul thinking he sees figures in the sandstorm or hands banging at the window of his Jeep as he tries to sleep. There is one clever scene where Adrian Paul faces his demonic self in a mirror, which is reflected into infinity in the mirror behind, and then raises a gun against his forehead and we see tiny flashes off in the far distance, which as they come closer reveal themselves to be gunshots of each of the reflections shooting themselves.

Anthony Waller also creates considerable ambiguity between whether Kate Nauta – a relative newcomer previously best known as the lingerie-clad girl with guns in Transporter 2 (2005) – is someone sinister who may not be the scientist she claims and is quite possibly an envoy from Hell, or a purely mundane interpretation where everything is given a semi-plausible explanation. The script sets up a classic dichotomy between reason and belief in the supernatural – something heavily underscored in one dialogue scene between Adrian Paul and Kate Nauta at one point. This turns the build-up and expectation of another Event Horizon type film into a Lewtonian film – after Val Lewton, a producer during the 1940s who made a classic body of films beginning with Cat People (1942) that constantly vied between whether the menace present was supernatural in nature or purely in the minds of the protagonists.

[PLOT SPOILERS] The latter half of the film emerges as a variant on The Crazies (1973) and a body of films that have copied this such as Impulse (1984), The Signal (2007), Pontypool (2008), Salvage (2009), YellowBrickRoad (2010), the remake of The Crazies (2010), Patient Zero (2012), Urge (2016), Mayhem (2017) and Mom & Dad (2017) about protagonists being infected with a toxin/virus that causes them to go mad. Some of the juggles between reality and hallucination – Adrian Paul reconciling with his dead wife, which is abruptly reversed to be seen from Kate Nauta’s point-of-view as him cuddling a carcass of meat in the kitchen; her taunting him that she is the Devil and demanding that he relinquish his soul; or where he enters the hospital in search of her at the end – are conducted with an adept ingenuity, even if it is not quite as clever a one as was present in the original Val Lewton films.

Nine Miles Down was co-written by veteran Australian genre writer Everett De Roche who has written a number of other Australian genre films including the excellent Nature’s Revenge film Long Weekend (1978), Patrick (1978) about a psychic coma patient, the stalker psycho-thriller Snapshot/The Day After Halloween (1979), Harlequin (1980) about an enigmatic magician, the psycho-thriller Roadgames (1981), the killer boar film Razorback (1984), the killer chimp film Link (1986), the Aboriginal children’s fantasy Frog Dreaming/The Quest (1986), the psycho-thriller Heart of Midnight (1988), the ghost story Visitors (2003), the Backwoods Brutality film Storm Warning (2007) and the remake of Long Weekend (2008).