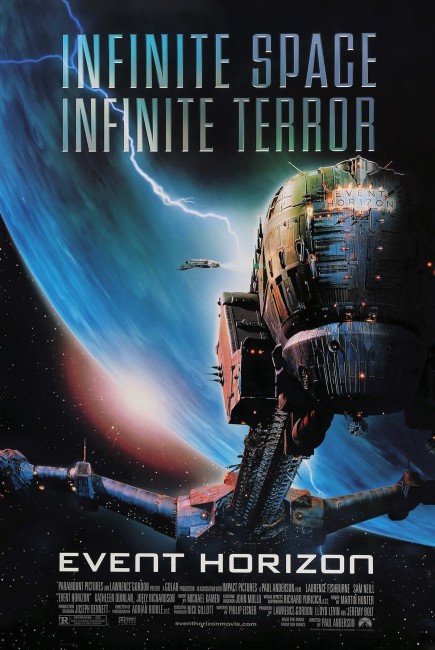 The year 2047. The rescue ship Lewis and Clark is despatched on a mission to investigate after the spaceship Event Horizon suddenly reappears in Neptune’s atmosphere. The Event Horizon was launched seven years earlier, using an experimental Faster-Than-Light drive that harnessed a singularity to physically warp space around the ship. However, the Event Horizon went missing as soon as its drive was activated. Docking with the Event Horizon, the team find the bodies of the crew mutilated and torn apart. The ship’s log contains recordings of unearthly screams and someone screaming “save me” in Latin. Soon after the crew of the Lewis and Clark begin to experience hallucinations and are then driven to commit suicide in bizarre ways. They realize that the Event Horizon’s warp drive has opened up a gateway to Hell and that the ship has returned bringing something evil with it.

The late 1990s was a peculiar time for mainstream genre releases. It was the point when works like Terminator 2: Judgment Day (1991), The Lawnmower Man (1992) and Jurassic Park (1993) had between them created a revolution in CGI special effects. Everybody suddenly seemed to have money to burn on big-budget sets, effects and pure razzle-dazzle – everything except decent scripts. There was a time – like the lead-up to the (then) massively over-budgeted Titanic (1997) and its almost certain financial collapse – when you thought that sense had left Hollywood altogether.

Event Horizon is one such entry where sense seems to have abandoned many of the people involved. It is an A-budget special effects vehicle decked out with maximum production polish, yet at the same time is a film with a premise – a spaceship returns after passing through Hell – that belongs to a hokey B movie. Indeed, the same idea had previously been done a few years earlier as the unmemorable The Dark Side of the Moon (1990) and earlier to some extent at the end of Disney’s The Black Hole (1979) and one of the sillier episodes of Battlestar Galactica, the two-parter War of the Gods (1979).

In pre-release, the sets and the look of Event Horizon seemed so promising that you thought the film might pull off something dazzling. In sitting down to watch Event Horizon, it transpires as a film that make no sense. The script never clarifies whether it means the ship has passed through Hell literally or figuratively – it bandies around some meaningless phrases about “ultimate evil” and “something infinitely more terrifying than Hell,” although at other times it is happy to dabble in imagery that is more traditionally associated with Hell – cabbalistic runes painted in blood, cryptic phrases spoken in Latin. (Although, why an English-speaking crew are given to suddenly scream out in Latin just as they are about to die is yet another part of the film that make no sense).

Nor does the script have much of an idea what to do with its concept of Hell once it is introduced. In traditional Christianity, Hell is supposed to be a place of punishment for those who have failed to obey The Almighty’s moral laws but in the film it is only a glorified raison d’etre for an Alien (1979) knockoff, as well as an end that leaps off into Hellraiser (1987) territory.

Despite a paper thin and senseless plot, Event Horizon undeniably works in places. It is, for instance, one of the few outer space films to bother to have the gravity off. (That said, it is uneven about applying such things – sometimes the gravity is off and other times on; while in other places we have a depiction of explosive decompression when Jack Noseworthy opens the airlock but this is conveniently forgotten about when the window on the bridge is shattered).

What is dazzling about Event Horizon is its fusion of hard science-fiction and the haunted house sub-genre – what we have is essentially a traditional haunted house story where a malevolent spirit is stalking people through the corridors of a spaceship instead of a gloomy Gothic mansion. It is a logical extension of the space-going ghost story that Solaris (1972) was aiming for and is something that makes for a unique venue.

The production design team have gone to town creating some beautifully Gothic sets – corridors that stretch into perspective infinity; the warp drive engine as a giant rotating studded ball in matte black; the medlab like a Mediaeval torture chamber; and eerie moments where the exploratory party pass through the unlit bridge and flashes of light from the control grottos reveal splattered human remains inside.

One cannot deny that for all Event Horizon‘s stupidity, director Paul Anderson creates an exemplary build-up of atmosphere and eerie dread. The scenes creeping about the ship with voices calling around the stereo soundtrack and subliminal flashes are genuinely spooky (although Paul Anderson does overdo the red herring jump shocks at the start). The film’s effects set-pieces are often stunning – beautiful visions of the Event Horizon appearing out of the clouds of Neptune’s atmosphere; the dazzling opening shot that pulls back from the window of Daylight station and rotates as it passes through the vast structure of the station and keeps on pulling back until we are well out in orbit around Earth; and one shot that takes the breath away as the front half of the Event Horizon is blown away and passes through a ring of flames as it heads to freedom.

The relatively well-known cast are a mixed bunch – most seemed perplexed by the technical doublespeak, especially Joely Richardson. Laurence Fishburne has a hard-headed toughness that is effective. Although the Sam Neill monster at the end is too much – and a point that causes the film’s exceedingly tenuous level of credibility to sink.