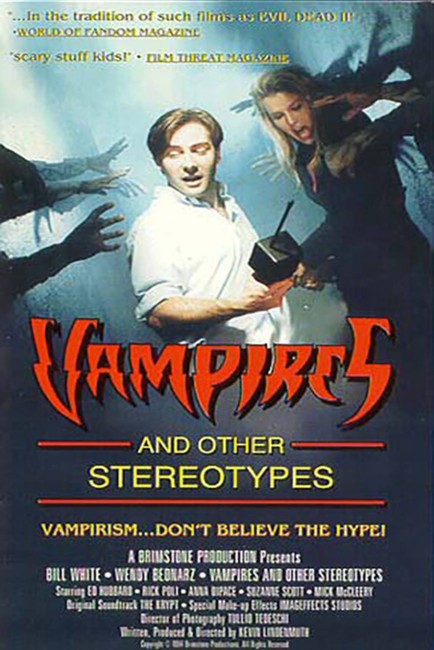 Three female roommates are lured to a New York warehouse by a date on the promise of a party. There they meet two men, Ivan and Harry, who are professional monster hunters. However, when they entered the warehouse one of the girls impaled her hand on a nail and this has inadvertently opened up a gateway to Hell and allowed demons and other creatures to emerge and take over the warehouse. The group’s only hope is to survive until morning, otherwise all Hell will be loosed to roam the world.

Low-budget independent video filmmaking has usually become the province of the modern Edward D. Wood Jr’s, the Herschell Gordon Lewis’s and the Andy Milligan’s. Video has proven a bonus for no-budget filmmakers – it is instantly accessible, cameras are cheap and it does not require exorbitant lab costs. Certainly, most low-budget video-made genre films remain that way for a very good reason – films tend to be cheap, badly made, fannish ripoffs of other films, rather than original or worthwhile stories in their own right. That said, there are some exceptions and Kevin J. Lindenmuth is most certainly one of them.

Kevin J. Lindenmuth’s considerable ingenuity here is in being able to use a single warehouse as his location – one where, through a minimal number of special effects and suitable generation of an otherworldly sense of dis-ease, he willingly engages our suspension of disbelief to accept as a doorway to Hell. Lindenmuth’s plot is ambitious – he creates a complex demonology behind it, which is more than most horror films concern themselves with, and there are some often surprising moments of characterisation.

There are some effective makeup effects – walls of screaming faces, a giant rat and (in an Evil Dead II (1987)-esque touch, something the film reminds of a little, albeit conducted more seriously) a disembodied hand with a talking mouth. Lindenmuth tends to fall down when it comes to the generation of tension though. Scenes like where the group hold off against zombies trying to break down a door or run past the giant rat are directorially flat. Other than that, Vampires and Other Stereotypes is remarkable in terms of the success of its ambitions far beyond the limitations of its surroundings.