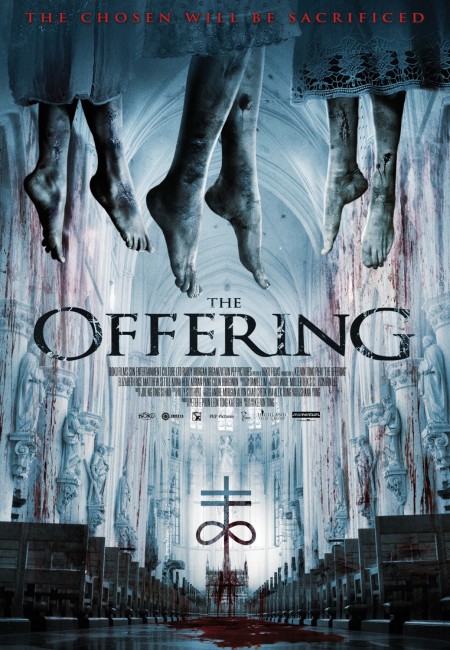 aka The Faith of Anna Waters

Jamie Waters, a police detective in Chicago, receives news that her sister Anna has committed suicide in Singapore. Jamie flies to Singapore and moves in to Anna’s house. Rather than go and stay with her father, Anna’s young daughter Katie is insistent that they do not leave the house because her mother has promised that she will return in seven days time. At the same time, the Catholic priest Father De Silva encounters a series of cryptic symbols that indicate that the Tower of Babel is rising again. As Jamie investigates other apparent suicides by people connected to Anna, she encounters increasingly spooky happenings all around the house.

The Offering, which was renamed The Faith of Anna Waters by its US distributor, is a Singaporean-made film. Director Kelvin Tong has been working since the 1990s and has made several other horror films with the likes of 1942 (2005), The Maid (2005), Ghost! Ghost (2007) and Rule Number One (2008), plus films in other genres including the SF film Republic of Food (2018).

The Offering/The Faith of Anna Waters has been made for international appeal with the principal roles cast with American actors and the Singaporean locals present pushed well down to the supporting cast. Even then it is a film that has not been able to afford many high-profile names – the most well-known it manages to get are Elizabeth Rice who appeared in several episodes of Mad Men (2007-15) and Matthew Settle, a regular on Gossip Girl (2007-12).

The Offering/The Faith of Anna Waters is fairly standard for the horror film being served up these days. Kelvin Tong creates some mood and one or two jumps – the weirdness of the image of a child’s doll come to life and jumping on a trampoline. The main problem for me was that what we have feels like an assemblage of elements from various horror films – hauntings, the mother promised to return from the dead, a bunch of suicides connected by a cult-like leader, Satanic anagrams and ominous portents that evil is about to occur, witnesses being supernaturally killed just as the heroine finds them, a possessed child and a climactic exorcism by the priests.

What it is lacking is any underlying rationale about why things are happening – they are just pop-up elements thrown at us. In particular, the religious elements are nonsensical – in The Bible, The Tower of Babel is meant to be an allegory about human hubris and an origin story for language whereas here it is seen as a symbol of evil and deviltry emerging in the present.