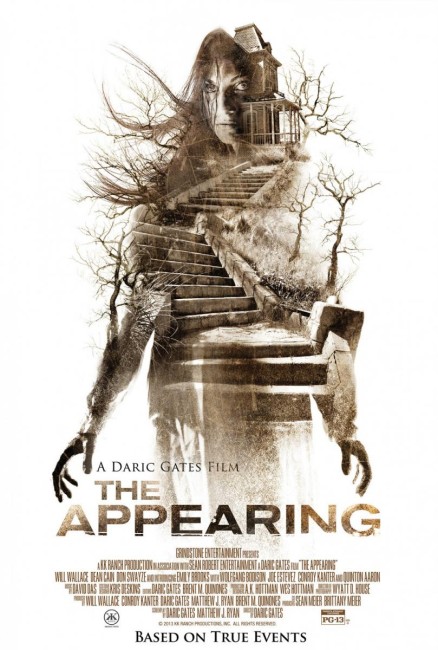 City detective Michael Brody and his wife Rachel move to the sleepy town of Glenwood Bay to get over the death of their child. As soon as they are there, Michael is pressed to help the local sheriff Jed Hendricks solve the disappearance of teenager Susie Dudley who snuck into the old, abandoned, reputedly haunted Granville House with her boyfriend. At the same time, Rachel sees ghostly figures in the woods. She is drawn to Granville House where she sees the murder of a young girl that happened in the past play out. As both of them uncover the town’s secrets, this causes the demonic forces in the house to stir.

The Appearing is a fairly average direct-to-dvd release, typical of the fodder that clutters up sales shelves and cable backwater. It was the fifth film of director Daric Gates who had previously made three dramatic, non-genre films that gained little recognition and then the supernatural thriller The Lady Masquerade (2009). The only recognisable names in the cast seem to be former stars – Dean Cain in a brief appearance as a psychiatrist – or brothers of more well-known actors – Patrick’s brother Don Swayze in a reasonable performance as the Bible-quoting sheriff and Martin Sheen’s brother Joe Estevez in a couple of scenes as a crazy locked in a jail cell.

The Appearing did little to enthuse me as it started in. Daric Gates seems to want us to think we are watching a haunted house film – the classic old place where bad things happened and people go missing. He delivers jumps that are utterly by the book and so banal they have zero impact. The entry into the house is signposted with lame lines like “this place is so creepy … something doesn’t feel right.”

The casting also seems off. Will Wallace – who could pass for a more chubby-faced brother of Chris Mulkey – goes over the top whenever he is required to play a law enforcement official. At almost every scene questioning or interrogating someone, he seems to go from zero to red-faced anger in about five seconds flat and you find it hard to believe that someone who went into everything with such an attitude would manage to remain on the force.

On the opposite side of the coin, cast as Will Wallace’s wife, Emily Brooks is so bland you suspect that she is an amateur actress. Certainly, this does have some undeniable effect when she becomes possessed – there is one effective scene where she bends over backwards in the woods and then suddenly turns around with yellow eyes – which comes at striking contrast to her earlier nondescript character.

The main problem with The Appearing is that it is a dull and uninteresting film that tries to get clever and throw in an extended left field twist ending about what is going on, the same type of left field twist that the ghost story genre seems to feel it has to keep churning out variations on ever since The Sixth Sense (1999). This almost starts to become interesting where the film ends up swinging a very complicated plot that involves [PLOT SPOILERS] – a haunted house that isn’t, repressed memories of a child murder, demonic possession, town secrets and cover-ups. You can follow it by the end explanation but there is the feeling that the film has bitten off too ambitious a twist ending than it is capable of delivering.

Coming out not long after the success of The Conjuring (2013), The Appearing offers a very similar claim that it is based on a true story but, in that it offers no details whatsoever to back such up, this can only be regarded as a fiction.