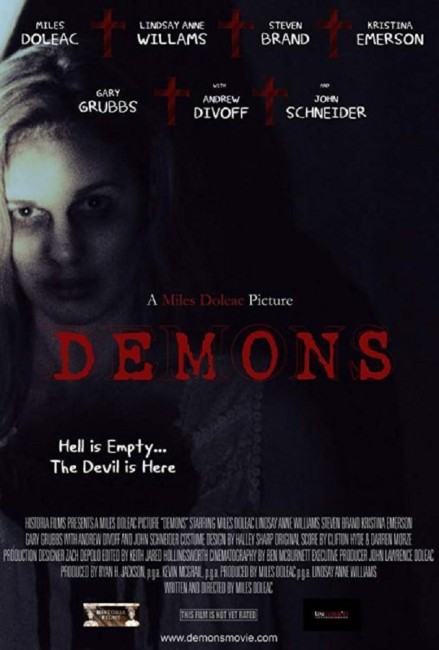 Colin Hampstead is a former Catholic priest who is now married to Kayleigh and is a successful author. Several friends arrive for the wedding of Eddie and Lara. At the same time, Kayleigh is haunted by the ghost of her late sister Jewel. This causes Colin to remember back to the incident that caused him to lose his faith where he was brought in by Kayleigh’s father to perform an exorcism on Jewel.

Miles Doleac is a name that has been bubbling under the radar. He has appeared as an actor in a good number of (usually supporting) roles in films like Shark Lake (2015), Don’t Kill It (2016), Attack of the Southern Fried Zombies (2017), Mississippi River Sharks (2017), Santa Jaws (2018), and tv shows such as American Horror Story (2011- ), Containment (2016), The Purge (2019- ) and Lovecraft Country (2020- ). At the same time, Doleac also works as a director/writer and Demons was his third film. As director, he has made the non-genre The Historian (2014) and The Hollow (2016) and the subsequent horror movies Hallowed Ground (2019) and The Dinner Party (2020). He has also made acting appearances in all of his directorial outings, which also co-star and are co-produced by Doleac’s wife Lindsay Anne Williams.

Demons – not to be confused with Lamberto Bava’s earlier Demons (1985) – starts out following the familiar cliches of a possession and exorcism film. There have been a vast body of cinematic works ever since The Exorcist (1973) laid down the groundwork over forty years earlier. (See Possession Films and Exorcism Films). The genre has created a series of repetitive cliches – the possessed in cracked face bound to the bed taunting obscenities and vomiting; the exorcists as dutiful Catholic priests chanting rituals (no other religion ever seems to get a look-in).

While the possession and exorcism elements play out by the book, you do have to commend Miles Doleac in that he writes reasonable characterisations for all his cast – even provides them with a series of philosophical debates – and chooses quite reasonable actors in the roles. He himself does well in the lead as the former priest who has renounced his faith – the story has an unfolding structure that flashes back and forth between the present and what happened with the exorcism in the past.

The film works okay, nothing standout. It does reach an interesting where [PLOT SPOILERS] it is revealed there was no actual possession, instead a case of incest and abuse. (This fails to quite explain Jewel’s manifestations and talking in Latin). It makes for an ending that is a bit of a letdown, although the film does go out on the ghost girl taking retribution on her abusers.