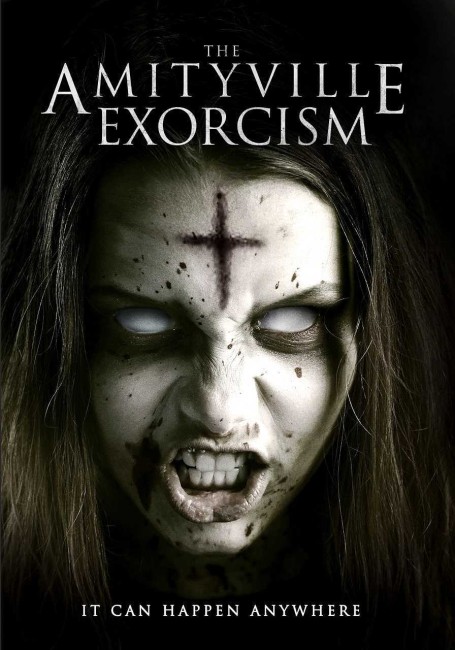 Father Benna, whose brother conducted the exorcism of the Amityville House, hears the confession of Charles Humes, a convicted killer who is awaiting execution at the Amityville Asylum for the Insane. Humes tells how he took lumber from the Amityville House and used it in the construction of another house. This other house is now owned by Jeremy Dukane. Jeremy has a bad drinking problem that led to the death of his wife. Jeremy’s teenage daughter Amy now becomes possessed by the lumber in the house. She walks out, exhibiting powers that kill people. Father Benna comes to Jeremy, persuading him that they must conduct an exorcism to drive out the evil possessing Amy and the house.

The Polonia Brothers, whether together or Mark on his own, have been making films since the 1980s and the fifty plus films they have made have all been down the Z-budget end of the spectrum. Amityville Exorcism is no different to any of these. Its location is a regular suburban home – given the lack of production designer and even art director credit on the film, you can make a guess that Mark Polonia filmed in his own house or took his camera into the home of somebody he knew and filmed there.

Amityville Exorcism is mostly a possession and exorcism film. This leaves it resembling Amityville II: The Possession, one of the better legitimate sequels to the original, which also conflated the basic haunted house story with a possession and exorcism plot. What causes this film to plunge into ridiculousness however is the notion of possessed lumber – yes, a corner of the cellar in the house where we see stack of about a dozen pieces of timber. The lumber sits there innocuously and never actually does anything throughout but everyone reacts to it as though it were the cause of great evil.

The action seems to consist of not much more than Marie DeLorenzo wandering around the nearby woods, encountering various people and then causing them to undergo a meltdown. We get a really crappy swarm of optically superimposed bees in a shed at one point. The last twenty minutes of the film consist of an exorcism where Polonia has borrowed everything from the playbook established by The Exorcist (1973) and has Marie DeLorenzo with cracked, pasty face bound to the bed and taunting in a deep voice as priest Jeff Kirkdendall and her father James Carolus chant the rituals of exorcism.

The film suffers from bad acting, Jeff Kirkendall, a regular Polonia actor, is okay as the priest. On the other hand, Marie DeLorenzo becomes stilted once possessed. All her dialogue is crossly spat out and over-emphasised – surely the spoke equivalent of being written with each word capitalised. James Carolus as the father similarly overplays the drunk part and just seems a goofy over-eager guy trying to play a role not very well.

Mark Polonia had earlier made Amityville Death House (2015) and subsequently went on to make Amityville Island (2020), although I am unable to ascertain if any of these are meant to be connected. Jeff Kirkendall appears in all three films but plays different characters, while Marie DeLorenzo, James Carolus and Ken Vansant (all Polonia regulars) each also play in more than one of these but all in different roles. However, the subsequent Amityville in Space (2022) does feature Kirkendall reprising the same role he does here.