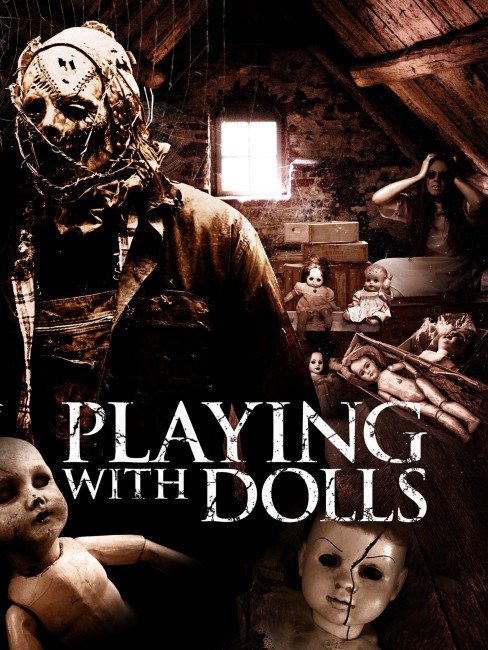 Cindy Tremaine is penniless after her roommate has unexpectedly moved out and with her last job refusing to pay her. At the same time, her landlord is pressuring her to have sex for free rent. She then receives a callback from a job interview where the company offers her a position that pays a great deal of money. They provide her with a vehicle and directions to a remote cabin that she is to tend and clean for a wealthy client who is away in Denmark. As Cindy settles into the cabin, what she does not know is that a hulking masked killer has been loosed in the area and is stalking her with every move being observed by hidden cameras.

I was not quite sure what to expect from Playing With Dolls. The title suggested something more along the lines of a killer doll film like Child’s Play (1988) and sequels or something of the recent The Boy (2016). What it doesn’t suggest is the film that we get. Mindedly, after watching Playing With Dolls I am not entirely certain how to pigeonhole it in either. The character with the nasty-looking barbed wire facemask referred to only as The Killer suggests a Jason Voorhees and that the film we are watching is a slasher film. We get various slasher-type scenes with The Killer stalking Natasha Blasick about the house.

The film frequently cuts back to Richard Tyson watching on a bank of tv monitors and we see that the house has been wired with cameras. He seems to have employed The Killer, who has orders to remain within the designated territory, to stalk and pursue Natasha. This turns the film into something akin to a slasher variant on The Most Dangerous Game (1932), which involves someone forced to survive with their bare hands while pursued by a well-armed hunter, the basic scenario of which has been used in numerous different films.

We are not exactly sure why Richard Tyson is doing this, although we get the impression that he is making some kind of snuff video and/or is an eccentric billionaire who has set this up for his amusement. Mostly the scenario and what is happening leaves you confused. It feels like a film that has been construed with a bunch of generic elements – a hulking killer in a mask, a remote cabin in the backwoods, a Most Dangerous Game scenario, covert surveillance – more than it has an underlying rationale.

Playing With Dolls is passably made, nothing that gets one excited. Some of the pop-up effects with The Killer are more risible than spooky – he lurking on the top of a wardrobe and reaching down to almost touch Natasha Blasick, popping out of a hidden door and moving her wineglass while she momentarily leaves the room, hiding under her bed and pushing the slipper she is looking for back out to her. It feels rather ridiculous when you think of someone who is meant to resemble a Jason Voorhees reduced to doing things like that.

The other thing is that the film has condensed the usual spread of victims we get in a slasher film to only one, plus another girl (Alanna Forte) we see being killed in the prologue. Thus the film spends most of its time doing not much more than have the killer lurking or popping up to gaslight Natasha, as opposed to a standard slasher film that would have offered up a series of scenes with teens being butchered. Most of the actual action occurs near the end. The scene where Natasha Blasick is bent over a log and The Killer prepares to violate her with a branch is just nasty.