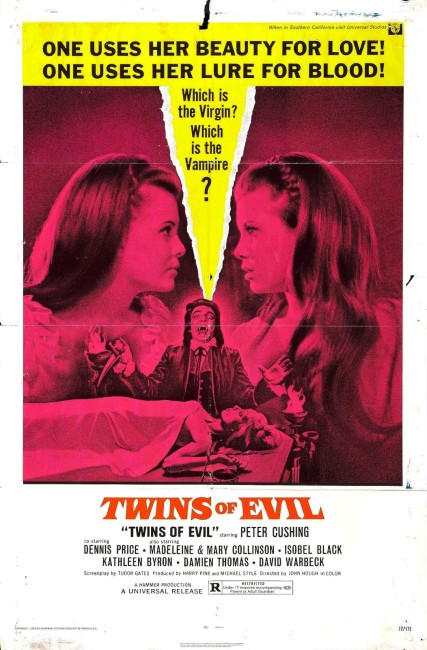 After the death of their parents, the Gelhorn twins, the sensual and cunning Frieda and the timid, conservative Maria, go to live in the village of Karnstein with their puritanical uncle Gustav Weil. Gustav is head of the witch-hunting Brotherhood and opposes the current Count Karnstein. The Count, bored of petty Satanic rituals, offers his soul to the Devil in return for greater pleasures. The blood of a woman he has just killed drops down into the crypt of his ancestor Mircalla and she appears to him as a wraith, putting the bite of vampirism on him as they make love. Karnstein then seduces and makes a vampire of Frieda.

Twins of Evil was the third of Hammer’s trilogy of vampire films adapted from J. Sheridan Le Fanu’s classic horror story Carmilla (1872). Hammer had earlier made The Vampire Lovers (1970) and Lust for a Vampire (1971). Of these, The Vampire Lovers was ponderous and heavy-handed, while Lust for a Vampire seemed made by a giggly adolescent schoolboy. The good news is that Twins of Evil is the best of the three films. Although of the three, it is also has the least point of connection with the Le Fanu story – Mircalla makes a minor token appearance and, while there are schoolgirl vampires, unlike the other films and the story, there is no lesbian element.

Twins of Evil has two standout features. One of these is Peter Cushing who gives one of his finest performances as the harshly authoritarian witchfinder. The other is a vivid, stylish turn of hand from director John Hough, who later went onto make the fine haunted house story The Legend of Hell House (1973) and a number of other genre films (see below). Hough gets occasionally heavy-handed – most absurdly the crudely symbolic closeups on a hand stroking a candlestick during a love sequence. His strong handling, particularly in the revival of Mircalla as a wraith from her crypt, and some unflinching, upfront gore effects does wonders elsewhere.

The film also features twin sisters Madeline and Mary Collinson who briefly attained fame with Playboy‘s first twins nude layout in 1970. Much symbolism is made throughout of doubles and opposites – one virtuous, one carnal twin; the Brotherhood and Karnstein both wielding authority and terror in the region, one fleeing from the crucifix, the other wielding it with holy terror.

Twins of Evil is stopped from attaining the status of one of the great Hammer films by a flaccid story. It wanders – and into most of the Hammer cliches. Little believability is given to Frieda’s becoming a vampire, an element that is the centre of the story – she still lives at home where nobody seems to notice anything different about her, while the script sweeps under the carpet the question of how she manages to go to school during the day.

Also disappointing is the script’s making Gustav and the Brotherhood the heroes of the day. The idea of a vampire film where the crucifix wielders are brutal Puritans is a good one with the film borrowing some of the topical interest in historical witch persecutions that had been created by the success of Michael Reeves’ Matthew Hopkins – Witchfinder General/The Conqueror Worm (1968). However, Tudor Gates’s script is simply not up to the moral complexities that such an association sets up. At the outset, the film creates a strong and powerful menace around the Brotherhood. In order to make the Brotherhood into the heroes of the show, the film need to sanctify their actions entirely, which bluntens their build-up as sinister figures. Their persuasion to reason by David Warbeck is far too reasonable to seem believable.

John Hough’s other genre films are:– the haunted house story The Legend of Hell House (1973); the Disney films Escape to Witch Mountain (1975) and Return from Witch Mountain (1978) about psi-powered alien kids; the Disney ghost story The Watcher in the Woods (1980); Incubus (1982) about a demonic rapist; the British boy’s air hero adaptation Biggles (1986); American Gothic (1987) about a family of psychos; Howling IV: The Original Nightmare (1988) and Bad Karma/Hell’s Gate (2002).