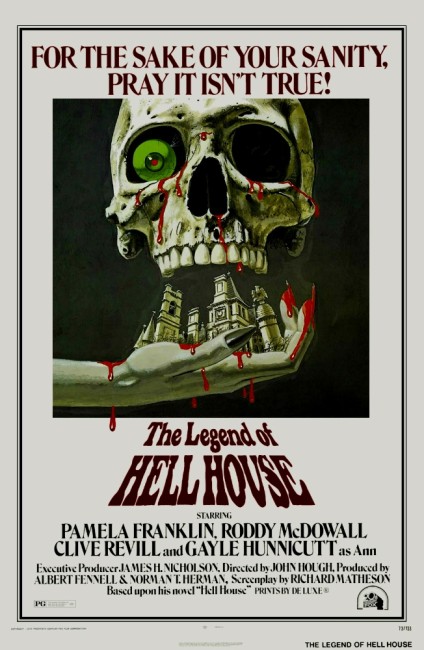 Aging millionaire Rudolf Deutsch wants to be assured of the existence of life after death. He offers a group of parapsychologists and mediums £100,000 each if they will investigate the notoriously haunted Belasco mansion, which has been nicknamed Hell House. A previous attempt to explore the house sent all but one of the investigating team insane. A new team is assembled under parapsychological researcher Chris Barrett. This includes Barrett’s wife Ann and mediums Florence Tanner and Benjamin Fischer, the sole survivor of the previous investigation. Once inside however, the house begins to prey on the team and their individual weaknesses.

There is much similarity between The Legend of Hell House and Robert Wise’s The Haunting (1963), not the least of which is the seemingly deliberate similarity of titles between the film and the Shirley Jackson novel The Haunting of Hill House (1959) from which The Haunting was taken. Both films feature a team of four – a parapsychologist and two mediums – conducting an investigation into a haunted house. Both eschew the standard clanking chains and headless ghosts and aim for more cerebral places. Both also owe something to the psychological ghosts of Henry James’s The Turn of the Screw (1898) and the suggestion that apparitions exists somewhere between the real, repression and what the ghostbusters want to believe.

The Legend of Hell House emerges far more strongly as a story than The Haunting did. Legendary genre screenwriter Richard Matheson has simplified his original book Hell House (1971). Primarily, Matheson pares down the book’s shock excesses, something that would have brought the film into the domain of The Exorcist (1973), which came out six months later the same year. (As a result, The Legend of Hell House comes out as a far more intelligent and subtly effective film than The Exorcist).

Most haunted house stories – The Haunting being a prime example – treat the agency behind the haunting as vague or as some melodrama from the past being replayed. Richard Matheson contrarily constructs a fascinating parapsychological detective story and heads into some interesting areas concerning the scientific study of the haunted house phenomena. The film even attempts to place a rigorous seal of authenticity on itself by including an opening statement from real-life psychic Tom Corbett: “Although the story of the film is fictitious, the events depicted involving psychic phenomena are not only very much within the bounds of possibility but could very well be true.”

Where The Legend of Hell House works particularly well is in the hands of director John Hough. British director Hough had emerged from tv’s The Avengers (1962-9) and previously directed Twins of Evil (1971), the third and best in Hammer’s Karnstein trilogy, and would go onto make a good deal of unremarkable Disney and B-budget horror fodder. (See below for John Hough’s other films).

The Legend of Hell House was the single best work that John Hough ever turned out. There is a certain tendency to rely on shock effect and the film never has any scenes as startling and effective as the famous door battering in The Haunting but Hough creates a tense and uneasy atmosphere from the outset. There is a wonderfully eerie scene where ectoplasm emerges from Pamela Franklin’s fingertips during a seance, the scene being all the more remarkable for the tone of scientific detachment taken throughout – Clive Revill commands the spectral force to leave a sample of ectoplasm in a jar and not too surprisingly it veers off and does so. Alan Hume’s photography – with shots reflected off rotating records and entire rooms seen in the curved reflection of a polished silver teapot – is marvellously stylish.

The cast is excellent. Roddy McDowall does another of the trembling, fearful cowards he specialised in, but emerges with unexpected strength to become the hero of the hour. Pamela Franklin, who was only a few years earlier the teenage love interest in The Prime of Miss Jean Brodie (1969), has a more grown-up role here (one of a number of genre appearances she made throughout the 1970s) and gives a mature, intelligent performance.