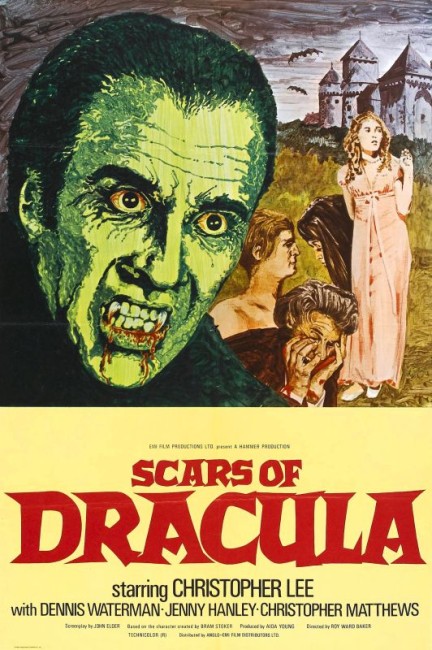 After being caught in bed with the burgomaster’s daughter, Paul Carlson flees by jumping into a nearby coach. This deposits him near Castle Dracula where he becomes Dracula’s latest victim. His brother Simon and Simon’s fiancee come searching for him and end up being drawn into the fight against Count Dracula.

Scars of Dracula proceeds at a tired and sedate pace as though nobody was much interested any more. Indeed, this is the last entry in the Hammer Dracula series made in the traditional sense – the subsequent films seem to be trying to inject some element of novelty such as bringing Dracula into the modern day or pitting him against kung fu. The budget seems stretched in trying to drum up the usual plush interiors and there is a very unconvincing bat on a wire effect. Christopher Lee lends his regal, magisterial presence without ever finding anything to do in the film.

The story does try to return somewhat to Bram Stoker with mysterious coach trips and with Dracula as courteous host with attendant bride – the film even takes the scene from the Stoker novel where Dracula is seen scaling a wall like a fly. However, the story never amounts to more than sundry runnings around the village and castle interspersed with random neck chompings. The story also seems dependent on an inordinate number of unattended coaches left waiting about for people to get inside them. There is also a much higher degree of sex and sadism than in any other entry in the series.