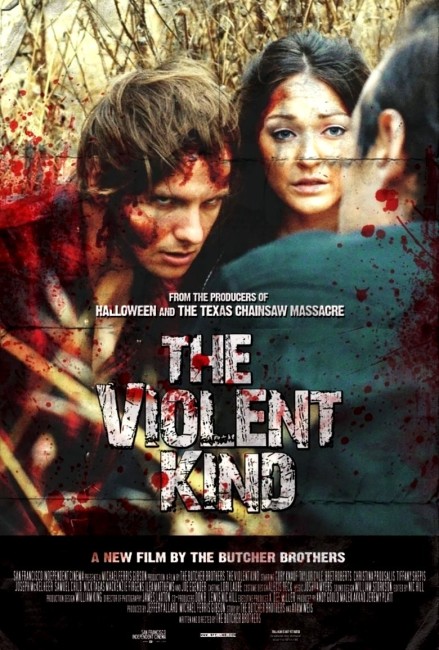 In Oakland, Cody is a member of the motorcycle gang The Crew along with his older brother O. They and their friend Elroy head up to the fiftieth birthday party being thrown by the boys’ mother Linda. After leaving to go home, one of the partygoers Michelle returns to the house in a deranged state, attacking people, badly wounding Elroy and has to be confined to the bed. They realise that she has become possessed. As a struggle ensues, the house is invaded and they are made prisoners by a group led by Vernon who call themselves The Violent Kind that appear to have stepped out of the 1950s.

The Violent Kind was the third film from The Butcher Brothers, who in real-life are the unrelated Mitchell Altieri and Phil Flores. The Butcher Brothers first appeared with the interesting suburban vampire film The Hamiltons (2006) and then went on to the remake of April Fool’s Day (2008) and The Hamiltons sequel The Thompsons (2012). Subsequently, Mitchell Altieri went solo to direct Holy Ghost People (2013), Raised by Wolves (2013), A Beginner’s Guide to Snuff (2016), The Night Watchmen (2017) and Star Light (2020).

The Violent Kind is a film that makes several not uninteresting changes of direction. If nothing else, it keeps you guessing what is going on. We start with the two brothers and their friend. We are told they are members of a tough biker gang and the opening credits is a montage against a selection of newspaper clippings that tell of the activities of The Crew, leading us to believe they are some mean hombres. Only when we meet them, Cory Knauf’s soft pretty boy looks resembles anything but a tough, seasoned biker. Bret Roberts looks more the part and the film at least introduces him having heated sex with his girlfriend and then engaged in a punch-up with another guy (James Hiser) outside the house.

Even when we get to the party venue, where we remain for the rest of the story, what is supposed to be a biker party seems very tame, no different to a regular party and lacking in the debauchery and drunkenness you usually associate with bikers. You wonder if maybe the Butcher Brothers are subverting type but are then reminded that the opening credits scenes go out of their way to tell us what a group of tough outlaws these bikers are.

Things take an upturn with the introduction of a possessed Tiffany Shepis. Shepis, who has become a regular Scream Queen since the early 2000s, goes for broke with her performance and the film gains a whole lot of furious, demented energy. The Butcher Brothers do not hold back in the blood and gore department either. The film goes through being a possession film for some time before it conducts an abrupt jumping of tracks to become something different. Tiffany Shepis is shuffled out of the main picture for some time, although reappears towards the end where she appears less possessed than made into a sacrificial victim.

The story then become about a group of people (the titular Violent Kind) who seem to have stepped out of the 1950s and hold the others in the house captive. One gets a distinct vibe here of the Stephen King adaptation Sometimes They Come Back (1991) with people being haunted by ghostly revenants of 1950s rockers. These scenes are boosted by a real live wire performance from Joe Egender as the gang leader. The film never particularly explains who or what these characters are, before ending with a ceremony involving a nude Tiffany Shepis and then the suggestion that the world is about to end and/or the skies are opening unleashing hordes of something (quite what is not at all clear).