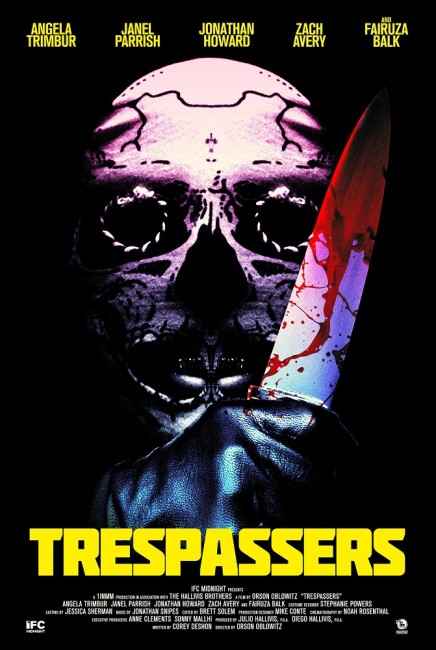 aka Hell is Where the Home Is

Husband and wife Joe and Sarah have rented a luxury home in the Mojave Desert for the weekend. They have invited Sarah’s friend Estelle and her boyfriend Victor. Sarah and Joe have been having problems in their marriage ever since she lost their child in a miscarriage. What Joe and Estelle are not telling their respective partners is that they slept together one night. Victor begins partying hard and consuming large quantities of cocaine. They are interrupted by a woman at the door who says she is a friend of the owners and asks to come in and use the phone to call for help. Victor becomes irritated with the woman there. This ends up in a scuffle where he accidentally causes the woman to fall and impale her eye socket on a crystal spike, killing her. As the others debate about what to do with the body, they are interrupted as police come to the door and then the house in invaded by masked criminals.

Trespassers, also known as Hell is Where the Home Is, was the second film from Orson Oblowitz. Oblowitz had been floating around the industry since the late 2000s, working as a cinematographer on documentaries and as a producer, before he made his directorial debut with the revenge film The Queen of Hollywood Boulevard (2017). He subsequently went on to make The Five Rules of Success (2020).

Trespassers falls into a certain type of thriller where people try to deal with a dead body only for things to rapidly spiral out of control and the situation keep getting worse. We have seen variations on the theme before in films like Shallow Grave (1994), Very Bad Things (1998) and The Rental (2020). The latter half of Trespassers turns into a Home Invasion Thriller as the surviving members of the group find themselves under attack by masked bandits.

I liked what Orson Oblowitz does with the film. He and screenwriter Corey Deshon bring out a series of characters interactions – Jonathan Howard who becomes dangerous and violent under the influence of drugs; his girlfriend Janel Parrish’s fears of his violence; Zach Avery and Angela Trimbur’s martial difficulties since her miscarriage; Janel and Zach not telling the others they slept together. All of these twist and play out as the film goes on. Jonathan Howard gives a particularly aggressive performance once the situation gets wound up and he starts wielding a gun.

Orson Oblowitz gets some particularly good jolts off – like the scuffle where Jonathan Howard tries to evict Fairuza Balk from the house that ends up with her falling and impaling her eye on a crystal spike. Once the house is invaded and the group are brutalised and start being killed, Oblowitz ratchets the tension up with quite savage and bloody effect.

On the other hand, I do have a problem with Corey Deshon’s fairly schematic script. The point that should be is that much of the middle of the script has the characters reacting to the two deaths that occur – Fairuza Balk falling onto the glass spike and Janel Parrish’s stabbing of Jonathan Howard – and trying to cover up the bodies to avoid arrest. HOWEVER, neither of these two deaths are ones that would have either person tried for murder. In both cases, there are witnesses. In Fairuza’s case, it could be reasonably demonstrated that it was an accident, while in the case of Howard being stabbed by Janel, it could very clearly be argued that she was defending herself from a violent attack and that she could more than justifiably argue self-defence.

The house where the action takes place incidentally is also the one where the bizarrely ridiculous revenge thriller Revenge (2017) was shot.