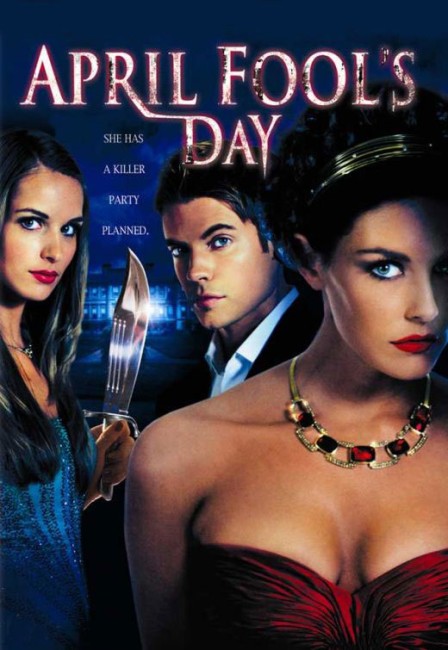 On April 1st, 2007, North Carolina socialite Desiree Cartier holds her annual debutantes’ ball – in this case to introduce Torrance Caldwell. Also invited to the ball is Desiree’s rival, the seemingly perfect Milan Hastings. Desiree’s playboy brother Blaine drags Milan away to have sex, which Desire and several others are secretly filming and planning to upload to the internet to humiliate her. However, someone has drugged Milan and she falls over the balcony to her death. One year later, Desiree, Blaine, Torrance and the three others who were present are invited to Milan’s graveside. There they are delivered a package that contains a video showing the killing of gossip columnist Charles Lansford who was present at the filming and subsequently exploited Milan’s death. They are told that each of them will be targeted until the party responsible for Milan’s death steps forward. Immediately after, a very much alive Milan appears to be coming after each of the group.

April Fool’s Day (1986) was an entry in the 1980s slasher movie fad. Halloween (1978) and Friday the 13th (1980) had created the template of the slasher movie between them and were followed by a great many copycat slasher films that all featured similar holiday titles. In choosing the title it did, April Fool’s Day was able to approach the slasher film in a lighter vein – although surprisingly, the film played itself straight for the greater part, apart from an ending that revealed everything to be an elaborately staged prank.

The April Fool’s Day remake comes from The Butcher Brothers, who are in actuality the directing duo of Mitchell Altieri and Phil Flores and are unrelated beyond their working name. The Butcher Brothers first appeared with the low-budgeted The Hamiltons (2006), which was a halfway reasonable horror film and clearly enough to net them the directorial assignment here.

As with the remake of Prom Night, April Fool’s Day 2008 has thrown out almost everything from the original bar the title and the general concept. The original takes place on a private island where a group of teens have been invited to a party by a wealthy friend over the titular holiday (although technically April Fool’s Day is not a holiday in the US). There is a party in the opening moments here but this has now become a debutante’s ball where an accidental death occurs. The rest of the plot then becomes a close variant on I Know What You Did Last Summer (1997) where those responsible for the death are stalked seemingly by the dead person come back to life. Both versions of April Fool’s Day end with a completely improbable twist that reveal the entire series of events and the murders throughout to have all been staged.

April Fool’s Day quickly worms its way down to become one of the worst of the modern horror remakes. As with many of these remakes, the film is peopled by young actors and actresses who have been selected for their good looks, with their ability to act being a consideration that lags some distance behind. April Fool’s Day typifies this far more than any of the other horror remakes. The pretty people have been placed at the forefront of the film and the Butcher Brothers launch into showing their bitcheries with relish – indeed, there are times it feels almost like we are in a slasher movie version of Melrose Place (1992-9).

However, the film’s tone leaves us uncertain whether we are supposed to be in awe/lust/idolising the cast because they are physically perfect specimens or hating them because they are such obnoxious individuals. It is hard to tell as the scenes seem directed without an appreciable irony. Indeed, we are placed in the odd position of finding the cast so unlikeable as characters, especially leads Taylor Cole and Josh Henderson, that we end up cheering the killer on when they start to be killed.

The only warm and normal person in the cast line-up is Scout Taylor-Compton who had just gone through the horror heroine/Final Girl thing in the remake of Halloween (2007) – although surprisingly does not inherit the same role here. The worst performance comes from Samuel Child, who was also in The Hamiltons, who appears so nervous and twitchy that it seems laughable to think of him holding the position of a respected politician.

Despite showing promise with The Hamiltons, The Butcher Brothers’ direction here is bland. They churn out a conveyor belt 00s teen horror film where everything seems polished and delivered by automatic. Despite its R rating, there is a conspicuous lack of suspense, gore or even gratuitous nudity, making April Fool’s Day one of the tamest entries in this modern slasher fad.

Although the worst part about the film is the twist ending, which collapses into utter preposterousness once the set-up is revealed. Oddly this proves to be a complete reversal of the twist in the original – where the original had this a set-up conducted by the heroine who was attempting a test run for a novelty holiday package, here the film turns it around and has it a set-up that everyone else is playing back on the heroine to expose her guilt.