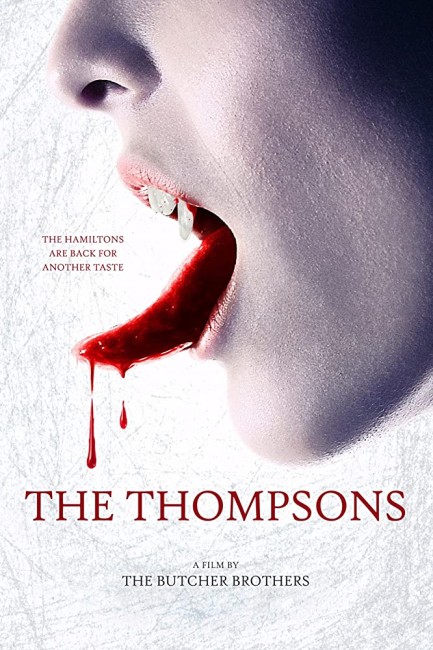 The vampire family known as the Hamiltons have fled the USA after being listed as wanted fugitives following a slaughter in a desert diner that was captured on security camera. Now calling themselves The Thompsons, they are in hiding in Europe. There they are engaged in a search for others of their kind in the hope of finding a cure for Lenny, the youngest member of the family. Francis follows a lead that takes him to the English village of Ludlow but is captured by The Stuarts, another family of vampires. They release him, asking him to bring the rest of his family to them for help – only for Francis to realise too late that this is intended as a trap.

The Hamiltons (2006) was an interestingly offbeat effort that concerned itself with a strange family where the twist ending eventually revealed that they were a household of vampires. The film enjoyed some fantastic festival play and good word of mouth. It was a directorial debut film for the duo that bill themselves as The Butcher Brothers, who in real-life are the unrelated Mitchell Altieri and Phil Flores. The Hamiltons enjoyed enough success for The Butcher Brothers to net the assignment of the remake of April Fool’s Day (2008), followed by The Violent Kind (2010). Mitchell Altieri also went solo to direct Holy Ghost People (2013), Raised by Wolves (2013), A Beginner’s Guide to Snuff (2016), The Night Watchmen (2017) and Star Light (2020).

The Thompsons is a sequel to The Hamiltons where The Butcher Brothers have reunited all four of the actors who played the family members. Cory Knauf, the youngest family member, also co-writes the screenplay this time (and naturally his character carries the lion’s share of the story, while the other three returning characters are sidelined to essentially supporting parts). The Butcher Brothers have also taken the opportunity of a slightly larger budget to relocate the sequel to England for the bulk of its running time.

I didn’t think The Hamiltons was that great a film. It did however have something unusual to it that made you wonder what was going on in the house, it was reasonably well played by its cast and came with a certain perverse kick. Alas, all that made The Hamiltons interesting is missing when it comes to The Thompsons. The film starts reasonably well with Cory Knauf searching the countryside for his kind, coming to a typical smalltown English pub and then abruptly taking everyone there hostage at gunpoint, before this is overturned in unexpected ways.

It soon becomes apparent that the story the film has chosen to tell is a very different one than uncovering the secrets of the weird family we saw The Hamiltons. Three of the four family members are sidelined in different cities and the film only occasionally concerns itself to return to what they are up to. The Butcher Brothers do deliver a gore-filled flashback to a massacre at a desert diner but this only looks like a low-rent version of the much more stylish bar scene in Near Dark (1987).

In placing the emphasis on the conflict with the rival family, all that the sequel slips into is being another vampire film of tired poses. TV’s True Blood (2008-14) did everything that The Thompsons does with far greater conceptual rigour and depth – by comparison, all that this aims for is a sophistication that is only surface deep. We end up with a film with tired and uninteresting conflicts, where nothing interesting happens and where the script fails to provide twists of any worth. As a film, The Thompsons simply fails to add anything to such an over mined genre as the vampire film.