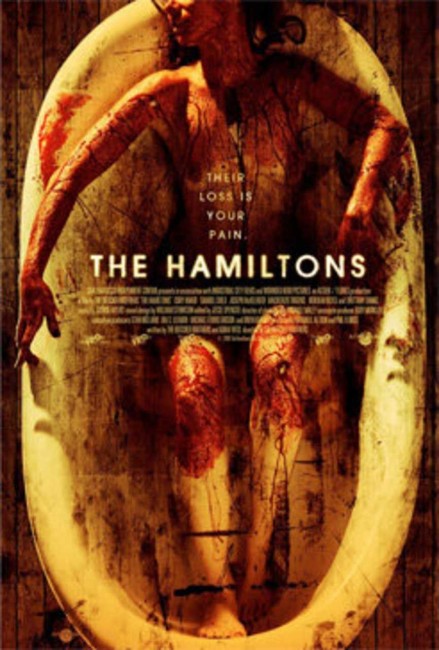 After the death of the parents, the four Hamilton children try to carry on and keep the family together. The teenage Francis, the youngest of the group, decides to make a video diary about the family with his camcorder for a class project. Francis also feels troubled by many of the things the family do, including keeping two girls that Wendell has abducted imprisoned in the cellar. Francis starts to befriend one of the girls, despite Wendell’s threats and beatings after finding him down there.

The Hamiltons is an interestingly odd film from a duo of filmmakers who bill themselves as The Butcher Brothers. The Butcher Brothers are in reality Mitchell Altieri and Phil Flores who are not in actuality brothers, nor in any way related. Only Altieri had directed a full-length film prior to The Hamiltons with the mumblecore effort Living in Suburbia (2006).

The Hamiltons starts interestingly strangely. You are not sure where it is going on. The film moves from wistful elegiac narration that comes in a teenage voiceover from Cory Knauf talking about the death of their parents and the efforts of the rest of them to maintain a semblance of family life to in the next scene showing the two girls chained up in the cellar. The effect is decidedly disorienting – which is exactly what the Butcher Brothers intend. From this, The Hamiltons seems to be shaping up to be some weird mix of Party of Five (1994-2000) and The Texas Chain Saw Massacre (1974).

Both The Butcher Brothers and the actors do a good job of subtly revealing the characters’ various secrets – Samuel Child’s picking up gay men; Mackenzie Firgens inviting her friend Jena Hunt back for a sleepover and then engaging in incestual kisses with Joseph McKelheer; young Cory Knauf secretly befriending the imprisoned Rebekah Hoyle. The main complaint might be that The Butcher Brothers never quite let it pay off.

They direct in a calm mannered way that tends to the bland. At most the film hovers around some mildly perverse scenes with Mackenzie Firgens and Jena Hunt engaging in the game of Truth or Dare and some torture scenes, but the Butcher Brothers never push the horror aspect for anything other than an end conceptual unveiling. There is a monster of sorts revealed in the basement at the end but this feels like a forced attempt to throw in something visceral before the show finishes.

You can see the end coming from about the halfway point, nevertheless the Butcher Brothers lead up to it effectively. [PLOT SPOILERS]. The result turns The Hamiltons into perhaps the first conceptual vampire film. One where the filmmakers have conducted an interesting trick in playing into the scenes of normality and the victims imprisoned in the cellar before a big M. Night Shyamalan-esque eleventh hour twist to reveal that the family are vampires. It works with modest effect, although the lack of squirm-inducing horror and big shock effect earned a certain amount of negative attention from genre commentators.

The Butcher Brothers made a sequel to The Hamiltons with The Thompsons (2012), featuring most of the principal cast here. They subsequently signed on to direct the remake of April Fool’s Day (2008) and the original horror film The Violent Kind (2010). Mitchell Altieri went solo to direct Holy Ghost People (2013), Raised by Wolves (2013), A Beginner’s Guide to Snuff (2016), The Night Watchmen (2017) and Star Light (2020).