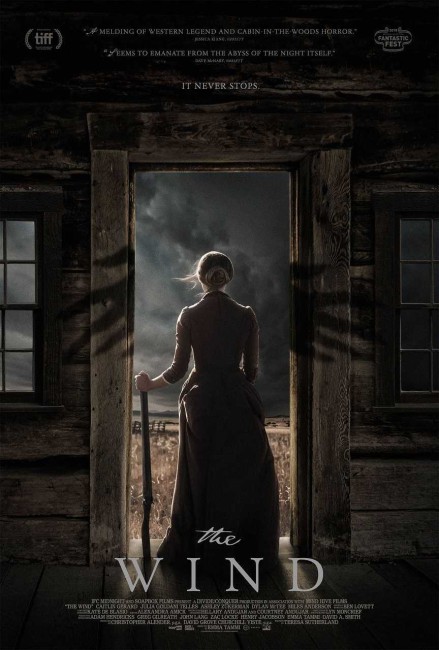 The mid-19th Century on the American Frontier. Lizzy Macklin is a German immigrant who lives with her husband Isaac on a farm in the prairies remote from any town. Another couple, Gideon and Emma Harper, move into another cabin a mile from their farm. Lizzy is called to tend to Emma whose mind is wandering and may be imagining that she is pregnant. Emma then kills herself. Left home as Isaac has to travel away for two days, Lizzy’s mental state starts to wander. As it does, the cabin is beset by wolves, the ghost of Emma and demons that live on the prairies, which may or may not all be in Lizzy’s mind

The Wind is immediately a film about isolation. The locale is a single cabin in the midst of a bare prairie plain sometime during the Pioneer Era. The outdoors is seen in terms of wide open spaces – shots with characters standing on the edges of the frame and bare empty space between them. The neighbouring cabin can only be seen as a distant light on the horizon. The whole film moves between this external agoraphobia and an internal paranoia with Caitlin Gerard inside the cabin. The soundtrack goes from quietly observed dialogue in the outdoors to the inside of the cabin where even the wind becomes a menacing presence on the soundtrack and Caitlin is subject to a terrifying battering at the door by the wolves outside.

The film also comes with a deliberately non-linear plot. It becomes a puzzle as we try to work out what order events are meant to be transpiring in. Gradually, Emma Tammi draws us into a subtly ambiguous mystery along the lines of works like The Innocents (1961), Repulsion (1965), Hour of the Wolf (1968), The Shining (1980) and Lovely Molly (2011). We are not entirely sure if Caitlin Gerard is seeing the ghost of Julia Goldani Telles and people turn into demon figures or she is imagining everything.

The film flips between outré moments – where preacher Miles Anderson turns around with black eyes and his shadow transforms into a writhing tentacular thing, or the return of husband Ashley Zukerman at the end – and others that suggests all of this is mental illness. The film reaches a bleak ending with Caitlin Gerard symbolically abandoned in the middle of the plain with only her book about prairie demons, suggesting that everything that has happened was all in her head. But the approach of the film is such that you are not entirely sure and working out what is going on becomes a guessing game throughout. This is not always an easy and accessible film but one that works with considerable intelligence.

The film is aided immensely by Caitlin Gerard who I had previously only seen as a generic teen actress in works like Smiley (2012) and Insidious: The Last Key (2018). She gives the film a strong intelligent performance and proves she has matured into an actor well worth paying attention to in the future.