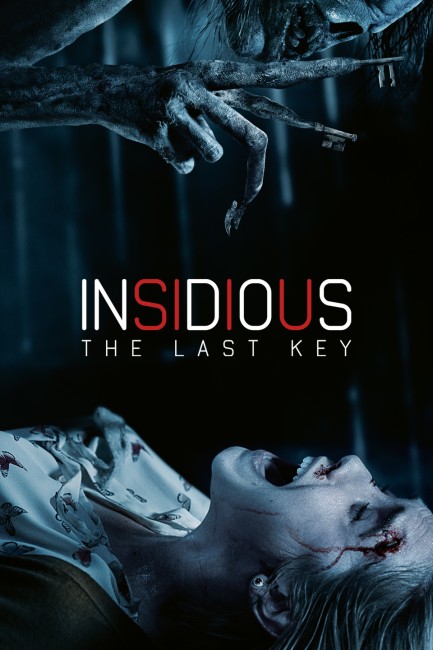 New Mexico, 1953. Young Elise Rainier lives with an abusive father who beats her over her refusal to deny that she can see ghosts. One of these ghosts implores her to open the red doorway into the beyond, only for a demonic entity to emerges and kill Elise’s mother. In 2010, Elise gets a call for help from Ted Garza and realises that he lives in her old family home. She, Tucker and Specs set out to conduct an investigation. Doing so means Elise having to reconnect with her estranged brother Christian, whose daughter Imogen has the abilities that Elise does, and to find a way to stop the evil presence that remains inside the house.

Insidious: The Last Key is the fourth of the films that began with James Wan’s Insidious (2010). The original proved a more than reasonable box-office hit and was followed by Insidious Chapter 2 (2013) and the prequel Insidious Chapter 3 (2015). James Wan directs the first two films and acts as producer on the others. All four films are written by Leigh Whannell who also plays the nerdish Specs, and directed the third film. With The Last Key, Wan and Whannell have handed over direction of the film to Adam Robitel, an American director who previously made the Found Footage possession film The Taking of Deborah Logan (2014) and subsequently went on to make Escape Room (2019).

The Last Key would appear to take place after Insidious Chapter 3 but before the first two films – we saw the ghostbusting team being formed in the previous film and this ends with Elise answering the phone and agreeing to help the Daltons. In many senses, this film has been set up to give an origin story for Elise and the characters. We have scenes and flashbacks set in 1953 and explaining Elise’s childhood and the opening of the doorway to unleash the demonic figures, plus other scenes explaining how Specs and Tucker adopted their Mormon look in white shirts and black ties. Whannell also takes the opportunity to write more substantial roles for he and Angus Sampson, giving both characters a sense of humour, mostly based on their awkward efforts to chat up Elise’s nieces and with Whannell allowing Specs to get the girl at the end. The difficulty I had with much of this is that while I enjoyed the first couple of films, the series feels too slight to leave one caring about whether I wanted to see an origin story for these characters.

After two strong initial entries, the Insidious series had started to slip into the run of the mill with the third film. The Last Key does little to reverse the downward trend. For one, Leigh Whannell seems to have delivered the script on autopilot. Beyond the origin story pieces, the menace is generic – more ventures into The Further, vague mumblings about the Red Door, people imprisoned in the house, demonic forces influencing the residents of the house and forcing them to keep people prisoner for no clear reason. You reach the end of the film and not much of it slots into a coherent rationale so much as the shuffling of a set of plot elements like a deck of cards. The story is so vague it is not even clear what the significance of last key of the title is.

The other negative point is that Adam Robitel represents a major comedown in directorial style from James Wan or even Leigh Whannell’s lesser efforts in Insidious Chapter 3. Robitel trades in annoying jumpshocks that come without any finesse or sophistication – a ghost arm reaching out to grab Lin Shaye around the throat; the imprisoned girl in the hidden room abruptly appearing and shouting in Shaye’s ear; an arm popping up out of a suitcase. This is especially evident in a scene where a ghost appears to Lin Shaye behind detective Marcus Henderson during her interrogation at the police station – an entire scene that exists for no other reason than to provide a contrived pop-up jump. Much of this can also be laid at the door of the decision to make The Last Key the first of the Insidious series to be shot in 3D.