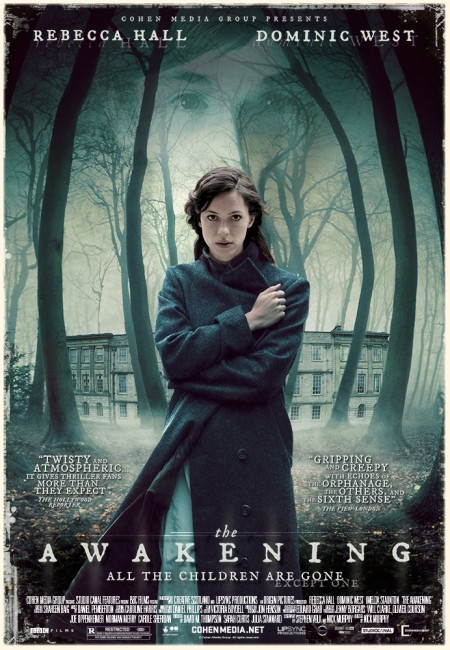 London, 1921. Florence Cathcart has written a book ‘Seeing Through Ghosts’, which debunks the existence of ghosts. She works with the police, exposing fraudulent mediums. She then receives a visit from Robert Mallory, a teacher at the Rookford boys’ boarding school in Cumbria. He begs her to investigate the reports of the ghost of a boy at the house, who always manages to mysteriously appear in the school photo, and has now seemingly caused the death of another boy. Florence agrees to travel to Rookford to conduct an investigation. She reveals the activities to be a mundane prank played by the boys and one of the masters. However, as the boys depart for the holidays, Florence is not so sure of her initial assessment and decides to stay on to investigate further. Incidents occur, leading her to believe that the school may be genuinely haunted. As the hauntings become more sinister and personal in nature, everything is not as clear as it appears to be.

The Awakening – no relation to the Charlton Heston mummy film The Awakening (1980) and some twenty other films with a similar title – is a ghost story that has garnered a reasonable degree of acclaim. It was a debut feature for British director Nick Murphy, who was previously a director of documentaries and episodes of documentary series for the BBC and subsequently made the crime film Blood (2012) and the tv mini-series adaptation of A Christmas Carol (2019). His co-writer is Stephen Volk, a British writer who has delivered a number of genre scripts with the likes of Gothic (1986), The Kiss (1988), The Guardian (1990), Ghostwatch (1992), Superstition (2001) and Octane (2003), as well as created the tv series Afterlife (2005-6) and the mini-series Midwinter of the Spirit (2015).

The Awakening is a ghost story in the classic British tradition, using the genre’s preference for Victorian and Edwardian settings. This is something that was also tapped by The Woman in Black (2012) around the same time with disappointing results. Indeed, The Awakening promptly proves to have more in the way of finely crafted atmosphere within its first few moments than there was in all of The Woman in Black.

The film opens on what would appear to be a spiritualist seance, which Nick Murphy delivers with undeniably haunted effect, before the film abruptly throws everything on its head and exposes this as a fake medium act. This pushes The Awakening into a certain story arc that has been employed by a number of other haunted house/paranormal investigator films of recent – 1408 (2007), The Reaping (2007), Book of Blood (2009), Grave Encounters (2011) and Red Lights (2012) – wherein an investigator comes up against real phenomena that challenges their scepticism.

The Awakening is a beautifully made film. The photography has been washed out to muted tones and there are some exquisite exteriors of old British houses. Nick Murphy knows how to do the ghost story effect well and there are constant spooky images of feet and shadowy figures appearing in the corner of the frame, and one eerie effect where the cigarette case that Rebecca Hall dropped in the river appears out of her pillowcase.

One of the most haunted scenes is the one where Rebecca Hall finds the miniature house where each of the rooms has tableaux of scenes that have happened throughout the school with the last one being a likeness of her bent over the model with the figure of a boy halfway across the room behind her, whereupon she turns to look around … Like all classic ghost stories, there is an underlying theme about the psychological relationship between the haunting and the living. In this case, the film has a strong and well-written series of themes that run throughout about fear, loneliness and the guilts of the past.

Perhaps the least satisfying section of the film is when it feels the need to have to throw in a M. Night Shyamalan-esque conceptual spin on everything that has happened. [PLOT SPOILERS] There is the striking scene where a puzzled Dominic West turns to Rebecca Hall and says “Florence, there are no children here. There’s only us three,” which turns the entire film on its head. From this point, The Awakening almost becomes a film that has more in common with something like Atonement (2007) than it does a more traditional ghost story like The Woman in Black.

[PLOT SPOILERS CONTINUED] However, this becomes increasingly more contrived, requiring a twist that asks us to believe that the very school that Rebecca Hall is asked to investigate also turns out to be the same house where she grew up and where her father’s murder of her mother somehow had a traumatic effect that caused her to blank out all memory of her childhood identity and home, as well as the fact that Imelda Staunton was her nanny. Moreover, this also requires that she, despite being a professional sceptic, has an ability to see dead people without realising that they are not alive.

This is the type of twist ending that was offered up by a host of films that came out after The Sixth Sense (1999) and The Others (2001) – although, if anything, the twist is one that reminds of the other British haunted house film Haunted (1995). These copycat film each seemed to be in a competition to outdo the increasingly improbable conceptual twists of the other. (See Films Featuring Conceptual Reversal Twists). This goes so far out beyond the realms of probability in stretching coincidence that it causes the cleverness of the rest of the film to collapse.

Rebecca Hall is a strong and highly promising British actress who has been rising in terms of an international profile in the last few years. The part she has here is one that allows her to play with strong, intellectual strength. The only complaint might be that Hall’s character seems too much of a modern woman and has a prominent position – commanding units of police officers – than would have been credible for the film’s stated 1921 period. You have to remember that the film’s setting is at a time when women had not even been given the vote (which did not happen in the UK until 1928).