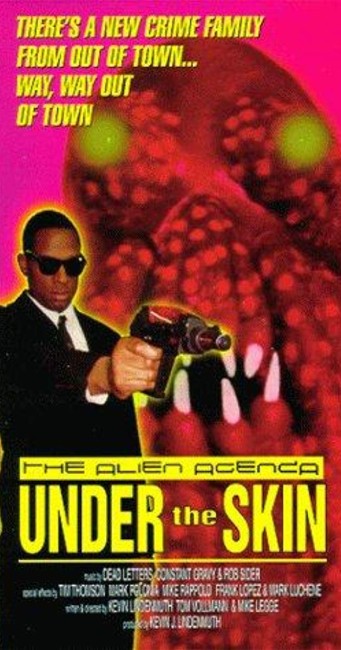 The Guys in Black

The Guys in Black:- A biologist is abducted by two Men in Black and taken to Puerto Rico where he is sent out into the jungle unarmed and told to trap one of the Chupacabra beasts that attacks animals. Unsavory Characters:- A petty Chicago hood is on the run, sought by both the mob and cops as a new crime organization moves into town. He then discovers that the new organization is from way beyond the Earth.

Under the Skin was the third of the Alien Agenda films produced by Kevin J. Lindenmuth and his Brimstone Productions. The Alien Agenda series is one in which Kevin Lindenmuth has invited various directors to contribute short films to a series, which are collected under the loose overarching concept of an alien invasion.

The first of the Alien Agenda films The Alien Agenda: Out of the Darkness (1996), although it was more horror than science-fiction, had a genuinely weird atmosphere. The second entry The Alien Agenda: Endangered Species (1997), while variable in quality, had a couple of fine individual segments. However, Under the Skin is a more variable prospect.

Kevin J. Lindemuth contributes the The Guys in Black segment, which frames the other story, although the substance of the piece takes places later in the show. It features a scientist who is abducted by the Men in Black and taken to a secret base in Puerto Rico where he is forced to capture a Chupacabra single-handed and unarmed. Here the film seems on the verge of building to a singularly fascinating premise – but at that point it abruptly cuts off, drops any confrontation with the Chupacabra and turns to some other unsatisfactory business about the scientist encountering a double that has been left in his place. Maybe the budget to do a full-fledged monster fight or create pseudo-jungle locations was beyond Kevin Lindenmuth. If this had not been the case and with Kevin Lindenmuth’s characteristic for putting unique conceptual spins on classic themes, this segment could have been a fascinating variation on something like Predator (1987).

Unsavory Characters, directed by Tom Vollmann, is equally unsatisfying, although for completely the opposite reasons. Where you wish The Guys in Black had taken more time to tell its story, you wish Unsavory Characters had taken less time. For the most part, it is less a science-fiction film than a low-budget mobster drama about a petty hood caught between warring gangland factions. One can see the twist ending coming way in advance and without it the segment would not be a science-fiction film at all. The segment is overly long and dully directed and the various subplots never engage. The segment does feature a minor cameo from Edward D. Wood Jr regular Conrad Brooks as a mob head.