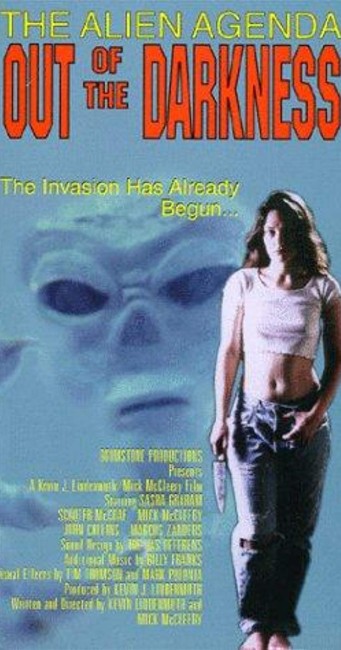 In the year 2030, Earth has been devastated by an alien invasion. One survivor lives in an abandoned house where he has discovered alien technology that allows him to view the past. Limited Vision:- In 1985, a drifter picks up a hitch-hiker on the way to Atlantic City. However, the man holds a secret – that he is wanted for the police for slaughtering his entire family. Worm:- Becky, a schizophrenic teenage runaway, befriends and is granted shelter by the strange Sam who has a predilection for feasting upon human flesh and insists that he is not human. He then starts insisting that she can change over and become one of his kind too.

Out of the Darkness was the first of the Alien Agenda trilogy. Low-budget director Kevin J. Lindenmuth, who made the worthwhile low-budget likes of Vampires and Other Stereotypes (1994) and Addicted to Murder (1995), created a loose format that allowed him to bring together short films made by a variety of directors, using the umbrella concept of an alien invasion. The framework is a decidedly loose one – the film strains to make the uniting segments with Lindenmuth regular Mick McCleery viewing the past using an alien device work for it. Each piece however works as a self-contained story – in truth, the stories are more horror stories than they are science-fiction – and it was not until the next entry in the series that Kevin Lindenmuth got around to creating a grand schema to connect it all up.

Nevertheless, the two episodes here are excellent. Mick McCleery, a regular actor in Kevin Lindenmuth’s films, directs the first episode, which seems like a bizarre combination of The Fugitive (1963-7) and an episode of The X Files (1993-2002, 2016-8) with a doctor on the run from the killing of his family. Both the stories in this film create a unique atmosphere by withholding information from us about what is going on. This is more problematic in Limited Vision as we are not sure what is going on in the flashbacks accorded us – the video cover says that the doctor’s family was killed by an alien double, although this is not something you understand from the information given in the episode. Nor is the significance of the severed ear made clear. Nevertheless, the characters are nicely drawn and the dialogue terse. The episode attains a nice mood of strangeness, particularly the ending coda as the doctor aids a man fixing his tire, casually asking “Can I hold that [the tire iron] for you?”

The best segment is Kevin Lindenmuth’s contribution Worm. Like Limited Vision, it operates on the principle of creating a mystery and withholding explanation of what is happening from the audience. This works much more effectively here than it does in Mick McCleery’s segment. The episode closely mirrors the same narrative as in Lindenmuth’s vampire film Addicted to Murder – of someone becoming involved with a person who proves to be non-human and keeps insisting that they cross over to the other side to join them (something that involves considerable bloodshed) and offers only tantalizingly enigmatic clues but fails to explain any of the human one’s questions. Here Lindenmuth creates a fascinatingly weird atmosphere. There are some unsettlingly nonchalant exchanges:– “Whose arm is that?” “His – he grew a new one back,” and a couple of moments later:– “What if I don’t get rid of it [the arm]?” “Come on – one of me running around is enough, isn’t it?” Scooter McCrae, a low-budget horror director himself with Shatter Dead (1994), gives an imperturbably perky performance. There is something about this episode that exudes a fascinating aura that stays in the back of your head.