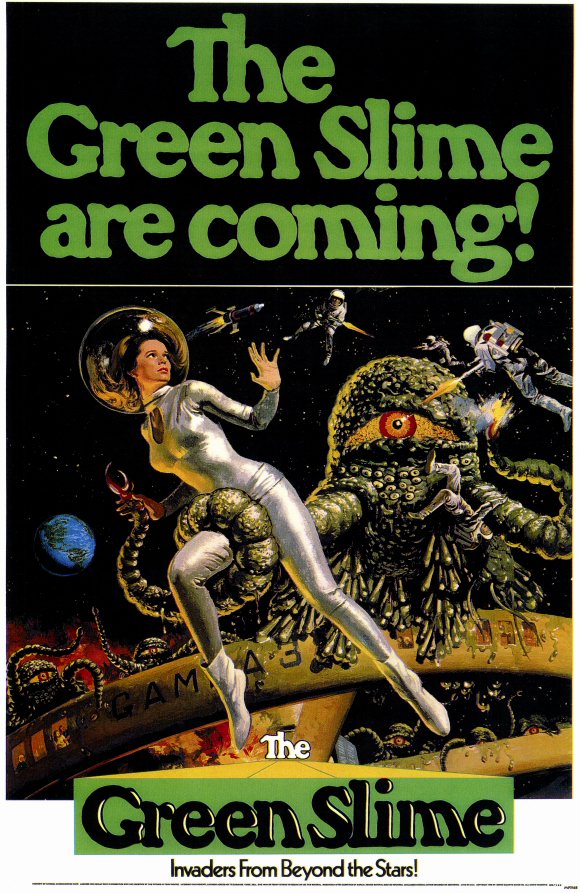 The UNSC detects an asteroid on a collision course with Earth. Commander Jack Rankin is recruited to head a mission to land on the asteroid and plant rockets to redirect its path. The mission goes successfully. While they are there, one of the team unwittingly pick up some green slime on their suit. Back aboard the station, the slime grows into a large tentacular creature. It is driven by a need to absorb energy and kills everybody in its path. However, all attempts to stop the creature only cause it to start replicating.

The Green Slime is one of the films that, alongside It! The Terror from Beyond Space (1958), Planet of the Vampires (1965), Queen of Blood (1966) and several others, formed not so much the widely quoted inspiration for as an entire genre that Alien (1979) drew upon – that of the shipboard siege against an alien force.

The Green Slime was a Japanese-American co-production. This provides the film with an oddly international flavour – it is shot in English and attempts to give the impression of a United Nations in space, although this does features some peculiarities, such as the entire cast having English names irrespective of their ethnicity.

Most genre reviewers consider The Green Slime to be a classic turkey, although it should be said that this is usually by those who have little taste for B-movies. As such, The Green Slime is a passable effort – no more, no less. The science-fiction content is generic. The characters are clichés – the scientist who pursues the quest for knowledge in disregard of the potential danger; the heroine fought over by two men where the triangle is solved by one of the men sacrificing his life. Robert Horton makes an imposingly noble but entirely wooden lead.

The sets are decent and the model effects are good for the period. Unfortunately, the monster’s squat lumpy shape with waving tentacles looks ridiculously cheesy. It is all directed with a certain energetic vigour that at least keeps the action moving. The film should at least get full marks for a great exploitation title.

Director Kinji Fukasaku was a prolific director of Japanese B-budget films. He has made a great many Yakuza films and several other ventures into genre material, including the space opera Message from Space (1978), the end of the world film Virus (1980), the samurai/horror film Samurai Reincarnation (1981), the martial arts fantasy Legend of the Eight Samurai (1983), the kaidan eiga Crest of Betrayal (1994), and the ultra-violent Battle Royale (2000) and its sequel Battle Royale II: Requiem (2003).

The even more interesting name on the credits is that of William Finger aka Bill Finger who for many years was the unacknowledged co-creator of Batman who had all of his credit stolen by Bob Kane. (See the documentary Batman & Bill (2017) for the full Bill Finger story). Around this time, Finger also had a number of credits as a screenwriter, including writing episodes of tv’s Batman (1966-8) and the SF films Snow Devils (1967) and Track of the Moon Beast (1976).