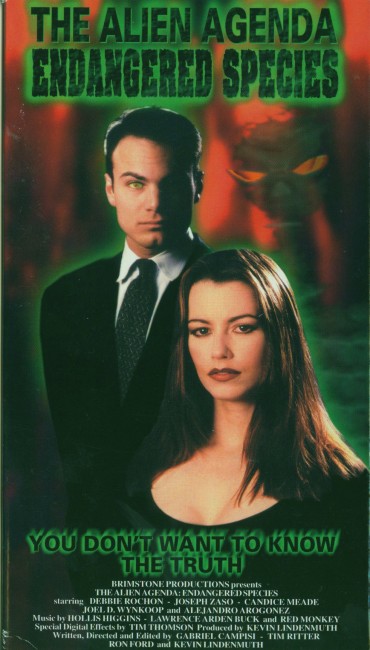 The Birthright:- Megan Cross, an investigative journalist conducting an expose on UFOs, discovers that her boyfriend is an alien shapechanger and that she is pregnant by him. He explains how his people tried to colonize Earth’s far-flung future but found it inhospitable. At war with another alien species The Grays, they traveled back to the past and decided to blend in with humanity. She kills him and joins an anti-alien underground resistance. The Law:- The underground is contacted by an operative Fritz Coligan who has just emerged in Las Vegas after five years disappearance. Hot on his trail come two alien men in black. Ransom:- Mercenary Cope Ransom is hired to go into Florida, now an atomic wasteland filled with mutant and crazies, and report back on a UFO that has crashed there. The Complex:- A fellow operative accuses Megan of being an alien double agent and pursues her through the building to kill her.

Endangered Species was the second of the Alien Agenda films produced by low-budget filmmaker Kevin J. Lindenmuth and his production company Brimstone Productions. With these films, Kevin Lindenmuth had the novelty of conducting a series where the films are an anthology of short films by various directors, brought together under the loose umbrella of an alien invasion premise. Lindenmuth has since created a series of other science-fiction and horror releases that similarly package together other short films.

In the other entries, The Alien Agenda: Out of the Darkness (1996) and The Alien Agenda: Under the Skin (1997), the overall structure is little more than a premise to unite shorts in which each director had fairly much gone in their own direction. Here for example, The Law was a short that had been made five years before Endangered Species was released. In the opening piece Birthright and the final segment Complex, Kevin Lindenmuth has set out to create an overarching concept to unite everything together – an ingenious and conceptually ambitious series of ideas involving alien invasion and time travel from far futures. Both of these segments work well – the first conjures an effectively paranoid mood, although is ultimately on the slight side, while the last segment contains an effective tension and a good end twist.

As with any anthology, the segments vary in quality. Here The Law from filmmaker Gabriel Campisi, is the weakest segment of the entire series. A good deal of the segment consists of the hero being chased by two alien Men in Black. However, the pedestrian pursuit through Las Vegas and the car chases are directed without any excitement or suspense, as though the camera had just been randomly placed and whatever happened filmed without any concern for dramatic framing. The actors are completely flat and the dialogue stilted. Even worse the two Men in Black are laughably unconvincing – they seem less mysterious than they do like someone had put a high-school kid and a dumpy short guy in an ill-fitting hat, suits and shades. The segment is raised somewhat at the end by some cute mini UFO effects and some lethal-looking syringe-wielding robots.

The best segment is Ransom. It is an effective attempt to copy the likes of Escape from New York (1981) and Stalker (1979) with a bounty hunter venturing into an alien forbidden zone (even if Joel D. Wynkoop’s bounty hunter suggests more of a university role-playing geek on a three-day drinking bender than a weather-beaten, worldweary tough guy). The sequence effectively manages to create images of a post-holocaust Florida by shooting around deserted gas stations and wrecked vehicles and even stages an effective giant mutant alligator attack. Director Tim Ritter – Truth or Dare (1986), Wicked Games (1994), Creep (1995) – crafts the episode with an effectively cynical, downbeaten edge. The best scenes are those with Joel D. Wynkoop being tortured by the Man in Black, which Ken Blanck plays with a totally gonzo nuttiness where you never know what is going to happen next.