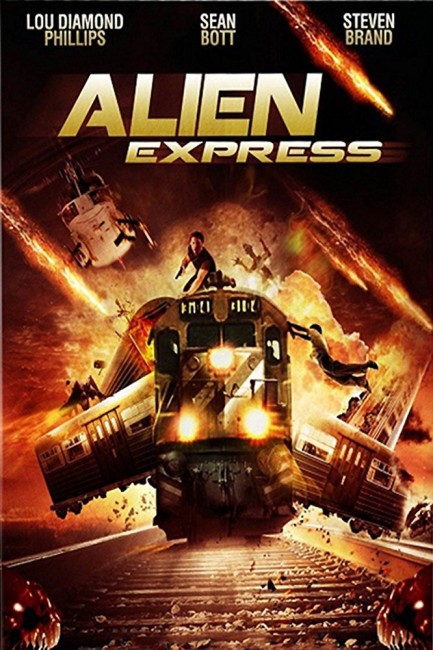 While on a campaign trail where he is widely tipped to win the presidency, Senator Frank Rawlings is passing through Utah on his way to Las Vegas in a special custom-designed luxury train. Just as the train passes a crossing, a meteorite comes down beside the train and incinerates a couple inside a car. State trooper Vic Holden arrives on the scene and finds a number of strange things, including green slime all around and a dead engineer who has been devoured underneath the train. Rawlings goes over Vic’s head and demands the train be allowed to continue on its way. Believing that something is wrong aboard the train, Vic defies orders to go after it, boarding by helicopter. Meanwhile, one of the porters turns out to be a suicide bomber who threatens to detonate his bomb unless Rawlings backs down on his stated intention to mine Alaska. At the same time, an alien force has emerged from the meteorite and invaded the train, killing the driver. Vic realises that the train is now a runaway – and that it is on a collision course with a slower-moving train full of nuclear waste. As he and the other passengers race to stop the train and defuse the bomber, they are picked off by alien creatures that move at high speed. Moreover, the alien creatures are rapidly breeding.

Just a year after Alien Express/Dead Rail was made, there came Snakes on a Plane (2006). Snakes on a Plane was purportedly conceived by writers over a few drinks who thought up some of the most absurd premises they could for a film and were surprised when the idea sold. Snakes on a Plane was at least conceived deliberately tongue-in-cheek. Although, surely none of the pitches that the writers dreamed up over drinks was as out there as some of the conceptual concatenations that writers have managed to come up with without chemical influence (at least as far as one is aware). Look no further than some of the Turbulence sequels – like Turbulence 2: Fear of Flying (2000), which mixed together a planeful of people trying to get over fear of flying, terrorists and a shipment of chemical weapons, or Turbulence 3: Heavy Metal (2001), which had Satanists hijacking a plane aboard which a Marilyn Manson-lookalike was performing a rock concert. Not to mention Tail Sting (2002) with giant mutant scorpions loose aboard a plane, both Flight of the Living Dead: Outbreak on a Plane (2007) and Quarantine 2: Terminal (2011) with zombies on a plane, Swarm (2007) about ants on a plane, Silent Venom (2009) about snakes on a submarine, Howl (2015) with a werewolf on a train, Lost in the Pacific (2016) about mutant cats on a plane and Train to Busan (2016) with zombies on a train.

Conceiving the bizarre mix of elements in Alien Express would surely have had to go beyond a few drinks and into something more akin to a serious alcohol problem. The film throws together the standard aliens lurking in the dark plot patented by Alien (1979) with the trainboard disaster film a la The Silver Streak (1976), The Cassandra Crossing (1976) and the undisputed classic of the genre Runaway Train (1985). (The aliens aboard a train concept was first done by the Spanish Horror Express (1972), which does a much more entertaining job of melding genre elements than Alien Express does). Although, not satisfied with its far-fetched premise, Alien Express keeps piling on increasingly improbable and absurd twists – a hi-tech luxury train; the contender for the next presidency aboard; a suicide bomber threatening to detonate; not to mention that the train is on a collision course with a freight train carrying a load of nuclear waste that could contaminate the entire state, either that or it faces detouring down a line where the bridge has collapsed.

There are numerous pieces of hilariously bad writing. Lou Diamond Phillips’ motivation to jump into action is entertainingly preposterous – the meteorite crashes and two people are incinerated inside a car, as well as an engineer found devoured beneath the train, although rather than stay and investigate the scene, Phillips (even though he has not determined or even suspects any kind of cause) gets into combat gear, straps on a small armoury of weapons and persuades his friend to take up his helicopter and pursue the train and let Lou drop down onto it from a rope ladder – not before taking the time to punch out his police captain for protesting that this might not be a sensible decision.

While Alien Express could have gotten by as an entertainingly silly disaster/alien movie, what does it in is the evident cheapness of the production. The creature effects vary between the extremely cut-price and the occasionally effective – certainly, the concept of aliens that move in a high-speed blur is a nifty one. Most of the train shots have an artificiality that look as though they have been created digitally, rather than using real trains or models. Some sequences such as where Lou Diamond Phillips drops from the helicopter onto the train would have looked much better had the film had the budget to do things properly – as it is, all that we get are obvious scenes of a digital helicopter hovering over a train and then medium angles of Lou Diamond Phillips (or stunt people) dropping from off-screen onto a surface that is supposed to represent the top of a train.

There is no conviction whatsoever to the climactic scenes with Lou Diamond Phillips and Joseph Hamilton climbing along the train roof while being attacked by aliens, as the roof set looks like no more than a surface against a black screen, without even the effort made to back-project scenery behind it. And when it comes to the meteorite crashing into the car and the helicopter colliding with the cliff, the producers were evidently too cheap to obtain pyrotechnicians to blow real vehicles up and so simply optically overlaid the explosions. Among the other absurdities present is the sight of Barry Corbin, reasonably well cast as a leadbelly politician, outfitted in one of the world’s least convincing wigs.

Lou Diamond Phillips has made a career throughout most of the 1990s doing these B-budget action films and thrillers. By now, he has gotten the heroic certainty and single-minded determination thing down pat and does exactly what is required of him with an able professionalism. The lovely Amy Locane still looks incredibly cute, despite not having done many acting roles since appearing in Cry-Baby (1990) and Melrose Place (1992-9). She gets in there and kicks alien butt alongside Lou Diamond Phillips with an assured determination that at least shows that the action genre would have a welcome place for her should she ever decide to dabble further.

The film is lumbered with two inexpressive titles. The US title Alien Express makes it seem something akin to the galactic railroad concept along the lines of Galaxy Express 999 (1979). The international title Dead Rail suggests nothing more than an eminently forgettable action movie – somebody else has already taken the title Death Train (1992).