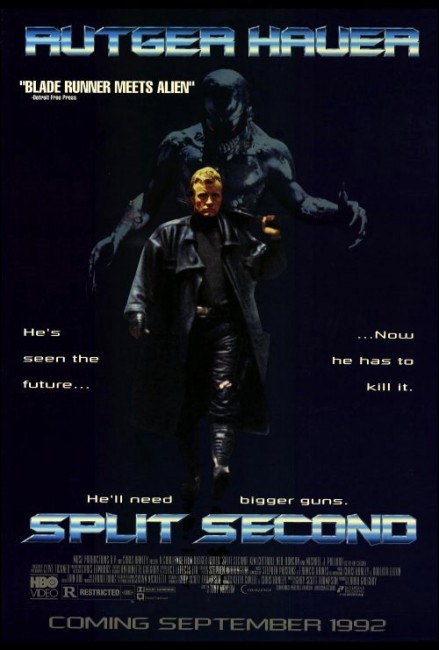 London of 2008 where the city has become partially submerged due to rising seawater levels. Burned-out police detective Harley Stone has premonitions of a series of killings in which the killer eats each victim’s heart and leaves astrological symbols at the scene of each crime. (The same killer also murdered Stone’s partner). Stone is paired with by-the-book Glaswegian detective Dick Durkin and the two realise that the killer they are tracking is not human, that it may even be Satan. Realising that it has a link with Stone as a result of it slashing him during the murder of his partner, the creature begins taunting Stone. It then abducts Michelle MacLaine, Stone’s partner’s wife (with whom Stone was having an affair), as its next intended victim.

This low-budget British production was briefly touted as Britain’s new hope in the science-fiction stakes. However, stories of director Tony Maylam quitting/being fired towards the end of production and the shooting of a new ending by Ian Sharp led to poor advance word. Upon its release, Split Second was given a perhaps over-the-top but almost universal deriding by the few critics who saw it in cinemas and was consigned to the video shelves only about a month after its cinema premiere. In fact, a video release is where Split Second seems more at home – a cinema release would over-stretch the small charms it does have as a mindless low expectation action film with a self-mocking sense of humour. It is not a particularly good film but is not entirely unenjoyable.

The plot delivers an intriguing detective story and piles on an extraordinarily wild concoction of (presumably) alien monsters, serial killers, Satanic rituals, Biblical End Times in-references, precognition and decayed futurism. The most frustrating thing is that all of this has been thrown into the pot by the writer’s fervent plagiaristic mind without ever bothering to concoct any rational explanation for any of it. At the end, for example, one is left unsure whether the creature is an alien or not, and with its sometimes supernatural powers, whether it is The Devil or not.

Part of the problem is a script that started out as a supernatural serial killer film kept getting rewritten at the behest or producers and actors, resulting in a mishmash of elements. The climactic shootout with the creature is a routine finale for all this heated intrigue – we just get another variation on the Alien (1979) alien that is by now starting to look really old hat. The intriguing half-submerged London setting never serves any point in the film.

Where Split Second does have its amusements is in its Odd Couple buddy cop relationship between Rutger Hauer and Neil Duncan, something that is tried and true but is served up with enough amusement to be likeable. Hauer’s burned-out loner character is hilarious – he taking people’s pens to stir his coffee, lighting cigars with a blowtorch he carries for the express purpose – and becomes even funnier when placed up against Neil Duncan’s straightlacedly intense Yuppie cop. The funniest part of all is when Duncan encounters the creature and starts bugging out, while yelling “Big, big guns, get big, big fucking guns,” and the cynical Hauer is left in the position of having to calm him.

One person that the film should have made a whole lot more use of than it does, opting to throw her away on a routine role of no significance, is the perkily sexy Kim Cattrall, who was often the saving grace of a number of forgettable films a good many years before finding success in Sex and the City (1998-2004).

Director Tony Maylam has made a couple of other genre films – the slasher film The Burning (1981) and the modernised The Sins of Dorian Gray (tv movie, 1983). His greatest success was probably the adventure film The Riddle of the Sands (1979). Subsequent to this, Maylam has made the thriller Phoenix Blue (2001) and Journal of a Contract Killer (2008).