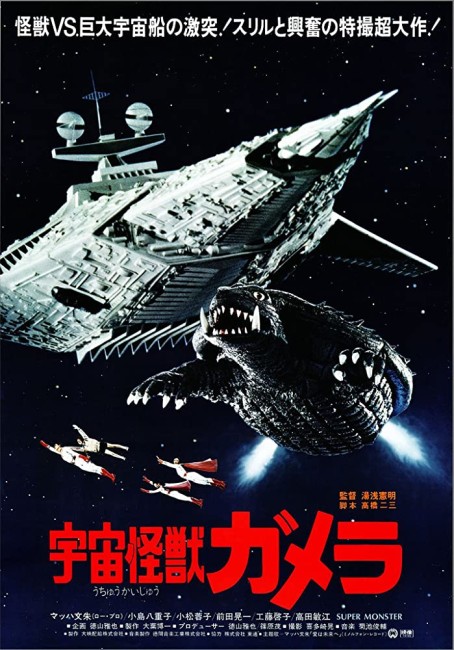 The alien Zenon launch a plan to invade the Earth and start by causing mass destruction with their ray beam. Defending the Earth are three Space Women from the Peaceful Star who adopt everyday disguises and transform into superheroines to go into action. However, the Zenon ray can find them when they are in costume and they are forced to remain in disguise. The Space Woman leader Kilara befriends young Keichi and gives him a turtle from the pet shop where she works. Keichi releases the turtle into the water, wishing that it could transform into Gamera to defend Earth. Surely enough, Gamera then appears where it must take on the various monsters it has fought in the past as they are resurrected by the Zenon. The Zenon also send the woman Giruge to Earth in disguise to stop Keichi and the Space Women.

The Gamera films started as an attempt by Japanese studio Daiei to copy the popularity of Toho’s Godzilla. The series began with Gammera the Invincible (1965) in which Gamera was a standard Japanese monster. A series of sequels quickly followed with the likes of Gamera vs Barugon/War of the Monsters (1966), Gamera vs Gyaos/Return of the Giant Monsters (1967), Destroy All Planets (1968), Attack of the Monsters/Gamera vs Guiron (1969), Gamera vs Jiger/Gamera vs Monster X/Monsters Invade Expo 70 (1970) and Gamera vs Zigra (1971), which became dominated by cheap effects and an increasing pitch towards the juvenile audience with Gamera becoming a heroic defender of Japan against other monsters and alien invaders.

Daiei declared bankruptcy in 1971 due to extravagant financial expenditure by its CEO and with it the Gamera series appeared to come to an end. However, there was one straggler with Gamera: Super Monster here. What happened was that Daiei was taken over by the publishing house Tokuma Shoten and efforts were made to recoup losses by drawing on their previous money-spinners. Subsequent to this, Daiei has passed through several hands and is still producing films today. The Gamera series was successfully revived in the 1990s with full-blooded CGI and animatronic effects in Gamera, The Guardian of the Universe (1995), Gamera 2: Assault of Legion (1996) and Gamera 3: Revenge of Iris (1999), as well as the subsequent Gamera the Brave (2006).

Gamera: Super Monster would be the last Gamera film produced for the next fifteen years and was intended by regular series director Noriaki Yuasa to kill Gamera off at the end. As a result, this has been made on the cheap and is comprised of footage taken from the previous Gamera films (all except Gammera the Invincible because that was in black-and-white and the subsequent films in colour). Toho had done the same with Godzilla’s Revenge (1969), the nadir of the 1960s Godzilla films, but Daiei took it way over-the-top here where all of Gamera’s appearances are represented by stock footage from the other films. To work around this, the film contrives a plot where the invading aliens resurrect all the monsters that Gamera has fought and we are supposed to close our eyes and pretend these are new battles. Elsewhere the film even places Gamera up against animated footage taken from Space Cruiser Yamato (1977) and Galaxy Express 999 (1979).

In actuality, the stock footage is some of the most watchable in the film. All of the new footage – basically that involving the Space Women and the young kid – promptly heads down to extremely bad movie stakes (not that many of the preceding Gamera films had not been down around there as well). These are frequently so beyond surreal that you are prompted to burst out loud in laughter. Much of this centres around the Space Women who conduct hilarious little choreographed dances to turn into their spandex superheroine outfits or in the way they play the electric organ and conduct hand movements to make a viewscreen appear so as to watch Gamera’s battles. They also live in a Kombi van that can take off into the sky and glows when in flight. When young Keichi asks how they all live in the van, he is shown a plastic cat cage (which comes replete with its own carry bag) and they demonstrate how they are able to miniaturise themselves to shrink down to fit in. This is all accompanied by a good deal of bad dubbing.

The film operates on a child-like level (and has clearly been intended for children) – we go from young Keichi being a fan of the Gamera comic-book to his being given a turtle from the pet store that the lead Space Woman (Mach Fumiake) runs; he puts it back into the water and shortly after the real Gamera appears where you get the impression he has somehow either wished Gamera to appear or his turtle to transform into it.

The film was also clearly jumping aboard the space opera fad inspired by Star Wars (1977) a couple of years earlier – as a number of other Japanese films of this period were – and offers up a George Lucas copycat shot of a giant star cruiser rumbling over the camera in the opening shots. (Mindedly, this is a film so cheap that many of the space battles are simply represented by space artwork).