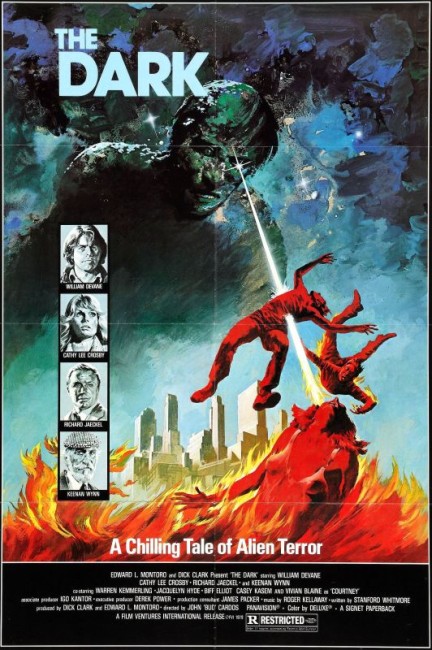 An extra-terrestrial creature that shoots rays from its eyes lands in Los Angeles and stalks the city, ripping the head off one person every night. The police are completely baffled. After his daughter is killed by the creature, Steve Dupree, an ex-con turned fiction writer, teams up with a tv reporter Zoe Owens to track down the creature. Together they follow a psychic’s premonition that the creature will kill a young actor on a particular night and set out to find the actor and thus ambush the creature.

With the amount of money and the number of executive, co-, line and associate producers and production assistants necessary to the making of a film today, one would think that someone along the line would surely notice if it was a turd. Here lies proof that turkey material was not unique to the 1950s and $1.59 Z-movie.

The Dark originally began shooting under Tobe Hooper, then best known for The Texas Chain Saw Massacre (1974). Hooper, who has himself directed some real stinkers from fairly much 1990 onwards, walked off the project several days into shooting after disagreements with the producers. He was then replaced by John ‘Bud’ Cardos, who had previously directed the quite good Kingdom of the Spiders (1977).

Kingdom of the Spiders showed Cardos as a genre director of promise but here Cardos seems barely interested in the exercise. The entire affair has the look, feel and pace of a made-for-tv movie – which is where most of its’ cast found employment during this era. Sequences seem padded out as if to fill running time to the commercial break.

Most of the cast don’t seemed to have even cared to make the effort – William Devane walks through as some kind of middle-class biker with smug and unmoving smile, and Jacqueline Hyde and Keenan Wynn provide enough ham between them that they could feed the entire production crew for a month.

The script is atrociously written, the dialogue so infuriatingly banal and the narrative so indifferently developed that one begins to suspect the screenwriter fell asleep during the writing process. At no point does the script take time to explain why the monster needs to rip off one person’s head a night, shoot rays from its eyes or even explain how such a mindless creature can navigate its way across the stars.

Of course, it is not entirely fair to lump all the problems at the scriptwriter’s door. A large number of these are due to the fact that it underwent a good deal of post-production tinkering. The reason for this is that in the time between when the film was shot and it was released Alien (1979) came out and was a smash hit. In the original version of the script, the creature was supposed to be the zombie resurrected from the Civil War. However, after Alien hit, the film underwent re-editing to turnit into a quick Alien cash-in. All scenes of and referring to the zombie figure wielding an axe to behead its victims were eliminated. Added was one brief effects shot of something coming down from the sky, as well as a few optically superimposed laser beams shooting out of the creatures eyes, all intended to suggest that the creature was now an alien.

John ‘Bud’ Cardos began as a production assistant for Z-movie director Al Adamson. His career, which might have seemed promising on the basis of Kingdom of the Spiders, bottomed out after this. His other genre films are The Day Time Ended (1980), Mutant/Night Shadows (1984) and Outlaw of Gor (1987). One strange peculiarity of the film is that it is produced by Dick Clark, the celebrated host of American Bandstand (1952-89).