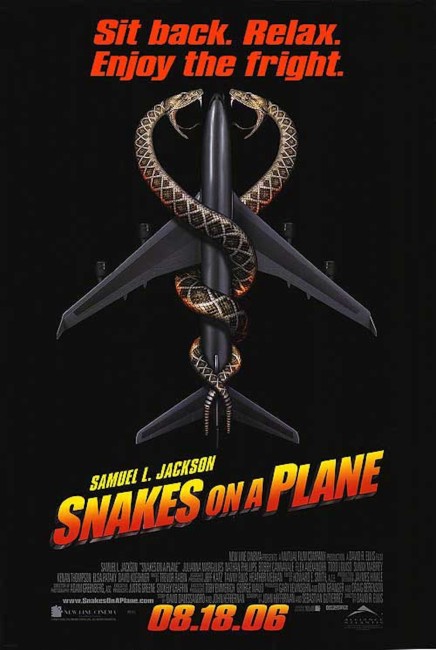 Sean Jones is holidaying in Honolulu when by accident he sees mobster Eddie Kim killing a witness who is due to testify at his trial. This makes Sean a marked man. As Kim’s men close in to kill Sean, he is saved by FBI agent Neville Flynn. Flynn commandeers the first class section of a plane to transport Sean to L.A. to be a witness at the trial. However, Kim’s men manage to smuggle a cargo of poisonous snakes aboard. The snakes are released in mid-flight where they have been sprayed with a hormone that causes them to run rampant through the plane, attacking and killing passengers. With the pilot dead, Flynn tries to contain the threat and get the plane landed.

Snakes on a Plane is an unusual film. According to legend, it started out as an idea concocted over drinks by a group of scriptwriters who tried to come up with the worst pitch they could possibly think of – the concept of ‘snakes on a plane’ being the result. Surprisingly, the pitch ended up being taken seriously and the script bought by New Line Cinema. Snakes on a Plane then had the unique distinction of becoming a cult film before it had even opened on cinema screens. Part of this was due to New Line’s judicious marketing strategy that pitched Snakes on a Plane to internet audiences, selling it as a film that fell between the cheesy and entertainingly bad. There was also an hilarious publicity flier, which had been mocked up to look like airline instructions for emergency procedures. Of course, the buzz and pre-release cult that surrounded Snakes on a Plane was something that promptly flopped upon the film’s opening, where it succeeded in earning below what industry insiders had estimated.

It is a surprise that Snakes on a Plane ended up on the big screen at all, not to mention with a major, simultaneous worldwide release and an A-list name like Samuel L. Jackson attached. In actuality, Snakes on a Plane is a B movie that in all other circumstances would have been released direct to video starring has-been tv actors and with CGI work from a third rung effects house. It is the sort of film that is best intended for watching on video/dvd over a few beers. Certainly, in exactly the spirit that it was intended, Snakes on a Plane proves rather entertaining.

Director David R. Ellis, a former stuntman who previously directed Final Destination 2 (2003) and Cellular (2004) and subsequently went onto Asylum (2008), The Final Destination (2009) and Shark Night 3D (2011), approaches the film with tongue squarely planted in cheek and gives it an absurdly silly tackiness that proves highly entertaining. The first victims to be bitten are naturally the couple who venture into the toilet to join the Mile High Club where the snake leaps out and attaches itself right onto the nipple of the woman’s undeniably impressive breast. Next up is a guy who goes to use the bathroom, unzipping himself while greeting his penis “How’s my big boy?”, only for a snake to leap out of the toilet bowl and grab his crotch.

These are followed by a host of entertainingly absurd scenes:– a sleeping woman enjoying the caress as a snake slithers up her dress and then top; snakes appearing out of oxygen masks as they fall down; out of barf bags; out of a lady’s handbag; throttling a chihuahua. It is almost as though the writers have sat down and tried to think of as many plane-themed places out of which they could snakes have appear.

You can tick off the clichés as they come up – the search for a doctor aboard the plane and the inevitable point where someone gets to ask “Is there anyone that can fly this plane?” Certainly, David R. Ellis generates a reasonable degree of tension throughout. Snakes on a Plane is best compared to the other disaster movie that came out the same year – Poseidon (2006), which promptly sank without a trace. Where Poseidon wheeled out the clichés and concentrated on big flashy effects sequence and bored everybody to death as a result, Snakes on a Plane wisely heads straight to B movie territory and determines to have good fun – and largely succeeds.

Certainly, you can see there are times that Snakes on a Plane is trying hard to be culty. In particular, Samuel L. Jackson is outfitted with an arsenal of lines that are designed to be quotable – “Snakes on crack!” or “Enough is enough. I’ve had it with these motherfucking snakes on this motherfucking plane!” These sit on a line between the amusing and the self-consciously silly. Although by the point of the climax where the only person that can land the plane is the videogame junkie who has only racked up time on flight simulator games, the balance does topple over into just being silly.

On the other hand, Snakes on a Plane demonstrates that try as they might, people attempting to make a deliberately bad film are still outclassed by efforts that never set out to be bad in the first place. The central idea of Snakes on a Plane was far outdone in this regard by the trilogy of films begun with Turbulence (1997), featuring a serial killer on a plane, and in particular by its sequels Turbulence 2: Fear of Flying (2000) where a group of aviatophobics have to deal with terrorists and chemical weapons aboard a plane flight and Turbulence 3: Heavy Metal (2001) where Satanists hijack a plane aboard which a Marilyn Manson-lookalike is performing a rock concert. However, all of these are far outstripped in terms of sheer nonsense by Tail Sting (2002), which featured mutant scorpions aboard a plane.