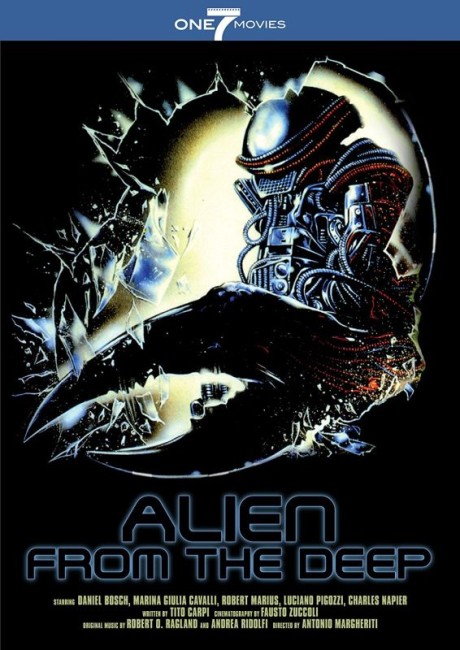 The environmentalist Jane and her cameraman smuggle onto a tropical island to investigate the activities of the E-Chem plant. They obtain video proof that shows that instead of decontaminating radioactive waste E-Chem is dumping it into the island’s active volcano. They are discovered and pursued by the company’s mercenaries. A mysterious snake venom farmer aids Jane in her flight. They are then witnesses as an alien emerges from the nearby lake and kills all as it heads to the plant, drawn to the nuclear waste.

Antonio Margheriti was a prolific Italian director, usually known under the Anglicised pseudonym Anthony M. Dawson. Margheriti moved through most of the Italian exploitation cycles – the giallo psycho-thriller, the continental Gothic of the 1960s, the sword and sandal cycle, the 1960s spy film fad, the cannibal film, the 1980s sword and sorcery fad and the Italian space opera – in a career that ranged from the 1950s to the 1990s. Margheriti was nearly 70 at the time he made this Alien (1979) ripoff, his second-to-last film before he died in 2002.

Alien from the Deep is routine in almost every conceivable way. What is perhaps surprising is just how dated it is. The script uses old hat explanations, some of which have not been in use for a good thirty years. The alien is a standard 1980s ripoff of H.R. Giger but this sits alongside atomic energy threat themes from the 1950s and 1970s ecological concerns. Margheriti maintains the film passably during the chase through the jungle but it is otherwise uninteresting. The alien, for instance, is never seen right up until the end as anything other than a giant claw.

Many of the pitfalls of the Italian B-movie are also present. There is bad acting – most notably that of the unnamed person playing the missionary. The dubbing/dialogue provides a number of unintentional howlers – “Now we will have some singing,” the missionary announces to his native congregation; “Don’t you touch me, you snake squeezer,” the heroine tells Daniel Bosch at one point.