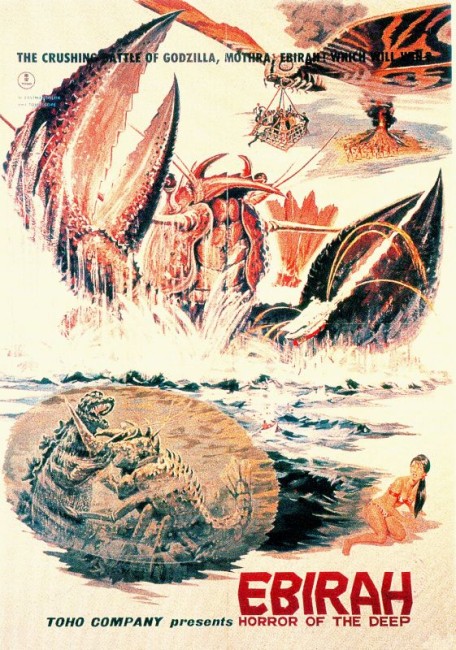 aka Big Duel in the North Sea; Ebirah, Horror of the Deep

Two friends meet a strange man at a dance marathon. He persuades them to join him in searching for his missing brother. He steals a boat and sets out to sea with them aboard. However, they are shipwrecked in a storm and wash ashore on an island. There they find a criminal organization is covertly attempting to build atomic bombs. They also find Godzilla in suspended animation and succeed in reviving him by rigging a lightning rod. Godzilla must then take on Ebirah the giant crab monster that guards the island’s waters.

Godzilla vs the Sea Monster was the seventh Godzilla film. It came at a time when Godzilla was making the turnaround from A-bomb Avenger to cartoon defender of Japan. This was also the first entry in the series that Ishiro Honda did not direct. Instead, the director’s chair had been inherited by Jun Fukuda. Jun Fukuda would inherit the sole directorial control of the series following Honda’s retirement in the 1970s and during this time delivered the series’ two worst entries Godzilla vs Gigan/Godzilla on Monster Island (1972) and Godzilla vs the Cosmic Monster (1974).

Godzilla vs the Sea Monster is a weak and colourless entry in the series. The plot is lazily slung together. The English-language release is even further impaired by slack dubbing and shabby subtitling – a control on a ship is labelled ‘Ahed’, for instance. A bumbling dimwit has been thrown in among the less-than-one-dimensional characters for comedy relief. The model work is far more shoddy than usual – the water effects are sloppy and no consistent size difference is ever maintained between the monsters, especially in the attack on Godzilla by the planes, which he happily crushes one at a time in a single paw.

The film certainly reaches an entertaining level at times – when Godzilla and Ebirah arrive at their central battle it starts off as a game of soccer with a rock, then Ebirah starts splashing water at Godzilla and in their final battle Godzilla gets mean and bites Ebirah’s claws off. It becomes progressively more silly – Godzilla crushes fighter planes by clapping his hands and slapping them with his tail; he then beats the shit out of a flying buzzard (which appears out of nowhere and has no other purpose in the film) and dispatches it by radioactively torching it and sending it down in a cloud of charred feathers. Jun Fukuda raised the standard somewhat with his next entry, the likable Son of Godzilla (1968), but from this point onwards the Godzilla series was well on its way down to a juvenile level.