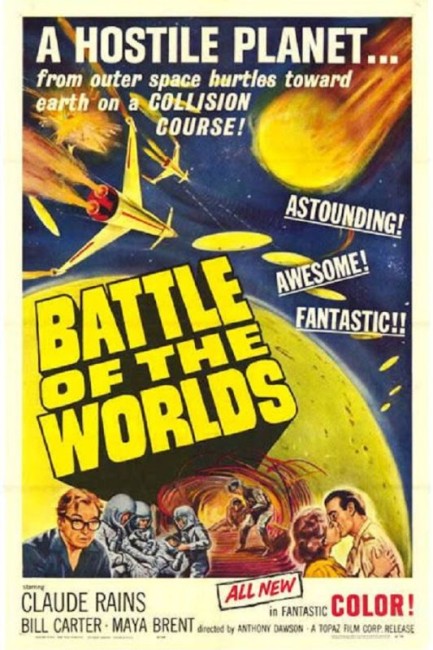 Scientists at an observatory on a remote island discover a planet nearing Earth. Fred Steel pricks up the courage to go to the brilliant but cranky Professor Benson with the information, but Benson has already predicted what they know and moreover correctly guesses that the planet, which he has named The Outsider, will go into orbit around Earth. Unmanned rockets are sent to investigate but are destroyed by a fleet of flying saucers launched from The Outsider. The only means of defeating the threat is for a team to land on The Outsider and confront the alien menace.

Antonio Margheriti is an extremely prolific director within Italian cinema, having made films in numerous Italian exploitation genres from the giallo psycho-thriller to the Gothic horror films of the 1960s, the sword and sandal cycle, the 1960s spy film craze, and the 1980s the cannibal and sword and sorcery fads. Battle of the Worlds was one of a number of space opera films that Margheriti made during the 1960s. The others, some of which take place in the same future, include Assignment Outer Space (1960), War of the Planets (1965), The Wild, Wild Planet (1965), War Between the Planets (1966) and The Snow Devils (1967).

Antonio Margheriti’s science-fiction films seemed perpetually on the verge of achieving some grandly colourful pulp poetry but always ended up being scuppered by cheap budgets and the pedestrianness of Margheriti’s direction. Battle of the Worlds suffers from the usual poor dubbing of Italian B-budget films, which has clearly been conducted by people who are non-native English speakers. There is some pricelessly terrible dialogue – the wife who tells the husband as he is about to depart on the mission: “I want to be one of those buttons,” while suggestively caressing a console, or the epitaph offered for Claude Rains’s scientist: “Poor Benson – if they opened up his chest they’d find a formula where his heart is.”

The film’s greatest crime is simply that it is slow and talky and almost nothing happens. The planet arrives, some UFOs appear, a rocket mission is launched to investigate – but once the astronauts get there nothing happens at all, the inhabitants of the planet are found to be dead and then the planet blows up. Exactly who was piloting the UFOs if all the inhabitants are dead is a question left unanswered. There is some occasional cheap atmosphere during some of the ventures into the planet’s caverns – tunnels of red vein-like tubes, caverns of dead bodies and the encounter with a brain sphere. However, in terms of what has been built up – mystery planets, invading UFOs – the arrival on the planet is underwhelming to the point of total letdown.

On the plus side, Battle of the Worlds is stolen in large part by Claude Rains, the only recognisable name present, who has clearly been imported for transatlantic marquee value. Claude Rains plays to the audience with an amusingly crusty crankiness, delivering almost the entirety of his performance while seated in a hammock in a conservatory. He is clearly having fun and, amid the bland, lifeless other actors in the cast, gives the film the only vitality it has.