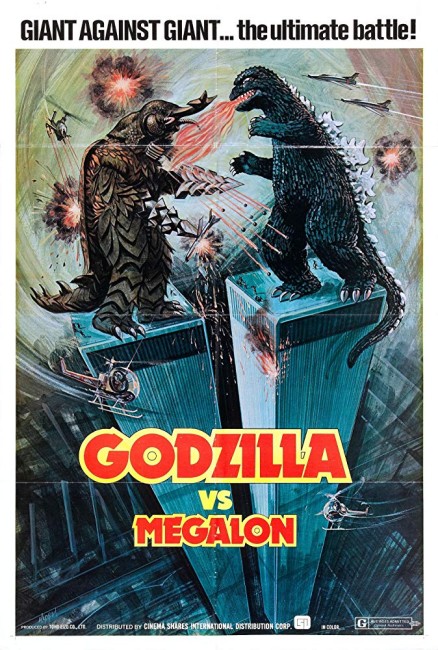 Atomic tests in the Aleutians cause the lost land of Seatopia to rise to the surface. The Seatopians steal the experimental robot Jet Jaguar and send it, along with the monster Megalon and later the space monster Gigan (which has been sent by invading aliens to help the Seatopians), to destroy all surface-dwellers. Jet Jaguar’s creators manage to regain control of it and send it to Monster Island to obtain help from Godzilla. Godzilla and Jet Jaguar then take on Megalon and Gigan in a massive tag team showdown.

Godzilla vs Megalon was the thirteenth Godzilla film. It was the fourth entry in the series for director Jun Fukuda. Jun Fukuda was fairly much singlehandedly responsible for dragging the Godzilla series down to a juvenile level. Fukuda first entered the series with the dreary Godzilla vs the Sea Monster/Ebirah, Horror of the Deep (1966) and then went onto the likable Son of Godzilla (1968). However, Son of Godzilla took the tone of the series down into something oriented towards children and it stayed that way for the remainder of the 1970s. Jun Fukuda’s next effort Godzilla vs Gigan/Godzilla on Monster Island (1972), made just prior to this, was pathetic. With Godzilla vs Megalon, one can clearly see that Fukuda and the Toho production team are not longer taking themselves seriously – which was surely the only place the Godzilla series had left to go.

Some attempts are made at the beginning to connect up to the original metaphor of Godzilla as atomic avenger and draw parallels between Seatopia and atomic testing in the Pacific but this is happily forgotten in the cartoonish absurdity that follows. There’s a nutty slapstick chase early on in the piece that ends with a cycle rider being splattered in paint, which clearly signals that we are not in for a straight treatment. Things become so progressively silly that by the time of the climactic battle Fukuda has entered the out-and-out farcical.

However, this is actually something that works in the film’s favour – Jun Fukuda’s films seem to be a lot more entertaining when he is making no effort to take them seriously. There is no sight more colourfully ridiculous than the giant climactic tag team wrestling match that takes between a cyclopean buzzard (Gigan from the previous film); the baby-faced Godzilla, who pouts and tries to look angry; a giant cockroach with drills for hands that shoots rays from the top of its head (Megalon); and a conehead android reminiscent of Japanese tv’s Ultra Man (1966-7) decked out in psychedelic rubber (Jet Jaguar). The scenes of the four of them beating the shit out of each other are a hoot – the villains are the ones who kick the good guys when they are down and rub their claws in glee; Megalon gets to kangaroo hop on his opponents; and in one hilarious moment, Godzilla does a flying dropkick while sliding along on his tail.

Decidedly creative use is made of ‘Ancient Mysteries’ – the heads on Easter Island are said to be three million years old, while Mu and Lemuria are taken as being actual places. Dancing naiads in white bikinis and transparent plastic macs, and a nutty pop song called Jet Jaga, which has been left undubbed, adds to the surrealism. The effects are surprisingly some of the best of the series during this era. Sublimely silly.